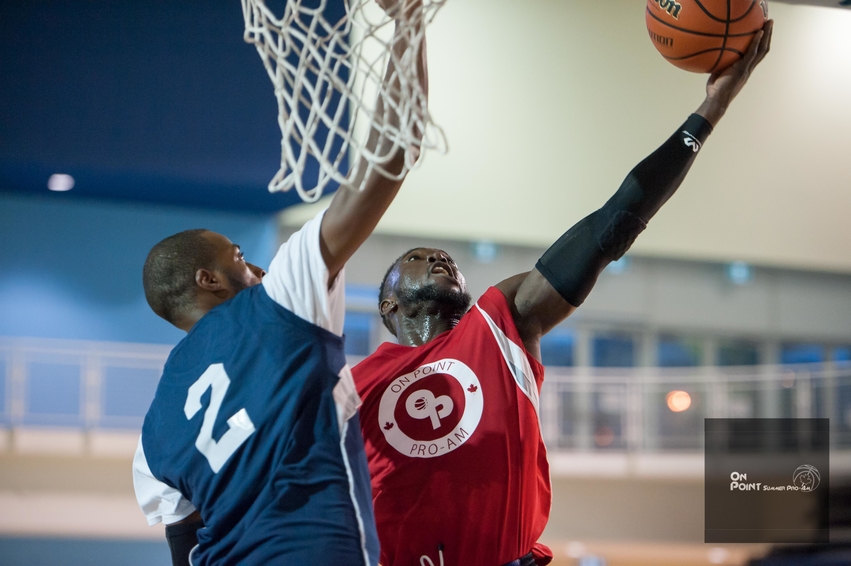 The game was relatively close throughout the first half with Starting 5 only up six at halftime before pulling away in the second half.

Forward James Siakam led Starting 5 in scoring and rebounding, finishing with 16 points and 10 rebounds. Forward Jahmal McQueen (14) and guard Tamoy Lewis (12) joined him as the other Starting 5 players in double figures. McQueen also had a game high five assists and a team high three steals in the win.

For United, it was forward Rick Bodiford who led the team in scoring for the second straight game with a game high 19 points. He also finished with a double-double, pulling in with a team high 10 rebounds. Russell Baker (14) and Ali Validipak (12) were the two other United players that scored in double figures. Baker had a game high four steals in the loss while Jameel Williamson had a team high four assists.

“We’re playing together as a team,” McQueen said about his team’s effort over the past two games. “We’re also playing defence and are playing selfless.”

With the win, Starting 5 clinched the second seed and play On Point with a chance at the final. For United, however, their season has ended.

On-Point had a chance to go undefeated and clinch the top seed in the playoffs.

Toben guard Gilbert Gyamfi, though, had other plans.

“We were in a little bit of a slump at the end of the first half; we were down guys,” Gyamfi said. “I just wanted to give us some momentum heading into the second half.”

On Point will settle for the third seed and play second seeded Starting 5 for a spot in the final.

Two other players scored in double figures for Toben as forward Lien Phillips had 19 points while guard Felix Adjei had 12 points, with a game high four assists. Centre Taylor Dowhanuik had a game high 10 rebounds and two blocks in the win.

For On Point, forward Marko Curic and guard Alastair Cole led the team with 12 points each; Curic also finished with a team high eight rebounds. Newest addition, point guard Juevol Myles was the only other On Point player that scored in double figures; he finished with 11 points. Guard Kenny Ejim had a game high three steals while guard Sefton Barrett had two blocks in the loss.

A cold shooting second half came back to haunt On Point as they shot just 26.3 per cent from the floor.

Toben started off hot as they jumped out to an early 8 point lead. However, On Point, buoyed by a 12-0 run, took the lead after Joel Ndondo’s dunk on Dowhanuik. Eventually, On Point took a 39-33 lead into the half. Myles led On Point with nine points while Gyamfi kept Toben afloat with 16 at the half.

The second half saw Toben take the lead for good, as they scored 10 straight points to take a 45-41 lead. Although On Point cut the lead to one on several occasions, they had no answer for Gyamfi as his ferocious and-one dunk (Play of the Week) gave Toben the momentum they needed to seal the win.

Both teams had a lot on the line. A win for either team and they would advance to the postseason.

In the end, it would be M.A.D.E that earned the a trip to the final four.

Despite almost giving up a huge lead, M.A.D.E (2-1) led wire-to-wire in winning 92-87 over X-Men (1-2). M.A.D.E bounced back from a disheartening loss against Starting 5 the previous week and clinched the fourth seed. They will face a tough Toben team for a spot in the final.

Guard Kyle Johnson, buoyed by a hot start to the game, finished with a team high 25 points for M.A.D.E on the strength of five three pointers. Guard Jaylen Babb-Harrison helped out with 22 points on four threes made while guard Kaza Keane had 10 points along with a team high tying three assists and a game high four steals. Center Cavell Johnson was a defensive terror in the paint, ending up with a team high eight rebounds and a game high six blocks in the win. Junior Cadougan also suited up for M.A.D.E. and pitched in 9 points and 3 assists.

“At the end of the day, as a competitor, you want to be in the playoffs,” Johnson said. “It feels good.”

As for X-Men, their season has ended, although they did not go down without a fight. Forward Jayden Frederick dropped a game high 29 points and also had 11 rebounds along with a team high three steals. Guard Julius Antoine, behind a hot shooting second half, had 21 of his 25 points in the second half and hit six triples in the loss. Guard Kendal Wilson and Center Khalil Miller each finished with 10 points. Miller was also a monster in the paint tallying a game high 17 rebounds and a team high five blocks.

M.A.D.E relied on the long ball for the win as they hit 14 triples, four more than X-Men. They also shot a sizzling 53.8 per cent from the field in the second half to stave off X-Men’s comeback attempt.

M.A.D.E scored the first 17 points of the game and went up by as many as 18. Johnson had 10 points during that run alone. However, M.A.D.E went the rest of the first half cold as X-Men chipped away at the lead and were only down 36-33 heading into the break.

X-Men then cut the lead to as little as a point before M.A.D.E pulled away to lead by as many as 14 in the second half. However, with Frederick’s steady scoring and Antoine’s hot shooting, X-Men continued to hang in there, cutting the lead to 83-79 at one point.

With five straight points from M.A.D.E, however, combined with Antoine fouling out, it became too little too late.