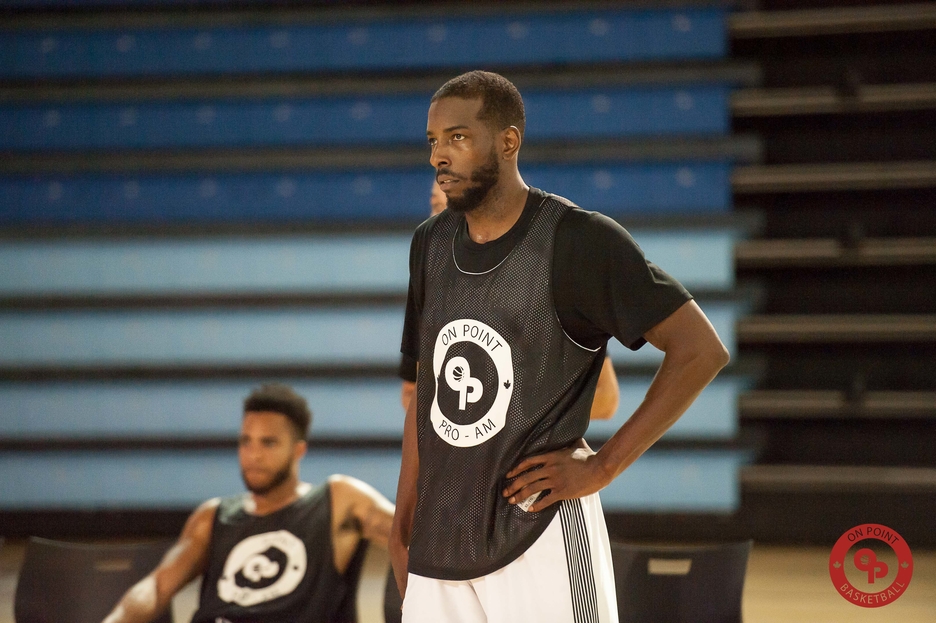 By Kajan ThiruthanikasalamJuly 25, 2018No Comments

The regular season, after many twists and turns during Week 3, came to an end Wednesday night as Week 4 of the On Point Summer League Pro-Am saw the playoff picture clear up. However, it wasn’t as expected.

The stars were aligning for Team On Point to finish undefeated heading into the playoffs as they were facing a Toben team, reeling after a last-second loss to United in Week 3. And with Toben’s roster so short handed in the beginning, it looked like this game was On Point’s to lose.

Despite trailing by eight early on though, Toben pulled off the win using its hot shooting from the field.

“We usually slowed down in the second half (before) and other teams play even better (in the second half),” Dinjyl Walker said. “Our whole thing is to have two great halves and we feel like we can come away with any win.”

Toben shot 55 per cent from the field and had five players score in double figures, led by Walker’s 21 points, as they defeated On Point, 94-84, in the first game of Week 4. Shane Osayande scored 16 points while Stefan Nastic had 14 points and 10 rebounds. Anthony Ottley Jr hit three triples and scored 13 points while James Siakam had 10 points and two blocks in the win.

With the win, Toben clinched the top spot in the regular season for the second year in a row.

“As long as we’re here, playing our game, and playing hard defensively, I think we’ll get right back to the championship,” Walker said. “The goal is to win a championship.”

Jamal Reynolds led all scorers with 28 points for Team On Point while Jalyn Pennie had 18; both of them led the team with seven rebounds each. Alex Johnson had 16 points and a game high five assists along with four steals while Alastair Cole scored 11 points.

Notable in this game was the play of Kaelan Rose, the stats keeper who had to fill in due to depth issues for Toben. Rose finished with eight points, as his offense early on kept Toben afloat. His layup to start off the game ended a season long run for On Point in which they never trailed.

“I didn’t even know we picked him up. When I came in, I was surprised myself,” Walker said about the play of Rose. “He came in hot and did his thing. We needed him to get this win.”

Ottley came alive to end the first half, hitting three late from downtown, as Toben closed the half on an 22-6 run to take a 50-38 lead heading into intermission, despite Reynolds’ 14 first half points.

“That was huge,” Walker said of Ottley’s shooting run. “He’s our scorer so when we needed him to get us going, he always pulls through. And for him to hit three threes in a row like that, that really gave us a boost going into the next half.”

A triple from Walker extended Toben’s lead to its largest of the game at 15 (63-48) but On Point would not go away, chipping away at the lead for the rest of the second half. However, the closest that On Point got to was four as Toben managed to pull away and get a much-needed win.

“They were pressing us and we started to get a little frantic on the press,” Walker said. “Our main goal was just to slow it down and play at our own pace, which we were doing for the first half. That’s what got us back on track.”

Team On Point, for the second year in a row, finished second in the Pro-Am regular season.

X-MEN INTO THE SEMIFINALS FOR THE FIRST TIME

Heading into this game, X-Men had a slight edge for the last playoff spot over M.A.D.E., by a single point in terms of point differential. In order to clinch a berth regardless of anything else, they needed to win by at least 12.

They did that, and then some.

A 46-34 edge on the glass and a 19-6 margin in the assists column helped X-Men pull away from Starting 5 in the second half. They clinched a playoff spot by winning, 74-56, for the first time in the Pro-Am’s two-year existence.

Jayden Frederick led all players with 32 points and 10 rebounds, wowing the crowd with numerous high-flying dunks in transition, including the dunk of the season, when he threw it down over a helpless Starting 5 defender.

“My knees were feeling nice tonight,” Frederick said sheepishly, grinning. “My teammates were finding me with beautiful passes and I just had to dunk it.”

Frederick became the first player this season in the Pro-Am to reach the 30 point mark in a game.

He had help, however, as Kevon Parchment stuffed the stat sheet with 14 points, nine rebounds, and five assists. Joseph Wani had 10 points and six rebounds and most notably, connected with Parchment on several plays whether it was him finishing or playmaking.

“We’ve played together since Grade 8,” Parchment said about the connection he has with Wani on the court. “We know how to read off each other and try to use that to our advantage.”

Davion Parnsalu finished with a game high six assists and led X-Men with three steals in the win. X-Men won despite shooting 37 per cent overall, including 17 per cent from behind the arc.

“It’s big for us because we know that we can definitely shoot better,” Parchment said.

Kennedy (12 points) and Frederick (14 points) both had huge efforts for their teams as it was a tight back-and-forth affair in the first half. Seven straight points from Frederick, however, gave X-Men a 32-28 lead heading into the break.

Asher Lewis then hit a pair of triples, with a layup from Wani sandwiched in between, to tie the game at 34 but a layup from Parnsalu sparked seven unanswered points from X-Men to take the lead for good. X-Men took control from there on out, extending their lead to as many as 21.

“We just found our rhythm, moved the ball, and found the hot hand,” Parchment said of that second half.

“We started running in transition and finding guys open,” Frederick said. “We also started to put the energy on defense and from there, it was a wrap.”

X-Men will likely be the underdog in this playoffs against On Point or Toben, given that they would either be the third or fourth seed, depending on the final game of the night. So what needs to be done to pull off a shocking upset?

“We’ve got to play a complete game in order to beat them,” Parchment said. “For the full 32 minutes, we’re going to have to play hard, share the ball, and defend.”

“Defense is going to be the biggest thing for us,” Frederick said about the postseason. “Offence will go regardless but defence is going to win us the game at the end of the day.”

The question for X-Men now would be: Who would they play? And that all depended on what happened next between M.A.D.E., and United.

JAYLEN BABB-HARRISON PUTS ON AN HISTORIC PERFORMANCE AS M.A.D.E. ADVANCES TO SEMIFINALS

Both of these teams headed into the final regular season game on a high note.

M.A.D.E. got a much-needed win against Starting 5 while United pulled off the upset against Toben in Week 3.

For United, it was simple. Win and they advance. For M.A.D.E, they would have to win by at least seven in order to advance, given that X-Men clinched a berth earlier in the day.

In the end, it was M.A.D.E., who pulled it off and clinched the last playoff spot in the Pro-Am with an 86-73 win over United, on the strength of a red-hot shooting performance from Jaylen Babb-Harrison.

“It feels good; I knew that the big game was coming,” Babb-Harrison said about his performance. “I’ve been shooting all my life so I knew they were going to drop eventually.”

Joel Ndondo finished with a double-double, scoring 20 points and grabbing a game-high 12 rebounds in the win. Duane Notice had 15 points, nine rebounds and three steals, while he and Darnell Landon each dished out a team high three assists.

“Makes my job a lot easier; all I have to do is just spot up,” Babb-Harrison said of Landon and Notice’s playmaking abilities. “They’ll break down the defense and find me.”

M.A.D.E. hit six more triples (12-6) and five more free throws (12-7) than United despite losing 36-33 on the glass. They clinched a berth after losing the first two games of the season.

“We just had our backs against the wall; every game was a must-win situation,” Babb-Harrison said. “That’s what ramped up the intensity and we’ve just got to keep it rolling from here.”

Despite great moments in the season, United were eliminated from playoff contention by way of point differential. Booster (Warsame) Mohamed led five United players in double figures with 20 points while Week 3 hero Khalid Abdel-Gabar had 16 points.

Khalid Adam had 13 points while Yusuf Ali scored 10 points along with three steals and Diew Moses filled up the stat sheet with 12 points, nine rebounds and four assists in an impressive very performance.

Babb-Harrison started off the game with a triple in a sign of things to come as he scored 11 of M.A.D.E’s first 13 points. They eventually extended their lead to as many as 14 in the first half.

But a free throw from Ali, after a technical foul called on Freddy Appiah and a buzzer beating layup from Adam gave United some momentum that saw them only down by 10 at the half.

However, in the second half, it was the Babb-Harrison show. The former Eastern Kentucky player hit six straight triples, all of them of the wide-open variety

“Yeah, I actually was,” Babb-Harrison said when asked if he was surprised that he had clean looks. “If I’m wide open, I’m going to hit the shot.”

M.A.D.E. were up by as many as 26 before United clawed back and made the final score eventually look respectable. After a huge win in which they led wire-to-wire, M.A.D.E finished fourth by way of point differential and now await top seeded Toben in the semifinals.

“Defensive intensity and staying locked in on defense is all that really matters,” Babb-Harrison said on what needs to go well in order to beat Toben. “We’ve got great offensive players so the offense will take care of itself.”

[ON POINT PERFORMER OF THE WEEK]

The playoffs are underway on July 25 as four teams will be fighting to see who advances to the championship game.    Top seeded Toben looks to get back to the title game with a win against fourth seeded M.A.D.E., marking a rematch of last year’s semifinals. And although Toben won, 93-68, in Week 1, M.A.D.E comes into this game with a lot of momentum, having won two straight and with most of their roster back.

Team On Point looks to continue their journey to repeat as champions in their semifinal matchup against third seeded X-Men. And although On Point has four guys that can go off for 20 at any given moment combined with big game experience, a red-hot Jayden Frederick will be a handful for On Point to stop.

Both these games should be fun. Stay tuned!

SPECIAL THANKS TO OUR SPONSORS/PARTNERS: Eye Studio TO, Paper, Crane & Co., Wavv Global and the Pro Am Official Healthcare Provider The Health Institute (THI). Also thanks to the Toronto Pan Am Sports Centre and it’s staff for going above and beyond.