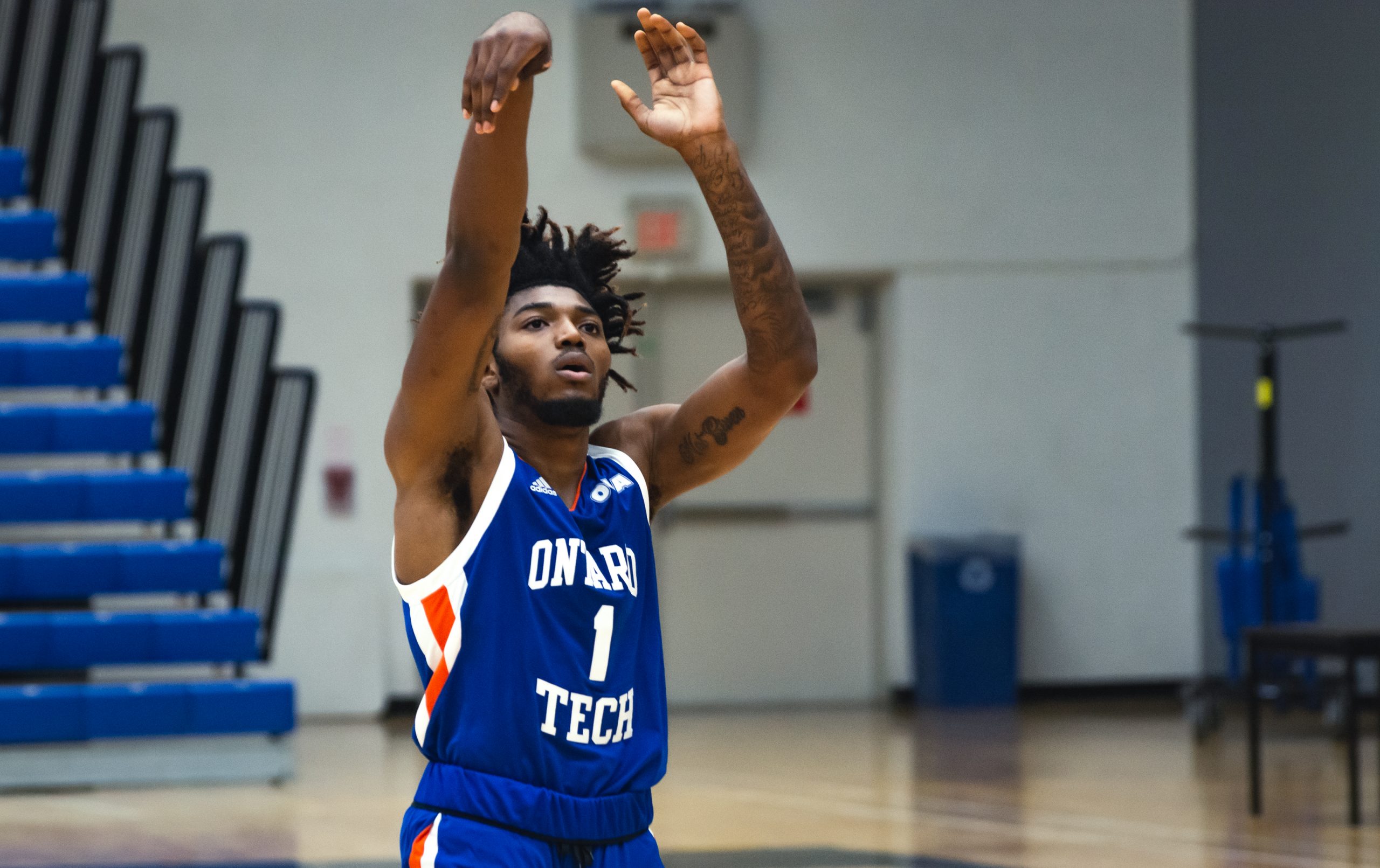 By Shaun McLeodJune 4, 2021No Comments

A couple of weeks before the Canadian Elite Basketball League’s U Sports draft, Graddy Kanku was leaving practice at the Campus Recreation and Wellness Centre at Ontario Tech having just lost a close game at the scrimmage.

Always the ultra-competitor, Kanku was replaying the practice in his head, upset at the thought of losing.

His phone lit up with a text mid-thought. It was a member of the Ottawa BlackJacks’ coaching staff asking him if he was free to talk.

Kanku, who was the first recruit in Ridgebacks men’s basketball history, answered promptly.

“I was like ‘yeah! give me a time,’” said Kanku. “That instantly boosted my mood. I just lost a game (at practice) and I’m kind of mad about it…now I’m getting calls from the BlackJacks talking about possibly drafting me?

While the Ridgebacks only won one game in their first year as a program, Kanku was the face of the team, averaging 20.4 points, 5.2 rebounds and 3.3 assists. He was named on the Ontario University Athletics (OUA) All-Rookie team and was the Ridgebacks’ Male Freshmen Athlete of the Year.

After a series of interviews and phone calls, including some with general manager Jevohn Shepherd, the BlackJacks selected the high-flying guard with the fourth pick in the third round of the draft bringing him back to the city where he won the National Preparatory Association (NPA) National Championship in 2017 with Canadian Topflight Academy during their inaugural season.

“Honestly, I don’t think a lot of people remember me (in Ottawa),” he said with a laugh. “I’ve been away from the city for so long.”

Kanku took home the NPA Finals MVP honours after putting up 29 points in the championship game before heading south of the border to Archbishop Carroll High School in Washington, D.C. for his senior season.

Despite his humble response, Kanku says he’s grateful to be able to spend time with his mother who moved to Ottawa with him and his siblings when he was a teenager.

It’s been over a year since Kanku’s last official basketball game where he posted 22 points in a loss to Lakehead but throughout the pandemic, he’s found his way onto basketball courts, indoors and outside, whenever the public health guidelines allowed for it.

During extended periods of the lockdowns, he took up running and found alternative ways to keep in shape while working out in his home.

“I just tried to keep my legs fresh and core tight,” said Kanku. “It was really about coming up with alternatives and keeping my mental well-being.”

Over the past year, Kanku has worked on developing his jumper into a consistent part of his offence and continuing to improve on the defensive abilities he flashed at Ontario Tech with multiple highlight chase-down blocks. For Kanku, this involves developing a “who wants it more?” mindset, something he believes can’t be taught.

“When it comes to defensive development, it’s more of an effort thing,” said Kanku.

No matter what head coach Charles Dubé-Brais asks of Kanku, he says he’ll be ready to contribute in any way he can ­– from ball handler to role-player – when his name is called.

“I really want to make this a special season,” said Kanku. “I feel like I have so much juice in me right now.”

While Kanku’s eyes are set firmly on the upcoming CEBL season, the OUA has announced their board of directors has approved a plan to return to play in the fall.  The Ridgebacks have transformed their roster over the course of the pandemic, adding depth in the form of former Carleton Raven recruit Anthony Pate and OCAA sharpshooter Khaleek Bakari-Whyte to complement their star player.

“It’s so exciting, this year has been a roller coaster…it’s been really hard,” said Kanku. “To know this coming fall there may actually be a season for us, that’s amazing.”