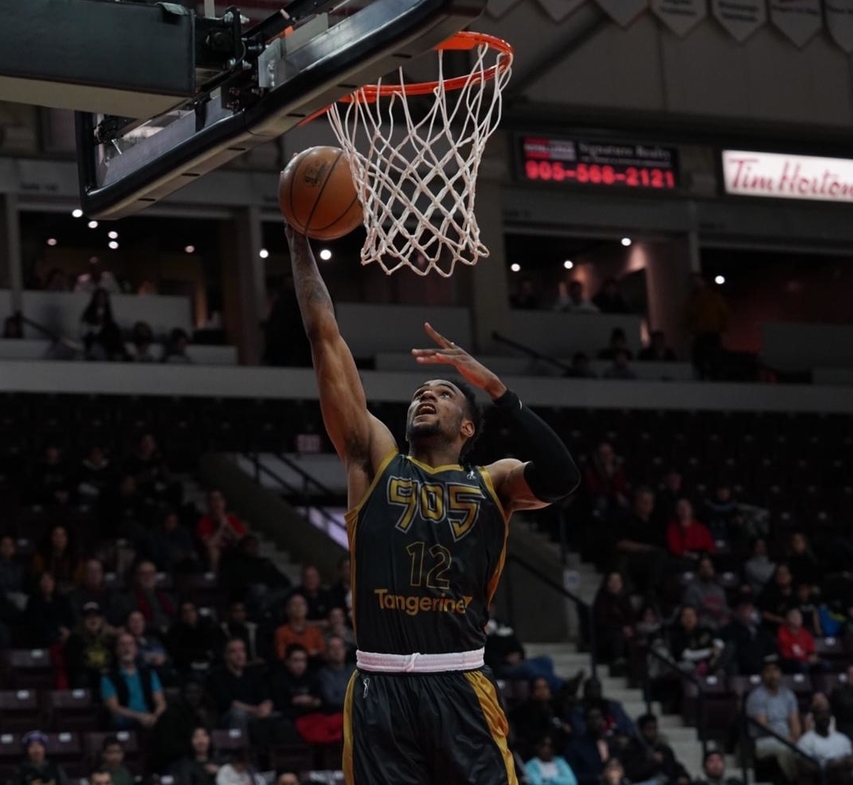 By Harley KockJanuary 21, 2020No Comments

(Mississauga, ON) – “We’re in basketball games but now we gotta close them out,” Head Coach Jama Mahlalela on the 905’s season so far. Oshae Brissett had himself a great night but it didn’t transfer to his team as the Raptors 905 lost 112-105 to the Lakeland Magic. 34 assists on 43 made field goals for the Magic as the 905 defense couldn’t do much to stop them.

Brissett opened the scoring for the 905 with a shot from deep. Unfortunately early on the Magic had control. Devin Robinson had two turnovers and Lakeland took advantage up 10-5, just four minutes into the first.

A 17-4 run ensued. Highlighted by threes from Tyler Ennis, Paul Watson Jr. and Matt Morgan. That put the 905 out to a 22-14 lead. Their defence was tightening up, playing aggressive on ball screens. The Magic were forced into a timeout to figure their offence out.

It seemed to work as they got into a better flow. The bigger problem for the 905 was when Ennis checked out so did their ball movement. They really laboured to get open shots. With time winding down Brissett capped off an excellent first quarter with a triple. After 12 it was 30-24. Brissett led all scorers with 11. “Whenever the ball finds me I’m gonna try to make the best play,” was what Brissett said of his mindset.

His dominance continued in the second. Another make from deep, his fourth of the game. A trip to the free throw line had Brissett up to 16. The Magic were really struggling defending the pick and roll. Through five minutes it was 45-35 and the 905 were getting any shot they wanted.

But it was Lakeland who went on the next big run. 15-6 over the next few minutes had them right back in the contest. Josh Magette was carving up the 905 defence that was playing so well earlier. Magette was into double digit points with 11 and dished out six assists. With just over three remaining until halftime 905 led 51-50.

Brissett with another chance to close the quarter with a bang. A lengthy review followed what looked like a clear foul. He missed the free throw and at the half it was a narrow 905 lead, 59-57 over the Magic. Ennis was up to 13 points to go with his four assists. Vic Law was leading Lakewood with 12 points but on an inefficient 4 for 13 from the field.

Brissett was taking over while the Raptors leading scorer, Justin Anderson was out (personal). He led the first 24 with 18 points along with a team best six rebounds.

Law started the third with a vengeance. A long talk with the referees about the foul called to end the second. Law was now letting his play do the talking, an easy jump shot then a deep three to give the Magic a slight lead, 64-61.

A 7-0 run by the 905 quickly erased that. It was capped off by Devin Robinson following up a missed layup by Ennis and throwing it down hard. Later, Robinson obviously wanted to be on the highlight reel. He threw it off the backboard and slammed it home with authority.

The 905’s offence changed into more cuts with great passes than relying on the pick and roll like it did in the first half. The problem was the defence as the Magic were holding a tight 80-78 lead with two minutes remaining in the third.

A poor close to the quarter extended Lakeland’s lead to 84-80. The Magic had a very balanced attack with five guys in double figures. A lot of that came from their willingness to pass the ball. and it paid off since on 33 made shots they had 29 assists. Hassani Gravett was doing really well running the point of attack with seven assists and shooting 5-of-10 for 12 points. “It’s tough, the guards they’ve got move the ball and are real crafty and you don’t want to help too much because they got good shooters in the corners,” Brissett on the 905’s struggle defending the pick and roll.

The start of the fourth was a different story. It took until 9:04 for the Magic to get their first point. The 905 had multiple turnovers but still were able to grab a 87-86 lead thanks to their defence.

It was very back and forth in the middle of the quarter. Neither team could pull away as with four minutes remaining the Magic held a slight one point lead, 98-97. Lakeland who are fourth in the league in blocks were looking like it with nine, six of which were from Michale Kyser.

Ennis missed back-to-back floaters in the lane. The following offensive possession was a shot clock violation. It capped off what was a very rough shooting night for Ennis (Nine assists) who finished 5 for 17.

The Magic went on to win 112-105. Magette was outstanding with a double-double, 23 points and 13 assists. “I thought we lost as a team, weird thing to figure out but I thought they were at least together on what we were trying to do and we didn’t accomplish it and that means we gotta improve,” Jama Mahlalela’s message after the loss.

Tyler Ennis, 15 points, 9 assists and 6 rebounds. Struggled late but a great job making plays from the pick and roll.

Oshae Brisset, 24 points, 3 assists and 8 rebounds. Was dominant in the first half but had a lack of touches in the second. When asking Brissett on being a two-way player, “I learn a lot from those guys on and off the court and the way that they carry themselves.”

Duane Notice, was a DNP.

Justin Jackson, The only Canadian on the Magic roster was out of the lineup. “I’m pretty much fully recovered but it’s all about baby steps. The Magic staff put together a plan and we’re focused on the best time for me to come back,” Jackson said of missing the game.

Next up, Wednesday versus the Greensboro Swarm at 7:30pm EST. at the Paramount Fine Foods Centre.

Written by Harley Kock. Check out Harley on Twitter.

Photos by Cam Bartlett. Cam is also on Twitter.