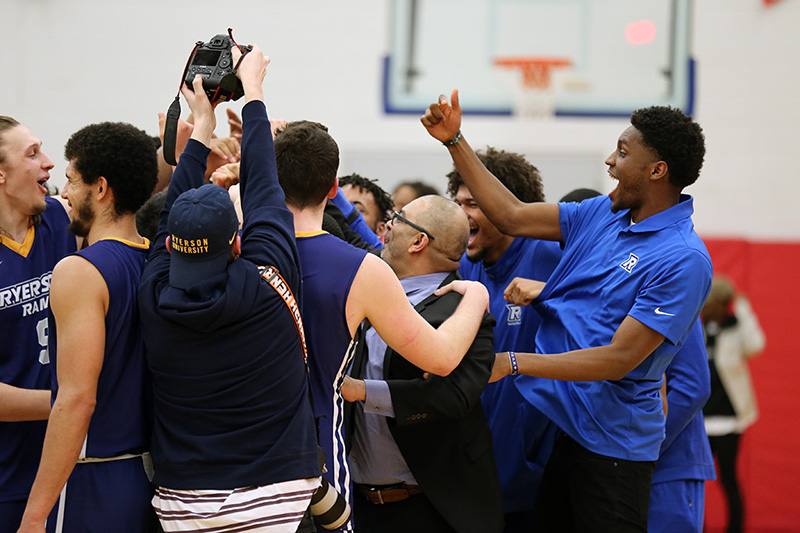 By Teru IkedaMarch 1, 2018No Comments

In one of two OUA semi-final games Wednesday night, the 3rd seed Ryerson Rams defeated the 2nd seed Brock Badgers 69-63 in St. Catherines, booking a trip to the OUA Wilson Cup Championship game as well as the U Sports Final 8 National Championships in Halifax.

The first three quarters told the same story – Ryerson would lead each quarter and Brock would play catch up. In the fourth quarter, Brock twice inched within three points, but a triple by Ryerson’s Filip Vujadinovic iced the game for the visitors.

Manny Diressa led the Rams’ scoring with a quiet 19 points, going 10-11 from the charity stripe. But it was Ryerson’s supporting cast of Vujadinovic (16 points), Myles Charvis (15 points), and Roshane Roberts (7 points) who collectively shined brighter than their star player.

In the second frame, Charvis was a menacing offensive threat off the dribble; including four consecutive drives, opening up options for Ryerson’s offense. He first penetrated the paint and found an open teammate for a field-goal attempt. On the next possession, he dribbled, drove, and scored. On the 3rd possession, he drew contact and hit both free throws. On the fourth consecutive play, he used a Ngom pick and finished a reverse lay-up.  A few minutes later, he finished a strong lay-up and found Jean-Victor Mukama for a wide-open corner three point field-goal attempt.

The third quarter saw little action as both teams registered only 12 points apiece. Vujadinovic finished the third quarter the same way he ended the second by blocking a shot and following up with a made basket. In the game, he converted four points off his two blocks, scored nine points beyond the arc, and made 3 free throws, culminating in 16 points.

In the fourth quarter, a Brock comeback twice seemed within arm’s reach. Early in the final frame, a triple by Badgers’ Johneil Simpson pulled Brock within three points, but Rams senior guard, Roberts, stepped up, hitting a tough layup and then making a 3-ball, widening the gap to eight. When Badgers’ OUA First-Team All-Star forward Elgadi, hit a step-back jumper, Roberts answered back with a deuce, maintaining the Ryerson lead at 60-52.

Unabated, the Badgers kept chipping away. Brock forward, Cassidy Ryan, hit his only deuce of the night after the ball moved excellently into his hands. Badgers’ All-Rookie guard, Kascius Small-Martin, subbed in for Simpson after he fouled out and had a mid-range jumper off an amazing drive-and-dish by Tyler Brown. It was, yet again, a one possession, three-point game with the Badgers trailing 61-58.

With 1:16 left in the fourth quarter, Elgadi coughed up the ball on the biggest possession of the season. Ryerson capitalized by executing a picture perfect play as Diressa drew a double team at the top of the arc, dished it to Roberts who found Vujadinovic for the open corner three. With 55 seconds left, Vujadinovic iced the game, hitting a shining moment triple as he has done so many times in the regular season.

The Ryerson Rams will head to the Carleton Ravens’ Nest on Saturday, March 3rd, seeking to three-peat as OUA champions. To defeat legendary Coach Dave Smart and his Ravens, however, will require zero room for error. In the Wilson Cup Championship Ryerson cannot afford to commit turnovers and have the scoring droughts that plagued them against Brock.

Ryerson will face the best team in the country and whoever claims Ontario holds the keys to winning the national championship. Saskatchewan is the only out-of-province team to win a national title in the last 16 years and Carleton has won 14 of them.