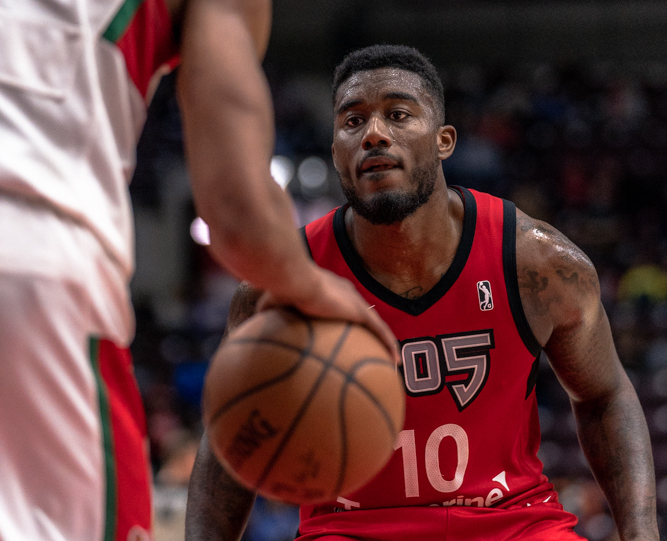 By Berkeley MosesMarch 6, 2019No Comments

(Mississauga, ON) On Saturday afternoon the Raptors 905 were looking to start the month of March in the win column. With Montreal native Chris Boucher in the lineup and the addition of 2016 first round draft pick Wade Baldwin, the 905 put a roster on the floor that now includes four NBA prospects.

Taking on a tenacious Capital City Go-Go the 905 knew they would have their hands full with former Tennessee guard Jordan McRae. The 905 came out of the gate strong with Boucher and Baldwin doing the heavy lifting on the offense, with Derek Cooke and Josh Adams doing the scrappy defensive work. The 905 shot 58% from three in the first quarter hitting 7-12 leading to a 37-23 lead at the end of the period.

Any assemblance of a second quarter run by the Go-Go was quickly shut down by Cooke’s posterizing dunk on Capital City center Darel Poirier with 7:21 left in the frame. Rodney Pryor came in off the bench for the home side and quickly went 3-3 from beyond the arch.

The crowd was in frenzy and at one point it seemed like the 905 couldn’t miss – shooting 67% from the field with 4:52 left to go in the half.  The hosts would continue to sizzle, taking a commanding 79-50 lead into halftime.

Although Toronto native Duane Notice did not heavily contribute on the offensive end, he continued to remain active on both ends of the floor. The 905 guard grabbed six rebounds, many of them to seal stops as the Go-Go were making their second half push. With 9:00 left in the game the shooting percentages had evened out to 46.3% for the Go-Go and 51.3% for the 905.

Capital City pulled closer in the 4th quarter, at one point bringing the game within 12. Go-Go guard McRae was creating havoc for the Raptors interior defense and got to the line 14 times throughout the game. Capital City ended up being their own worst enemy, often stalling their own runs by turning over the ball or challenging the referees, resulting in technical fouls being assigned.

Boucher looks like he’s having a lot of fun on the court these days. I spoke to him briefly after the game and he mentioned, “When you play for the Raptors it’s like playing for Team Canada, it’s great to have the whole country behind you.”

Go-Go guard Pe’shon Howard was ejected from the game with 2:45 to go for using a derogatory term towards an official. The 905 finished the game with the same great energy they started with, pushing through to a 135-119 victory.  When asked about the chippiness of the game Coach Mahlalela responded “I talk to the team a lot about energy, I think we use our energy on ourselves and not on the referees, whichever way the calls are going or whatever is happening the other sideline we worry about what we’re doing and try and use our energy for our own positive good and that was the message today”.

Even though he’s a rookie Head Coach, Mahlalela is wise beyond his years. Having spent some time around the staff in clinics and practices there is always an emphasis that no matter what level of basketball success you achieve, you should always remain a student of the game and be willing to learn and absorb information from the others.  With connections to U Sports from his own playing days, Mahlalela continues to learn and obtain ideas from U Sports and Canadian college coaches, as well as giving many of them the chance to learn and serve on his coaching staff. The 905 will head out west for the week to take on Salt Lake City, Rio Grande Valley and the Austin Spurs.

Wade Baldwin’s 27 points, 6 assists, 5 rebounds lead the Raptors. Derek Cooke Jr. was solid, pouring in 19 points with 16 rebounds. Canadian player of the night, Chris Boucher had 19 points, 8 rebounds and 2 blocks. Jordan McRae of the Go-Go led all scorers with 44 points.