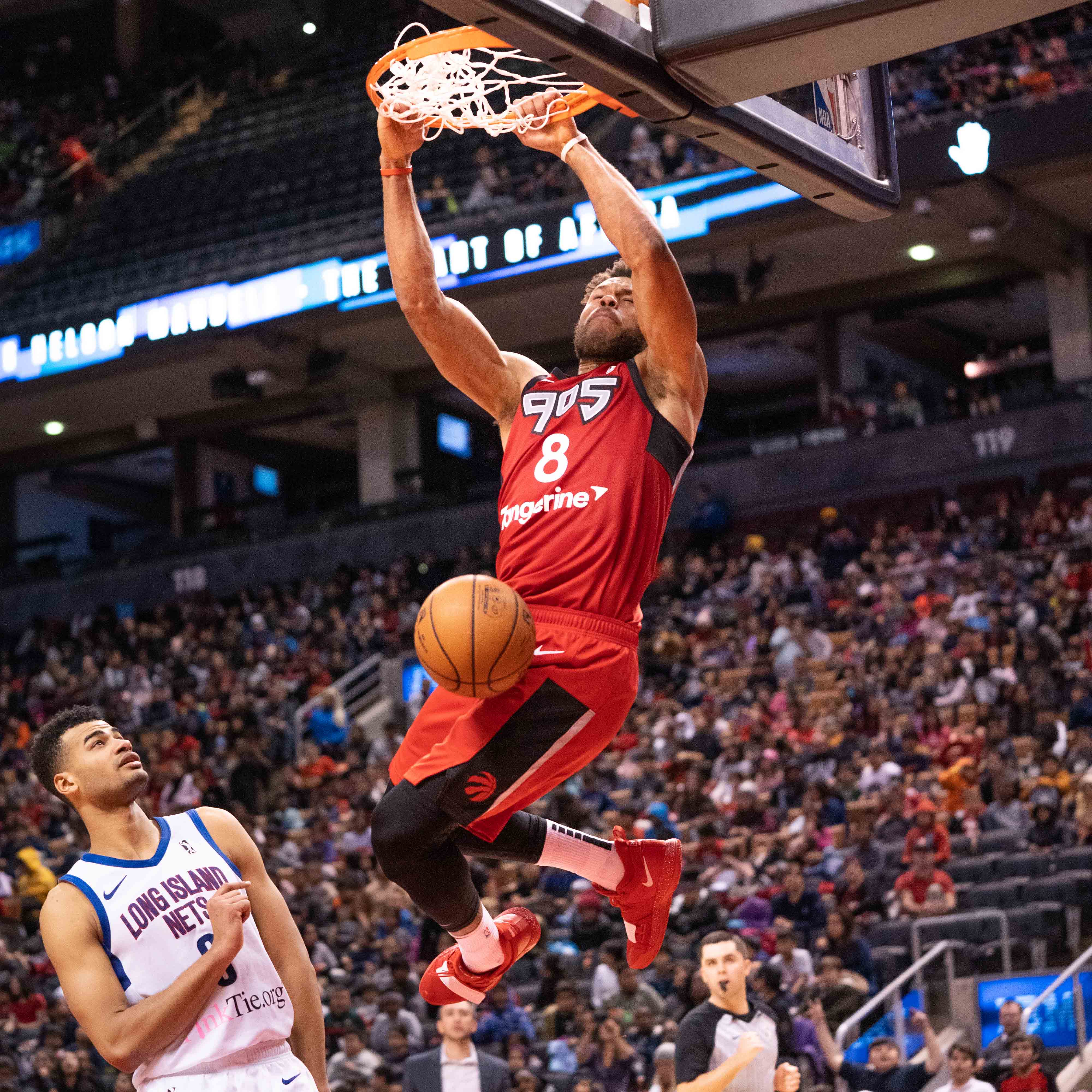 By Kajan ThiruthanikasalamDecember 5, 2019No Comments

One more free throw. That’s what stood in the way between the end of this game and an extra five minutes of basketball between the Long Island Nets and the Raptors 905 at Scotiabank Arena packed with kids for the school day game. The 905’s best offensive option for the game, Justin Anderson, was at the charity stripe as well after getting fouled on a three point attempt, having made two just moments prior to that.

Everything was set for the 905 to steal this game after trailing by as many as 18 points in the third quarter. And then the free throw went, according to Anderson, “left.”

“I felt like every shot was the same but for whatever reason, that one went left,” Anderson said. “The game went left, the shot went left, and it was with my left hand.”

“It feels good and I’m having fun. My teammates are giving me an unbelievable opportunity to go out there and display what I could do,” Anderson said. “The Raptors (905) gave me an opportunity and I want to take advantage of it. I just want to make sure I keep locking in and shoot the ball at a high clip… and make my free throws.”

Along with Anderson, four other players scored in double figures for the 905. They were Tyler Ennis (17), Dewan Hernandez and Jawun Evans (12 apiece), as well as Shamorie Ponds (10).

Ennis had a game-high 14 assists while Evans finished with a triple double, dishing out 10 dimes and grabbing a game high 10 rebounds. Both players headlined a 905 attack that dished out 33 assists on 44 made field goals.

“We (Me and Jawun) can both kind of exploit the matchups and it’s hard to put two people (defenders) out there to guard us,” Ennis said of the facilitating shown from him and Evans. “They didn’t really have a premier shot blocker out there so we were able to get in (the paint) and a bunch of guys were making shots as well.”

CJ Massinburg had a team-high 10 assists for Long Island, who made 18 triples on 43.1% shooting despite committing 23 turnovers. The visitors, overall, shot 50%.

“The defensive end is something we have to be consistent at,” Ennis pointed out. “It’s not the first time a team’s come out and hit a bunch of threes on us.”

Anderson started off red hot in the first quarter, scoring 14 in the frame on the strength of four made triples for the 905. But McMurray (13) and Kurucs (10) scored in double figures in the quarter for Long Island, who hit eight triples to take a 39-28 lead after one.

Cannady and Hernandez each had six in the second quarter for the Nets and 905, respectively, as the frame provided a slower pace compared to the first quarter. A triple from C.J. Williams pushed Long Island’s lead to 18 but the 905 used a 6-0 run to cut the lead to a dozen (63-51) heading into intermission.

Both teams played even in the third quarter at 27 apiece as Ellenson led Long Island with nine with his inside presence while Matt Morgan was a spark plug for the 905, pacing them with seven. However, Morgan left the game early in the fourth quarter after a hard fall and did not return.

“He (Morgan) had a really nice sequence there that turned the momentum in our favour,” 905 head coach Jama Mahlalela said of a sequence out of the timeout in which Morgan had a pair of layups along with a steal. “His ability to shoot the ball is tremendous for us. When he’s playing well, we’re obviously a much better team.”

After a fadeaway from Ellenson extended the Nets’ lead to 99-88, the 905 responded with 11 straight points to tie the game on a pair of Anderson free throws with 5:35 left. The defense had life during that run in which the 905 went small with Oshae Brissett at the five.

“I think (it was) our energy,” Ennis said of the defense in the fourth. “We seem to lock in at the end of games, flying around and switching.

“We’ve played small a couple of times before… in this case because they shoot the three so well.”

Long Island, however, responded and were up 10 after a pair of free throws from Cannady with 1:08 to go.

Cannady then was fouled with 0.9 left and nailed both free throws as the 905 advanced the ball with one last chance to tie the game. The ball went to Anderson, who fired up a three point attempt that was well short… but incredibly got fouled by Ellenson in the process, firing up the kids in the arena.

However, Anderson couldn’t make all three as he fell to the floor in disbelief, leaving himself, the team, and the fans at Scotiabank Arena forlorn. The 905 now head out onto the road for three games, starting with Saturday’s matchup against the Fort Wayne Mad Ants.

“It’s a testament (to our team) that we kept on fighting. The ball wasn’t falling and it felt like it was going their way all the time. Loose balls were going their way and the whole momentum was theirs all game,” Mahlalela said of how the game transpired. “But we kept on keeping it close. We made a few shots and got some stops eventually.”

“It was a heck of a fourth quarter. That was fun for the kids, that’s for sure.”

Written by Kajan Thiruthanikasalam. Check out Kajan on Twitter