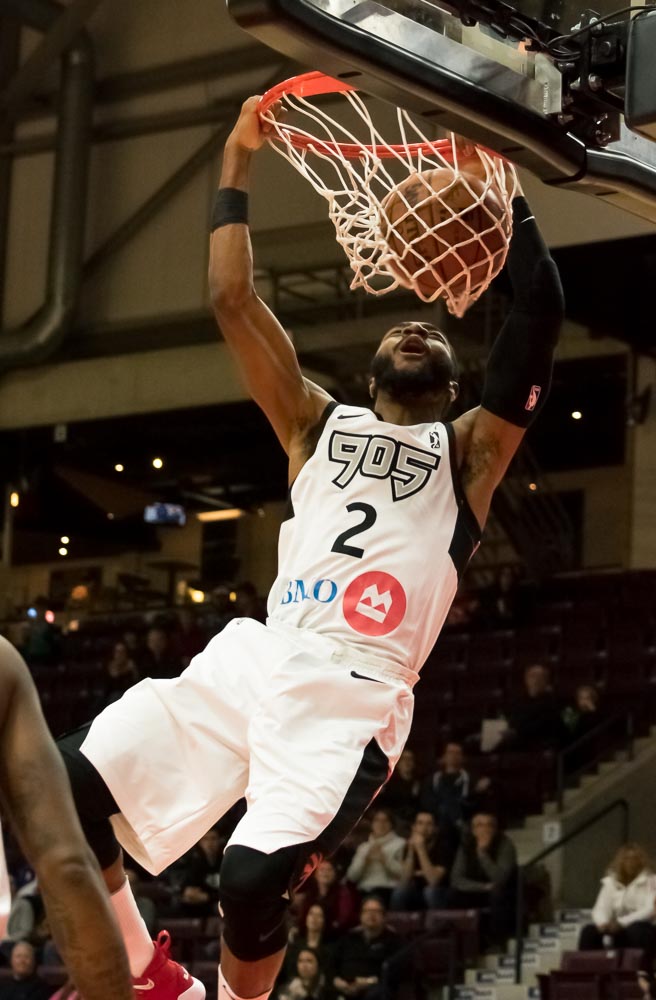 By Jaspreet GrewalJanuary 3, 2018No Comments

After beginning the month in a bit of a rut, the Raptors 905 have reemerged as a team on the rise, claiming victories in eight of its last nine contests and winning seven in a row, including Tuesday night’s 91-84 nail biter over the visiting Lakeland Magic.

Davion Berry led all scorers with 19 points, seven coming in the final frame. Not far behind him in the scoring column was backcourt mate Lorenzo Brown, who poured in 16 points to go along with seven dimes while also going perfect (4-4 3PT) from deep.

For Lakeland, TJ Price recorded a team-high 17 points, Jamel Artis added 15, and Adreian Payne chipped in with a double-double, posting 13 points and 11 rebounds in the loss.

Both teams entered tonight’s contest owning a top-5 defence – with the 905 sitting atop the league at opponents points per game (98.1) – and the ugly shooting percentages only substantiated both teams’ ability to defend well.

Lakeland came out with a sense of urgency from opening tip, asserting a paint presence with Payne and trying to take advantage of the sole big (Kennedy Meeks) on the floor for the 905. Behind seven quick points for Artis, the Magic were able to jump to the 28-23 advantage after one quarter.

It was a struggle for both teams to generate easy or high-percentage shot opportunities all night – and when they did, they often missed the mark.

Though the 905 were able to hold the Magic to 18 points in the second, things weren’t going so smoothly on the other end – resulting in what looked like a carbuncle on the half-time box score where the 905 shot 35.1 per cent, while Lakeland was marginally better at 37.8 per cent. Despite the unpleasant numbers, the 905 only found themselves down 46-43 at the break.

The third quarter turned out to be crucial for the 905, where they shot 50 per cent, racked up eight trips at the charity stripe, and outscored Lakeland 26-20 by the end of the quarter – all while opening the frame on a 15-4 run.

Key in the scoring charge were both Brown and Aaron Best, the latter of who recorded 10 points on the night, including six in the third on a solid serving of straight-line drives to the rim.

The 905 were able to sneak the 69-65 lead into the final quarter of regulation.

Lakeland were hit hard for a good part of the fourth, at one point trailing 82-73, but the visitors responded in a big way, ultimately trimming the deficit to two, 84-82, with 2:15 remaining in the game and regaining its once seemingly unbending momentum.

Struggling to find the bottom of the net all game, Bruno Caboclo eventually connected on his only triple of the game, helping extend the lead to five, 87-82, before Meeks would score inside to help cap off a 7-2 run for the 905.

Despite shooting poorly all-game long, Caboclo showed up defensively, recording key blocks and steals when the 905 needed it most and using his length to pester defenders, especially inside. He finished with 14 points (4-14 FG/1-10 3PT), seven rebounds and two blocks in 29 minutes.

With Tuesday’s win over the Lakeland Magic, the 905 knot things up with division rivals Maine Red Claws, both of whom own a 12-10 record.