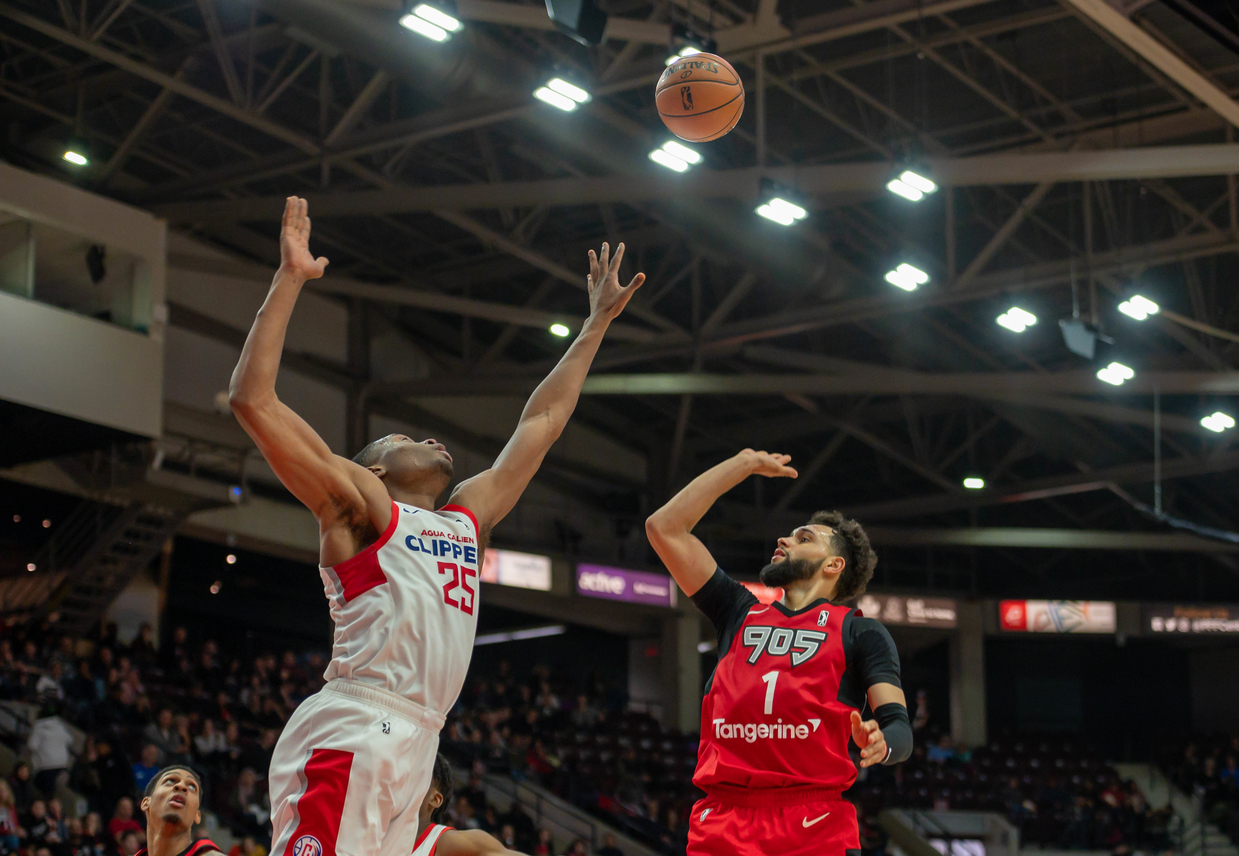 (Mississauga ,On) Coming off a win to end 2019 against the Greensboro Storm, the Raptors 905 opened the new year with a home game against the Agua Caliente Clippers at the Paramount Fine Foods Centre.

The Clippers (Agua Caliente) have two prominent Canadian players on the roster in Mfiondu Kabengele  (Burlington, On.) and Xavier Rathan-Mayes (Scarborough, On.) who scored 18 and 25 points respectively in the team’s previous win against the Memphis.

The game opened up with a fast pace with Raptors 905 forward Justin Anderson scoring 5 of the Raptors first 7 points. He would go on to finish the frame with 12 points and 6 rebounds.

The Clippers stretched the Raptors out with six first quarter three pointers and showed versatility with a strong inside game from big man Kabengele and would close out the quarter with a one point lead. The Raptors opened the second quarter with a scoring drought, not scoring a single field goal for the first 3 minutes of the quarter and only had four total second quarter points with 5:40 to go in the half. The defence did improve in the second quarter however and the 905 held Agua Caliente to one of eleven from the 3 point line and 39% overall in the quarter. The Raptors were unable to capitalize on their defence unfortunately only shooting 33% in the second.

Justin Anderson kept the home crowd in the game with a highlight worthy dunk and Paul Watson contributed with 7 second quarter points to keep the Raptors 905 in the game through halftime trailing 49-47 at the break.

Mississauga native Oshae Brissett was in the lineup for the 905 for this game, however he appeared somewhat fatigued as he went o-for-8 from the field (Four points) on the night.

Brissett (two-way player), has been on a whirlwind lately, suiting up for both the Raptors 905 and the Raptors over the last week plus, “Yeah it’s crazy. You never know when you get called up or have to go back down. Like I said, it’s wild. Right now I gotta hop on a flight and meet them in Miami.”

But Brissett isn’t complaining, “This is what I wanted, coming in I wanted to play so just glad I had the opportunity.”

The Raptors lead the rebounding battle throughout the first half and ended up with more boards overall in the game (49-42), but were plagued by turnovers (18) and missed shots (42.9%fg). The Canadian Kabengele, who controlled things inside the paint, scoring 11 points in the quarter, effortlessly dominated the third quarter. The Clippers would go onto shoot 55% overall in the quarter stretching their lead to double digits by the end of the third (78-68).

Kabengele, the nephew of former NBA big man Dikembe Mutombo, was excited to be back home and it showed, “Yeah I mean I felt a little anxious because I’m back home. But once I kinda settled in and the game kind of came towards me. I focused on rebounding and after that everything just connected.”

The fourth quarter was another tough one for the Raptors as the Clippers extended their lead to 20 points and easily swung the momentum of the game in their favour. This game was ultimately lost on turnovers and missed opportunities as mentioned above. There were some sparks from Brampton native Tyler Ennis (14 points eight assists) but it would prove not enough as the Clippers cruised to a 110-93 victory.

Rathan-Mayes, said his team had one thing in mind, “Stops. We were able to get a lot of stops. Get out in transition. That was a big thing for us and if we can get stops we’ll be alright.

The Raptors 905 (currently 7-11 on the season) look to work their way back to the 500 mark as they go on the road to face the Grand Rapids Drive this Saturday. (7pm est.)

Written by Berkeley Moses. Check out Berkeley on Instagram