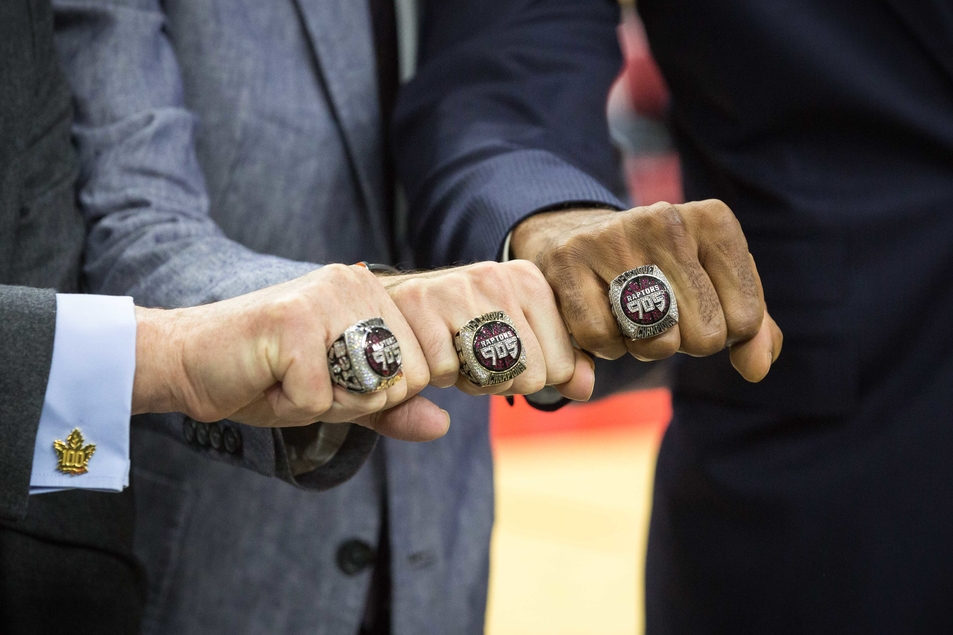 Raptors 905 give out rings, raise banner and win in home opener

By Jaspreet GrewalNovember 11, 2017No Comments

Home » On Point Blog » Raptors 905 give out rings, raise banner and win in home opener

The Raptors 905 celebrated their 2017 championship in style Wednesday evening, distributing replica D-League Championship rings to fans in attendance and recognizing head coach Jerry Stackhouse for his Coach of the Year award from last season. The Hershey Centre was expectedly raucous for the team’s home opener, a positive sign for the relatively new G-League franchise.

It wasn’t pretty, and the numbers were telling:

38.9 per cent from the floor, 33.3 per cent from three and a shocking – but not really – 27 turnovers, leading to 24 Long Island points and equaling more than a third of the total put up by the Nets.

But despite the troubles offensively, the unusual amount of miscues, and the lack of chemistry and cohesion – an inevitable result of bringing in an entirely new roster outside of the two returnees in Bruno Caboclo and Negus Webster-Chan – the 905 muscled their way through the assignee-less Long Island Nets Wednesday evening, coming away with the 91-65 win and improving to 1-1 on the season.

“That’s probably one of the not-so-bright spots of the night,” said head coach Jerry Stackhouse of the team’s absurd number of turnovers, perhaps a result of losing floor generals John Jordan and Axel Toupane this offseason.

“A lot of it was just our own mistakes with the ball. That’s where we have to keep pressing the issue and making sure that we’re just solid,” he said. “Everybody wants the highlights but we’ve just got to find a way to be solid and the highlights will take care of themselves.”

The offence was disjointed – understandable considering the novelty of the roster and the lack of time together to mesh and gel – but the effort, intensity, and will to dig in defensively are all echoes of a Stackhouse team.

The 905 limited the Nets to a remarkable 26.7 per cent from the floor and 11.1 per cent (3-27 from deep) while also causing havoc in passing lanes (Richard Amardi shot the gap quite often against some lazy, stagnant passing by Long Island).

“We’re not going to hold teams to 50 or 60 points every night,” said Stackhouse. “I think this is a good sign for our guys, to let them know that when we do the things that we supposed to do defensively then we’re capable of having nights like this even when we don’t play offence well.”

The team is visibly smaller than last year, something that will surely cause issues against bigger teams. But they’ve added foot speed and length, improving their ability to close out on shooters and switch on screens. It’s the new way of going about things in the NBA, and it’s quickly trickling down into the G-League as well.

One of the lone bright spots offensively was the much maligned and perhaps enigmatic Caboclo. It’s fair to question the mental psyche of the 6-foot-9 forward – he can shoot, but lacks consistency; he can defend, but lacks the drive- however, you would be wrong to deny the physical stature, gangly arms, and just sheer versatility of the fourth-year player and the sort of intangibles he brings to the 905 with his presence alone.

On Wednesday, Stackhouse, prior to tip off, alluded to possibly plugging Caboclo at the five and perhaps staggering his minutes in hopes of unearthing some possible on-court combinations. But by no means did anyone, at least me, foresee the Brazilian starting at Center and subsequently anchoring the 905 defence.

In just under 28 minutes, Caboclo recorded 17 points, six rebounds and was perfect from beyond the arc (3-3), all while sporting a plus-minus of 18.

“We’re still high on Bruno. We think he still has some unbelievable potential,” said Stackhouse. “He’s just gotta try to find a way to tap into it.

“I like [him playing at Center] because it’s a matchup problem for [other teams]. Our only real Center on the team right now is Andre Washington. Having Bruno out there at the five I think we can cause some matchup problems. With his length we don’t worry about him really on the defensive end.”

Caboclo is nearing the back nine of his rookie contract and surely the pressure to perform is mounting exponentially.

If all goes well, the hope is that he’ll eventually carve himself a spot with parent club Toronto Raptors, but much of that is contingent on his success in the G-League.

Take a look at the roster sheet and you might recognize some familiar Canadian names plotted down on the paper. From new additions like Kaza Keane (Carleton), Aaron Best (Ryerson), and Amardi (NBL Canada by way of Oregon), to returning players like Webster-Chan and Caboclo (he’s reserved the right be considered an honourary Canadian), the 905 managed to pluck some talent from their very own backyard.

Best is an interesting talent. He’s quick, deceptively strong, and has the ability to spread the floor of any offence. He was the go-to scorer at Ryerson, but he’ll have to learn to adapt to the point guard position if he’s to carve out a role in the G-League. That’s not to say he can’t be successful scoring the ball, he can, but scoring guards are a dime-a-dozen in the G-League, so he’ll have to separate himself from the pack.

Amardi will always be a great locker room presence, but that’s not why the 905 brought him in. The 6-foot-9 forward brings a depth of versatility and athleticism to an already long and athletic group of guys.

“Don’t start that,” said a noticeably amused Stackhouse when asked about Amardi and his ability to play all five positions. “He’s a four. Make sure he hears that. He’s a four, he doesn’t play all positions.

“But it’s good to have Richard, he’s a great personality on our team, first off. He’s the life of the team, but I just think he’s skilled. He’s athletic, can play above the rim, can offensive rebound, can guard different positions for us,” said Stackhouse. “Really happy to have him.”

Stack’s analysis was fairly precise. Amardi’s a Swiss army knife, willing and capable of taking on all sorts of challenges. The former Oregon Duck logged just over 22 minutes and scored eight points to go along with nine rebounds, but his highlight of the night – a transition steal which led to a thunderous jam – was a microcosm of his athletic ability and, unerringly, why the front office is so intrigued by him.

Keane will take some time to adjust to the G-League. Having played at the NCAA and U Sports levels, he’s experienced the different layers and stages of basketball competition. From all accounts, he’s extremely coachable and malleable and was one of the many important cogs to coach Dave Smart’s offence at Carleton.

Keane didn’t necessarily play his best offensive game on Wednesday – defensively, he was a nuisance for Nets’ guards to deal with, though – but we’ll just chalk that up to nerves and adjusting to a new court, new teammates and a new, heightened level of competition.

Keane will be fine. Once his jump shot begins falling the rest of his game will eventually open up.

According to Blake Murphy of Raptors Republic, Webster-Chan is still nursing an IT band injury, causing him to miss his second consecutive game.

No such thing as stability in the G-League

It’s especially prevalent in developmental leagues where players are constantly on the move, searching for better opportunities and using the minor-league system as a springboard into a more competitive and lucrative situation.

The NBA G-league, recently rebranding its name to align with its major sponsor, Gatorade, is a prime example of the constant flux and movement of team personnel in pro sports. Just last season former Raptors 905 stars Toupane and Tavares were both called up to the NBA to finish out the remainder of the 2016-17 season.

It’s the reality of the G-league and essentially the crux of its existence.

The focus of every team in the league is to develop and nurture its players, not win games – though that’s invariably a bonus.