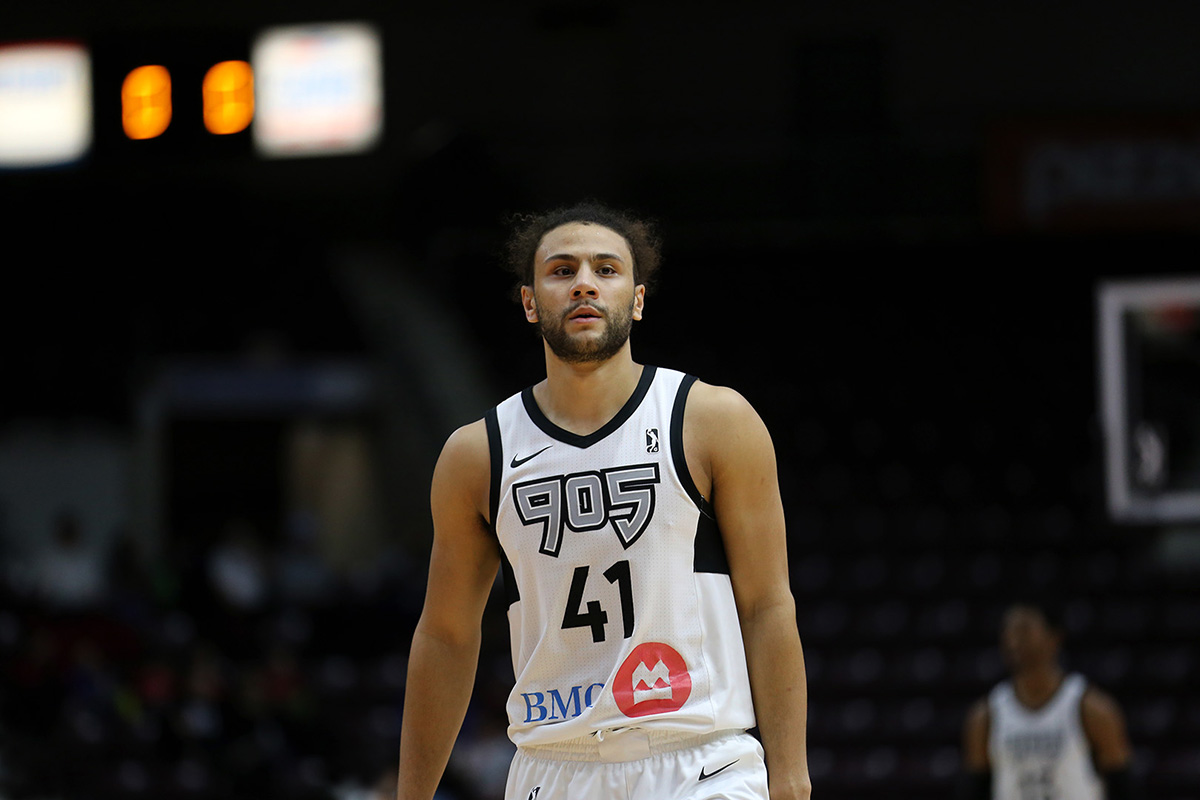 (Mississauga, ON) The Raptors 905 continued their winning ways taking down Canadian Anthony Bennett and the Maine Red Claws 102-94 at the Hershey Centre in a game that was tightly contested throughout.

The hosts led by one at the half and by 2 after 3 quarters but were decidedly better than the Red Claws in the fourth as they held on to the 8-point victory.

The 905’s Alfonzo McKinnie was stellar in this one notching a team-high 22 points to go with 10 rebounds on 8-15 shooting. The Toronto Raptors assignee hit three trifectas and also had a block in the game. Shevon Thompson scored 14, while Canucks Aaron Best and Kaza Keane also played well notching 13 points and 6 rebounds and 10 points and 8 assists respectively in the winning effort.

McKinnie knows his hard work will help the team and also prepare him for an eventual call up to the Raptors, “I’ve been working on my game like day in and day out. It’s just something I have to do at this level for whenever I do get called up for the Raptors. I never know so it’s something I got programmed in my mind. “

The 905 are now 8-2 in their last 10 and have won two in a row with one more game before the All-Star Break taking place in Los Angeles, CA.

The first quarter was a back and forth affair as both teams struggled to get much separation from the other with the largest lead for the Red Claws was six points and five points for the 905.

The second quarter was much of the same as Aaron Best and Malcolm Miller contributed solid first half with 10 points and eight points respectively.

The game marked the first for the newly acquired guard Malachi Richardson, who came over in the Bruno Caboclo trade. Richardson started and finished with 8 points and three rebounds in just over 18 and a half minutes. Richardson had a world wind week and took a little bit to get going in the game, “Man absolutely. It took me about eight shots. It’s cool. Wish I would have played a little better. It happens. A little rusty.”

Head Coach Jerry Stackhouse was happy with Richardson’s performance in his first on a new squad, “We didn’t try to overload him, just give him a few things that he can do out there. Thought he did a good job at the end of the first half.”

The closely contested affair continued into the third with 14 lead changes up until that point. McKinnie started to sizzle in the third notching 8 points on some stellar plays to lead the team with 13 points going into the final frame.

McKinnie continued to produce buckets in the final frame, notching 9 points to finish as the team’s highest scorer (22pts). The 905 had 5 players score in double figures and dominated in the paint in the game with a 50-22 advantage in close in baskets.

Former NBA #1 overall pick Bennett, didn’t shoot a great percentage, going 8-for-22 in the game but still poured in 23 points (six threes) to go with 7 rebounds for the Red Claws. It was interesting to see Bennett mostly hang outside the arc (15 attempts) and he didn’t post up or drive much in the game.

Kadeem Allen led the team with a game-high 24 points to go with 8 assists and 5 rebounds.

Overall, not the prettiest of games for the 905, but they’ll take the victory nonetheless as they improve to 23-14 on the season, as they hold on to second place in the Atlantic Division behind Canadian Xavier Rathan-Mayes and the Westchester Knicks.

Raptors guard and Canadian Best (Ryerson Rams) has been invited to participate in the NBA G League dunk contest and has shown some impressive dunks in games this season. But it’s in the warm-ups where the 6’4” guard really shines as he’s been featured in the team’s social media posts throughout the season.

When asked who’s the better dunker Stackhouse had this to say, “Aaron is pretty good man. He has a chance to go out to L.A. and represent well. Good for him man. This is a kid who works his butt off. Last game and this game he stepped up and made a huge shot for us and it’s a tribute to his work and effort to try to get better through the course of the season.”

Two-way contract player Lorenzo Brown played only 4:44 after suffering a sprained ankle in the first quarter. He had started well going 2-2 with 4 points before the injury

Canadian Keane came on and played a solid second half with a near double-double (10pts 8asts) and was a team-high plus-16 in the game.