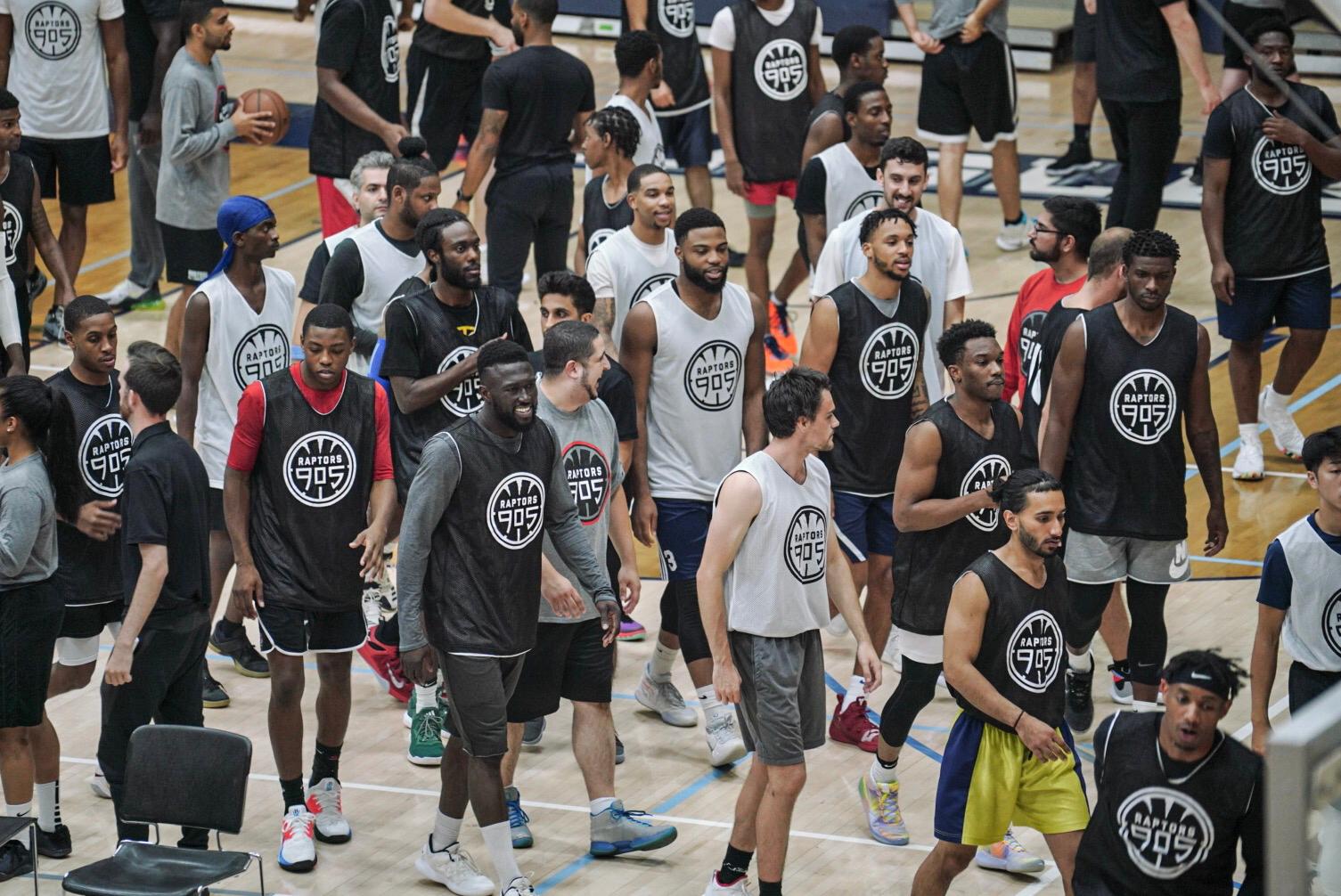 By Teru IkedaSeptember 9, 2019No Comments

(Mississauga, ON) 98 tryout hopefuls competed for one of four coveted spots on the 2019 NBA Champions’ G League affiliate’s training camp roster. Yes, that’s a training camp roster, meaning there are no guarantees of making the final Raptors 905 roster. The selection process is unforgiving; the player must make the open tryouts, make it past training camp and must be chosen on the finalized roster, all for the possibility of making a $35,000 base salary.

“This is the largest turnout we’ve had in the five years of the (Raptors 905) program,” said General Manager Chad Sanders. “Part of that is due to the success of the Raptors, and buzz of basketball in the city and the country.”

The majority of tryout hopefuls were looking for a once-in-a-lifetime opportunity to play under the 905’s coaching staff — even if just for a day. For a select few, cracking a 905 roster spot can be a career-changing experience. Playing in the G League instantly adds to a player’s credibility, increasing his marketability amongst top-level European and/or Asian professional leagues.

Xavier Moon, nephew of former Toronto Raptor Jamario Moon, paid for his own flight and accommodation to try out at the University of Toronto at Mississauga (UTM) this past Saturday. He is off to L.A. next weekend, then Detroit and New Orleans to continue workouts at various camps. After graduating from Morehead State in 2017, his career has spanned three countries: France, United States and Canada.

“If I make it to The League (NBA) then, I’d be happy,” said Moon about his lofty ambitions. “Just making sure that I keep working on what I need to work on and get there eventually.”

FACES IN THE CROWD

Gilbert Gyamfi spent the past season playing in France’s NM-3 and played for the Niagara River Lions of the brand new CEBL this past summer. Darlington Osazuwa had a brief stint with the London Lightning (NBL Canada) last season and recently played in the OVO Basketball event. Kenny Ejim took his talents to Spain’s LEB Silver and recently returned from China, having competed in the King of Kings (KOK) tournament in China with Team On Point. After three years away from home, Jasonn Hannibal, who played for Hong Kong Eastern, returned to Mississauga to tryout for his hometown team.

All are competing for a 905 training camp roster spot and are looking to build their professional basketball resumes.

“(People) see what’s going on here. They see the process of our 905 program and players that go from the 905 to the NBA,” said Sanders. “I think they want to be a part of that. And I think that’s part of our appeal.”

In 2016, Negus Webster-Chan, recent CEBL champion with the Saskatchewan Rattlers, joined the 905 as a walk-on. Coached under former head coach Jerry Stackhouse, Webster-Chan won a G League championship along with Fred VanVleet and Pascal Siakam. In 2017, Kaza Kajami-Keane and Richard Amardi attained a 905 roster spot through open tryouts. Keane is currently on Team Canada’s FIBA World Cup roster and Amardi — after having a coming-of-age summer in 2017, dominating the Crown League and cracking Team Canada’s FIBA America roster — is currently playing professionally for Laski Lucile in Bulgaria.

The Toronto Raptors and the Raptors 905 have always found diamonds in the rough and polished them. Expect the organization to continue finding more.

Written by Teri Ikeda. Check out Ikeda on Twitter

Photos courtesy of Jeremy Zheng. Check out Jeremy on Instagram