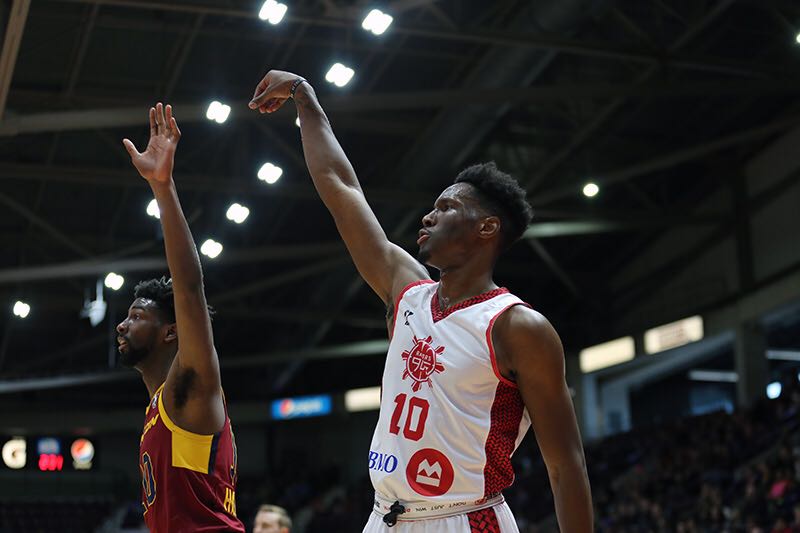 (Mississauga, On) Tensions flared midway through the fourth quarter when Shevon Thompson and Grant Jerrett got into each other’s faces and earned double technical fouls. However, it was this much needed energy and the Raptors 905 prolific three-point shooting down the stretch that brought the crowd back into the game and ignited the home team to the finish line at the Hershey Centre.

The Raptors 905, who had not seen game action in a week, were trailing for most of the game, but rallied and defeated the Canton Charge 106-97 on the second annual Filipino Heritage Game. They now have a 27-17 record and sit just one game behind the Westchester Knicks for first place in the division.

Lorenzo Brown, who returned after missing the last six games with an ankle injury, did not appear to lose a step. He led the Raptors 905 with a team-high of 34 minutes and also had 30 points, seven rebounds and five assists.

“I felt good, ankle isn’t 100% but I’ll deal with it right now,” said Brown while soaking his ankle in an ice tub.

This was the first time that the 905 flexed its war chest of depth by suiting up all three assignment players (Nigel Hayes, Alfonzo McKinnie, Malachi Richardson) and both two-ways (Brown, Malcolm Miller).

The Raptors 905 have had success moving the ball and had recorded over 20 assists in the last seven games. This game was no different as they were particularly good at making on-time and on-point passes to the drift man in the corner off of dribble drives. They would finish the game with 25 dimes.

“It’s pretty easy,” explained Brown who made many plays late in the fourth quarter. “Once someone drives, we have a hammer set on the opposite side of the court. That pass is pretty much right there most of the time.”

“We play the best lineups that will help us win games,” Raptors 905 head coach Jerry Stackhouse said referring to the team’s depth and next man up philosophy.

The Raptors 905 also hosted Durham Rising Suns, a non-profit basketball organization participating at both recreational and competitive levels for a friendly game on the Hershey Centre court prior to tip-off as part of the Filipino Heritage Night festivities. Additionally, the team unveiled special jerseys for the occasion in partnership with RISE. This was a remarkable afternoon in which the Hershey Centre was fairly packed with screaming fans.

“Just to bring a different community in and for us to give a crowd a good energy, we love to have everybody come on out and support us,” said Brown.

Shevon Thompson echoed a similar sentiment. “The fans were awesome. I [could] hear them. They kind of gave me a boost. [When] I can feel that energy with the fans here, I got to go hard.”

Following the game, the Raptors 905 and Let’s Get Together! hosted Aaron Best, Kajami-Keane, Kennedy Meeks, and Thompson to speak about growth mindset among other topics to children and parents in attendance. The panel discussion included many teachable moments and honest stories as players shared about the sacrifices they had to make and keys to achieving their goals.

Next game for the Raptors 905 is Tuesday, March 13 vs. Greensboro Swarm.