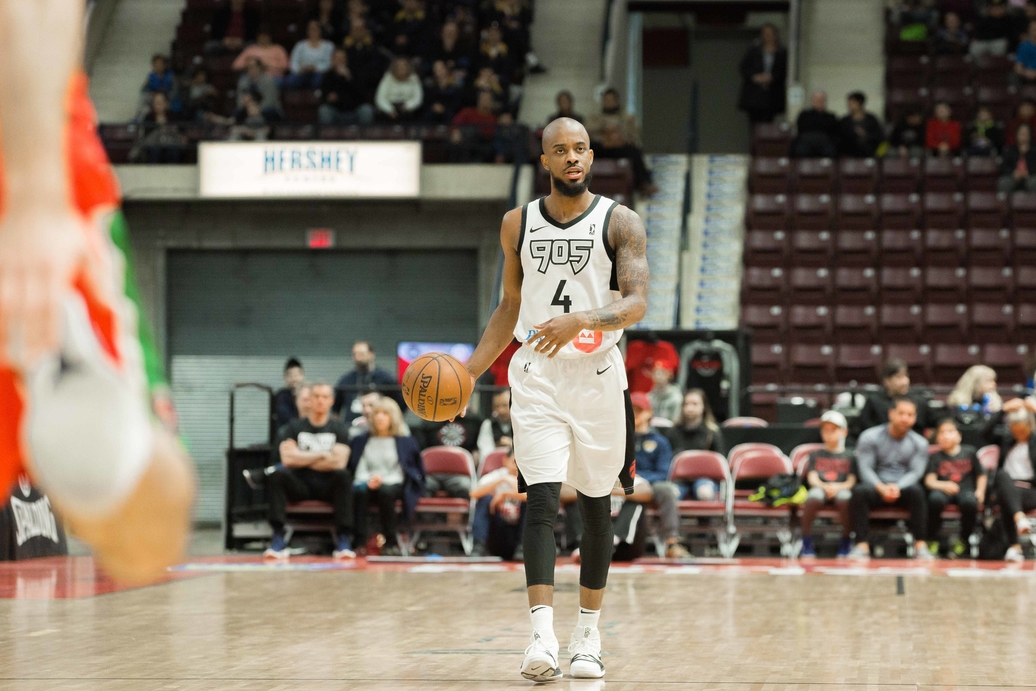 (Mississauga, On) The timing of Lorenzo Brown’s pass was on point. Davion Berry had his feet set and pump faked his defender for a clear view of the basket. The ball soared from the left-hand corner out of his hands as all eyes at the Hershey Centre locked onto the trajectory of its flight.

Eight seconds and one defensive stop later; the Raptors 905 concluded a prevailing comeback in its regular season finale.

“The final possession was just either get [Lorenzo] downhill and let him do what he [does] or look for me in the corner. He found me late and as a shooter, you got to stay ready,” Berry told Raptors 905 sideline reporter Akil Augustine.

Fresh off a four-game west coast road trip, the Raptors 905 overcame the Maine Red Claws 87-86 in a thrilling Saturday afternoon matinee. They end the 2017-18 regular season with a 31-19 record and enter the playoffs as the fourth seed in the Eastern Conference.
“He’s real difficult to read”, said Raptors 905 head coach Jerry Stackhouse referring to Berry. You look at his last five games, he’s probably shooting about 17% from three but at the end of the day, there’s nobody I’m calling a three for other than DB because I know he has a knack of making big shots. He wants to step up and make big shots for the team.”

The Raptors 905 were also aided by Brown’s 24 points, eight rebounds and seven assists. Two-way player Malcolm Miller also chipped in with 21 points and six rebounds and made key three-pointers (5/10 3PT) to shift the momentum for the 905 in the second half.
After trailing 50-43 at halftime, the Raptors 905 slowed down scoring guard Trey Davis by eliminating the Red Claws early offence and preceded to dictate the pace of the game.

They got to the charity stripe 27 times and converted 22 free throws, which provided an antidote to a poor team shooting performance from the field (34.9%).

905 big man Kennedy Meeks impacted the game with eight points and 13 rebounds (six offensive). He has been a consistent presence down low and brings an easy-going swagger to the locker room.

Meeks spoke with On Point prior to the game and touched on a variety of topics. A couple weeks ago, he was involved in a panel discussion on growth mindset and used it as an opportunity to inspire youth.

“More smiles, more positivity is definitely what we need in our country today so being a role model is something important to me and something I strive for.”

On the road and on off-days, the squad has also developed chemistry via team-bonding activities.
“We go bowling, we go to the movies, and we play video games together. We do pretty much anything a college team would do,” said Meeks. “I think that’s definitely what’s good about us is that we’re definitely closer than other teams in this league.”

Finally, the Raptors 905 used today’s game more so as a test drive for the playoffs. 11 players all saw minutes as early as the first quarter and different lineups were used.

“We got to have a playoff mindset, so I think today is the first step of getting ready for the playoffs,” Meeks said. “We got to read the coverages, we got to know the plays, the other team’s plays, and just be ready for all [of] our effort to be better for Wednesday.”