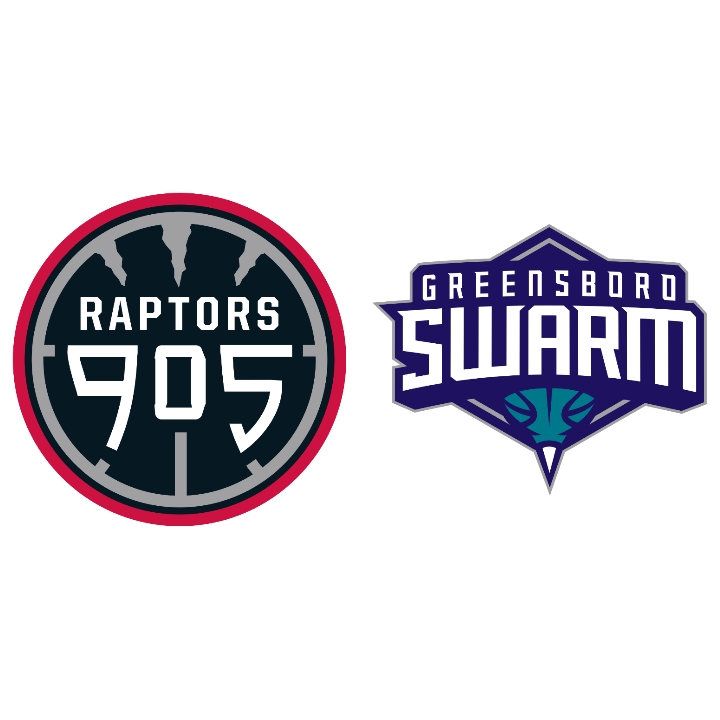 By Connor LamontFebruary 27, 2021No Comments

(Orlando,FL) The Raptors 905 defeated the Charlotte Hornets’ affiliate the Greensboro Swarm 126-117 Friday night in the G League bubble for their third straight win.

Alize Johnson had a monster night for the 905 with 25 points and 14 rebounds and Nik Stauskas shot 7-11 from the three point line to finish with 27 points.

Donta Hall, fresh off signing a 10-day contract with the Toronto Raptors, wasted no time in making an immediate impact with his new team. The former G League Ignite player was assigned to the 905 Friday and did not disappoint. His first few possessions included a hard- fought rebound that he kicked out to Stauskas for a three and scored his first points as a Raptor with a huge dunk. Hall finished with 18 points in his debut and the chemistry with his teammates was noticeable.

“He’s new to our program but he understands our principles, setting screens and rolling to the basket and just knowing his role. Not doing too much and just being such a force defensively,” said head coach Patrick Mutombo post-game.

After a sluggish first quarter, the 905 emerged as the better team in the second. Johnson and Hall dominated the Swarm in the paint and neutralized Greenboro’s star 7-foot Center, Nick Richards. They outscored the Swarm 62-32 in the post for the game which compensated for their woeful first half shooting percentage from three. The great energy from Hall and Johnson on both sides of the court gave the 905 the lead going into halftime.

Despite having a 16 point lead at one point in the third quarter, defensive lapses let the Swarm back into the game. Grant Riller and Kobi Simmons were a nuisance for the Raptors to guard all night and finished with 28 and 21 points respectively. However, the 905 found their three point shooting stroke at the end of the third, including a couple big threes from Stauskas. The 905 took a 13 point lead into the fourth quarter.

“I was getting open looks,” commented Stauskas about his strong shooting from beyond the arc. “Anytime I feel myself getting into one of those zones I just try to be more aggressive.”

Stauskas continued to shoot the ball well in the fourth quarter to help the Raptors pull away for good and improve to 6-1 in their last seven games.

Hall was not the only player to make his debut with the 905 Friday night. Jarron Cumberland was acquired from the Rio Grande Valley Vipers in exchange for Dewan Hernandez, the 59th overall pick of the Raptors in 2019. Cumberland was the 12th overall pick of the Vipers in the 2021 G League draft and averaged 13.4 points with the Cincinnati Bearcats in College during his four seasons there. Cumberland did not play against Greensboro.

The 905 said goodbye to Hernandez, who averaged 10.7 points with the team and certainly was a player the coaching staff valued. “I think it was just the right thing to do to help him, said coach Mutumbo, “ I wish him luck and I really hope that things work out for him because he’s a good kid, a guy I like a lot.”

The 905 were happy to add Hall and Cumberland to the lineup with multiple players out of the lineup with injuries. Jalen Harries continues to recover from a dislocated finger and Breein Tyree will miss the remainder of the season with a torn ACL. The Raptors did welcome Gary Payton II and his elite defence against the Swarm.

It was a crazy day for Mutumbo, who has been caught up in rumours he will be asked to step on to the Toronto Raptors bench. The Toronto Raptors’ head coach, Nick Nurse, was placed on the COVID- 19 Health and Safety protocols along with five other coaches Friday. At this point in time, it is unclear what the Toronto Raptors will do with their open coaching positions or when Nurse and his assistants will return.

Stauskas was not the only Canadian to have a good night as Dartmouth, NS native, Nate Darling, continued his strong play as of late. Darling scored 13 points and went 4-8 from the three point line.

It will be a quick turnaround for the 905 who play their second game of a back-to-back against the Westchester Knicks Saturday afternoon.