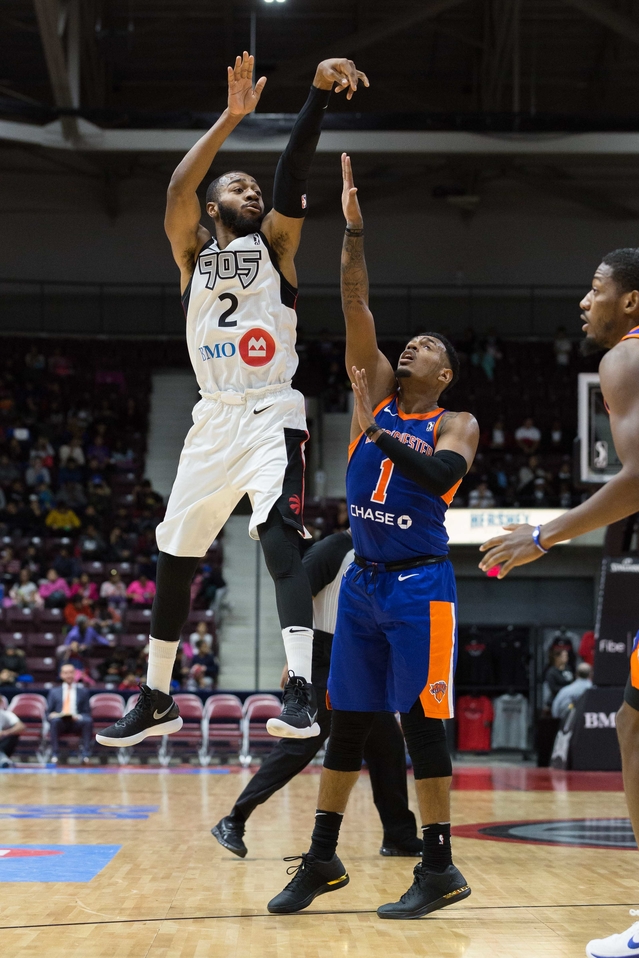 Raptors 905 Win Yet Another Thriller Against Westchester

Heading into the second game of a home-and-home set against the Westchester Knicks, the Raptors 905 were looking to get going offensively. The 905 had not scored over 100 points since dropping 106 in their season opening loss against the Grand Rapids Drive.

Boy, did they ever get going.

Lorenzo Brown led five 905 players that scored in double digits with 29 (20 in the second half), including a team high seven assists, as they beat the Knicks 112-109, for the second time in three days. The 905 improved to 3-2 and go over .500 for the first time this season.

“The guys trusted me to make big plays towards the end,” Brown said. ‘I put it upon myself to do that.”

Bruno Caboclo continued his solid start to the season as he filled up the stat sheet, finishing with a double-double (21 points, 10 rebounds) and had a team high three steals.

Kennedy Meeks was an instant spark plug off the bench as he took advantage inside, finishing with 18 points. Aaron Best chipped in with 14 on four triples while the hero from the previous game, Davion Berry, chipped in with 12.

It was the second straight game in which things came down to the last seconds.

“Guys are finding a way to execute. That’s huge for a young team that we have,” 905 head coach Jerry Stackhouse said. “We’ve got a lot of guys that were in college last year and still learning how to win at the pro level. When you have games like the one in New York and tonight, it builds your confidence up.”

Westchester (3-3) had six players in double figures, with Luke Kornet and Trey Burke scoring 24 points each. Nigel Hayes had 20 while Paul Watson had 13 points off the bench and Isaiah Hicks had 10.

Xavier Rathan-Mayes, of Markham, Ont., made his return to Canada and continues to make strides professionally as he transitions to a point guard. Rathan-Mayes was two rebounds away from finishing with a triple-double, as he had 12 points, eight rebounds, and a game high 14 assists, along with a game high four steals.

“He’s a really savvy point guard, one of my favourites, actually,” Stackhouse said. “I was at the Miami game when he had 30 in the second half. He has a flair for some excitement and he knows how to pass the ball so I wish him well.”

The 905 overcame a 12 point halftime deficit and sent 4,827 fans, most of them children, home happy. Burke had a chance to send the game into overtime but his corner three point attempt went off the back iron, and into the hands of Caboclo, sealing the 905 win.

“That was beautiful,” Stackhouse said when asked about the crowd. “The kids were great; they came in and (were loud). Hopefully, they enjoyed the game.”

Stackhouse made a joke at assistant coach Nikki Gross’ expense, saying, “The kids threw off our butter call late in the shot clock. It’s always Nikki with the high pitch but with the kids’ high pitch, (we) couldn’t distinguish the butters today.”

Both sides started off strong offensively as Burke scored seven points in the first three minutes of the game. But Best hit back-to-back triples to put the 905 up 15-11, forcing a Knicks timeout.

The second quarter saw the Knicks continue to shoot the lights out from the field, going up 36-28 early, with Rathan-Mayes picking apart the 905 defence with his facilitating.

However, the 905 were kept afloat by some timely contributions from Canadians Richard Amardi and Kaza Keane. Amardi scored all nine of his points in the second quarter, including back-to-back offensive sequences when he hit a three and followed with a mid range jumper after a shot fake. Keane had five of his seven points in the quarter alone.

A layup from Keane cut the lead to 44-42 before the Knicks went on a 12-4 run to extend their lead to double digits, taking advantage of six 905 turnovers in the second quarter. A block and subsequent three from Caboclo seemed to spark the 905 but the Knicks scored five straight points, off a layup from Hayes and another triple from Kornet, gave them a 61-49 lead at halftime.

Westchester had three players in double figures at the half. Kornet had 16 points on four triples while Burke had 12. Hayes scored all 11 of his first half points in the second quarter and the Knicks hit a scorching 71.4 per cent (10-14) from downtown. Despite only having two points at the half, Rathan-Mayes had nine assists in the first half alone and was a +13 on the court.

Meanwhile, Brown and Amardi, who had nine points apiece, led the 905. Turnovers hurt the Raptors as they committed 10 in the half and were outscored 22-18 in the paint as well as 30-21 from behind the arc.

Determined to come out with a sense of urgency, Meeks started at center in the second half in place of Andre Washington. The Raptors started off via a three point play from Caboclo. This sparked the 905 to tie the game at 65 (first tie since late in the first quarter at 24-24) on a 16-4 run.

The Knicks’ Jordan Henriquez came right back, cramming a left handed dunk over Meeks but he responded with a layup to take back the lead. Westchester was up 76-75 late in the quarter before Brown scored six straight points for the 905.

A contested triple by Burke, however, trimmed the 905 lead to 83-81, heading into the final frame. Brown had 12 points in the third quarter for the 905 while Hayes had nine in the frame for the Knicks. The Raptors took much better care of the ball, committing just one turnover in the quarter and after attempting just three free throws in the first half, they hit all 13 of their third quarter free throws.

Rathan-Mayes started off the final frame with a spinning layup to tie the game before Caboclo then hit a pair of free throws. Westchester forced a timeout from Stackhouse as they scored the next six points, capped off by a dunk from Watson after a steal attempt from Amardi.

Best then hit a triple to cut the lead to one before the Knicks scored four consecutive points. However, the 905 went on a 10-0 run, highlighted by back to back triples from Best and Caboclo. Both teams then exchanged baskets in the next two minutes, highlighted by a mean ball fake and layup from Brown.

Rathan-Mayes and Brown both exchanged big threes as the 905 led 106-100 with less than two minutes to go. A floater from Burke and another three from Kornet trimmed the Raptors lead to 106-105 with 1:29 left in the game.

Neither team scored on each of their next possessions and Brown had the ball with a chance to extend the Raptors lead. However, he threw the ball away, committing one of his five turnovers in the quarter, giving Westchester a chance to take the lead with 32.9 seconds left in the game.

‘I want him to be aggressive and use his ability to get in the paint and score,” Stackhouse said. “But I want him to take care of the ball; six turnovers is too much. He’s open minded and he’ll get better in that department as the year goes on.”

Burke attempted a floater in the lane but was fouled by Best, sending him to the free throw line as the crowd was clearly displeased at the call and booed him heavily.

Clearly, the kids screaming must have worked as Burke, a 84.2 per cent free throw shooter from the line heading into this game, missed both. The 905 grabbed the rebound and Caboclo was intentionally fouled; he did not waste any time, making both free throws.

Westchester called a timeout but did not get back on the court in time when the whistle blew, earning a delay of game technical. Berry then made the ensuing free throw, putting the 905 up by four. However, Rathan-Mayes made another huge triple with 7.7 seconds left, cutting the 905 lead to one again.

Caboclo was intentionally fouled once again but split the pair of free throws this time. Kornet grabbed the rebound but was fouled, giving him a chance to tie the game.

However, Kornet missed the second free throw and Berry grabbed the rebound. He was intentionally fouled and subsequently made both free throws.

Westchester then advanced the ball to half court with a chance to tie but could not convert, giving the 905 another narrow victory.

UP NEXT: The 905 continue their five game homestand as they play the Lakeland Magic on Saturday Nov. 18 at 2:00pm.