The Toronto Raptors had their best regular season in franchise history with 59 wins and a culture change on the offensive end that switched from isolation ball to an egalitarian system. The young bench more than exceeded expectations on both ends of the floor and Toronto finished atop the Eastern Conference for the first time ever.

None of that changed the fact that this season ended the way it did last year… which was a second round sweep at the hands of LeBron James and the fourth seeded Cleveland Cavaliers.

Toronto’s season ended Monday night in a 128-93 thumping at the hands of the Cavaliers at Quicken Loans Arena in which the visitors were outclassed from the midway point of the second quarter.

It is the third straight year in which the Raptors’ season has ended at the hands of the Cavs and now have a 10 game playoff losing streak against them, dating back to Game 5 of the 2016 Eastern Conference Finals. Toronto’s shooting simply wasn’t there in the game as they shot 26.7 per cent (4-15) from behind the arc.

All five starters scored in double figures for Cleveland, led by James with 29 points and a game high 11 assists to go with eight rebounds as he continues to leave his mark during this postseason. Kevin Love had 23 points while Kyle Korver hit four triples and scored 16. J.R Smith was perfect from the field with 15 points and George Hill had 12.

Five players scored in double figures for the Raptors, led by 18 points off the bench from Jonas Valanciunas in 16 minutes. DeMar DeRozan and CJ Miles each had 13 while Serge Ibaka had 12 and Delon Wright chipped in with 10. Kyle Lowry led Toronto with 10 assists in the loss.

To add insult to injury, DeRozan was ejected late in the third quarter via a Flagrant 2 foul after hitting Jordan Clarkson in the head while he went up for a layup. Even worse, Clarkson made the shot.

Both teams started off red hot to start off the game but the Raptors had two straight defensive breakdowns in which Hill went to the basket untouched for dunks.

Valanciunas made his presence felt on the offensive end as Toronto took a 38-36 lead four minutes into the second quarter. After a pair of Cavalier baskets and a layup from Miles, Korver hit a triple to break a 40-40 tie with 6:49 left in the first half to give Cleveland the lead for good, part of a 7-0 run.

It was 51-47 when Raptors head coach Dwane Casey, in somewhat of a strange decision, subbed in Lucas Nogueira for Ibaka with 2:44 left in the half. Cleveland then went on a 12-0 run the rest of the way as they took a 63-47 lead into intermission.

It was the James and Love show in the third quarter as both of them combined for 27 points, outscoring the Raptors by themselves in the quarter alone. Cleveland shot 68.4 per cent from the field in the third frame as Toronto had no answer for them defensively, and the top seed in the East were 12 minutes away from elimination, trailing 100-72.

Both teams then emptied out their benches for the majority of the fourth quarter as the Quicken Loans Arena fans began to celebrate what turned out to be a dominating series from the Cavaliers.

A full breakdown of the Toronto Raptors’ season will be up later on. 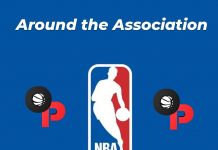 CIS Men’s Final 8 championship behind the scenes video series “In... 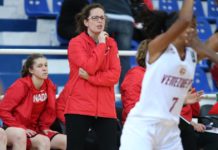