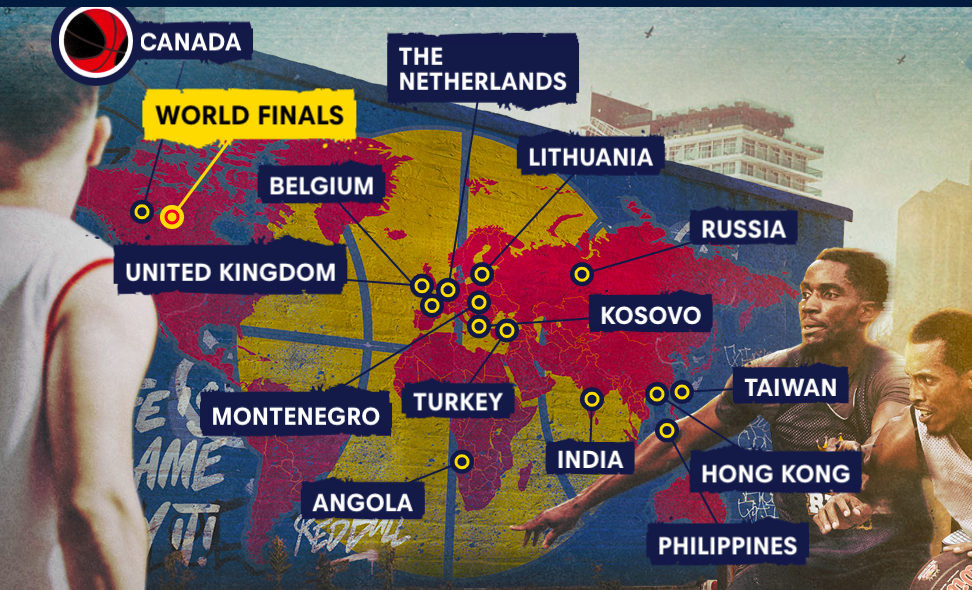 Toronto is still abuzz with the NBA Finals’ victory. This past Saturday, Red Bull continued to build on Toronto’s basketball mania by running its Red Bull Reign 3×3 regional qualifier tournament. Winners from cities across Canada — Toronto, Ottawa, Winnipeg and Vancouver — will be selected to compete for the national qualifiers on August 30th. Canada’s winner will then advance to the world championships, which will also be hosted in Toronto the following day on August 31st.

On Saturday, the weather was forecast to rain, but the Basketball Gods allowed the sun to shine on Exhibition Place, where both women’s and men’s division competed in round robin matchups.

The women’s finalists and the men’s semi-finalists were then, quite literally, shuttled onto a bigger stage at the Bentway in the Fort York Historical area. Basketball was added to the Red Bull-sponsored Collectif NUDE block party to rile up the crowd. The court was designed by Legends League founder Bryan Espiritu and by merging both basketball and music, created a vibrant atmosphere as the crowd locked into the hoops action.

She The North won the Toronto qualifiers for the women’s division defeating Royals and the men’s final – Team On Point versus PSLY — was a back-and-forth affair. The men’s final ended in a tie in regulation, and the game went into overtime.

As per FIBA 3×3 rules, the first team to score two points wins in overtime. Team On Point’s Daniel Gordon, who posterized a defender earlier in the day, continued to dominate. In overtime, he attacked the rim, drew the help defender and unselfishly dished the ball out to Darnell London who hit the two-point shot in a dramatic finish.

For professional basketball players like Gordon and Landon, summer tournaments are crucial for staying prepared, as increasing their reputation and network.

“Being a part of these tournaments, you get a chance to put your name out there. I’m just trying to show that I’m a good basketball player in the city of Toronto,” said Gordon who stays humble, but remains hungry for his next pro season.

After the women’s and men’s regional champions were crowned, the crowd participated in the three-point shooting contest and the block party’s basketball wrapped up with a dunk contest.

She the North and Team On Point will compete in the national qualifiers on August 30th.

Streetball legend Joey Haywood, better known as King Handles, will also be in attendance to represent Vancouver. He is excited that Red Bull Reign coincides with the Raptors’ NBA Finals victory, as more players will come out to the blacktop this summer.

“Red Bull Reign started at the right time, especially when the rise of basketball is increasing in this country and around the world. It gives hoopers an opportunity to showcase their talent and travel the world,” said an excited Haywood.

“This gives players a chance to record their games and put together a highlight reel that they can post and share around the world. That can lead to sponsorships, playing pro overseas. Red Bull is doing an amazing job and will improve every year. I’m just blessed to be part of their journey.”

Mark your calendars for Friday, August 30th and Saturday, August 31st (Labour Day weekend) as some of the best 3×3 players in the world will compete for the world Red Bull Reign title right here in Toronto

Written by Teru Ikeda. Check Teru out on Twitter