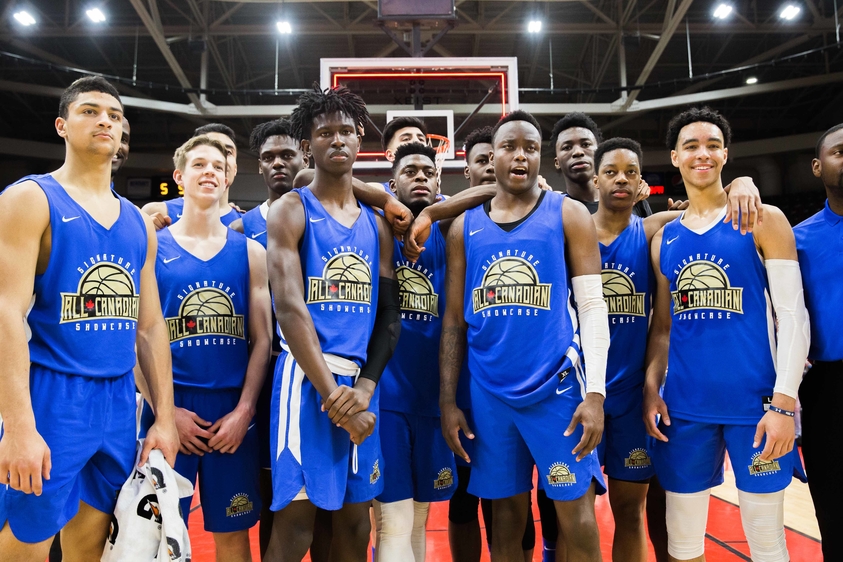 ebankaMISSISSAUGA, ONT.- The 2018 Inaugural Signature All-Canadian Showcase featured the top Canadian high school basketball players going up against each other at the Hershey Centre.

R J Barrett put on a show in his hometown, going on a scoring outburst and finishing with a game high 47 points on seven made threes as he was named the MVP for Team White. 24 of his points came in the second half as he dazzled the crowd with acrobatic layups, stepback threes, and thunderous jams.

That wasn’t all, though, as he was a menace protecting the rim with a game high five blocks.

But it was Montverde Academy teammate Andrew Nembhard who had the last laugh amongst the two good friends as Team Blue defeated Team White, 138-135.

Noah Kirkwood (Harvard commit) hit the go-ahead triple to break a 131-131 tie and put Team Blue up for good with 1:06 left in the game.

Nembhard’s facilitating and all-around play were on full display in front of 30 NBA scouts. But the Montverde Academy point guard had help, however, as Luguentz Dort (Arizona State commit) and Kaosi Ezeagu (GTA Prep) combined for 56 points; the two of them were named co-MVPs for Team Blue.

“They’re both two guys that bring a lot of energy,” Nembhard said, praising the play of Dort and Ezeagu. “I feel like that their energy translates seamlessly (on the court) and it wins games.”

“A lot of places where I’ve played at, I’ve had to do a lot of stuff. So playing with him, I got to rest a little bit and save my energy,” Dort said about Nembhard. “He’s a really great passer and he’s one of the best I’ve ever played with.”

Dort, in particular, added on to his hardware collection as he was awarded MVP honours in consecutive years for the Biosteel All-Canadian Game. The six-foot-five Orangeville Prep guard from Montreal, Quebec, finished with 29 points and a game high 12 rebounds along with four steals, showcasing his aggressiveness getting to the rim and finishing on second chance opportunities.

Ezeagu rocked the rim throughout the night with several highlight-reel dunks as he finished with 27 points and went 10 of 12 from the charity stripe while Jahcobi Neath, from Crestwood Prep, dropped 20 points on four made triples for the winning team.

Brampton, Ont., native Jaden Bediako was impressive in the showcase, finishing with 21 points for Team White. The six-foot-10 centre from Ridley College wowed the crowd with his work in the low post and showed off a soft shooting touch from the midrange.

Forward Tyrese Samuel, who plays at Wasatch Academy in Mt. Pleasant, Utah, scored 11 points including a massive one handed jam late in the game while Sunrise Christian Academy’s (Bel Aire, Kansas) southpaw guards Khaleem Bennett (Central Arkansas commit) and Isaiah Bujdoso each had 10 points as they showed their craftiness around the rim.

Team White overcame an 18 point first half deficit (73-55) and used a 16-0 run midway through the third quarter to take their first lead since 2-0. But it was Team Blue, who rallied from 10 down (114-104) in the fourth quarter with clutch plays down the stretch to secure the victory.

“Our coaches told us to keep going,” Nembhard said. “We all believed in ourselves and got the job done.”

“It’s really great to compete against one of the best players in the country,” Dort said about Barrett. “It’s a good opportunity to prove yourself.”

In the second quarter, Dort came alive, scoring 14 points and a triple from Nembhard gave Team Blue its largest lead of the game, but Team White closed the first half out on a 13-4 run as they trailed 77-68 at intermission.

Team White, on the strength of Barrett’s 15 third quarter points, took its first lead since the start of the game after a spinning floater in the lane from the Montverde shooting guard. Barrett also hit three triples in the quarter alone as his team closed out the quarter on a 28-12 run as they took a 108-102 lead heading into the final frame.

A reverse layup from Barrett pushed Team White’s lead to double digits before Team Blue began to chip away at the lead. Blue had two occasions where they scored six straight points but both times, it was ended by a pair of three point plays from Bennett.

Team Blue eventually retook the lead at 130-129 after a steal and a dunk from Nembhard with 1:56 to go before Samuel’s dunk gave Team White the lead again. After Ezeagu split a pair at the line, Team White couldn’t convert on the offensive end, which led to Kirkwood’s corner triple.

Barrett and Ezeagu then exchanged the game’s next eight points as Team White called for time with the ball, down 138-135. Barrett then had the ball in his hands with the game on the line and Nembhard guarding him but was fouled before he could get a shot off.

“We’re both really competitive guys and love competing out there so it was real fun,” Nembhard said with a smile. “I just tried to get the stop and we ended up getting the W.”

Barrett missed the first free throw and then missed the second intentionally, however, Team Blue got the defensive rebound and dribbled the ball out as time expired.