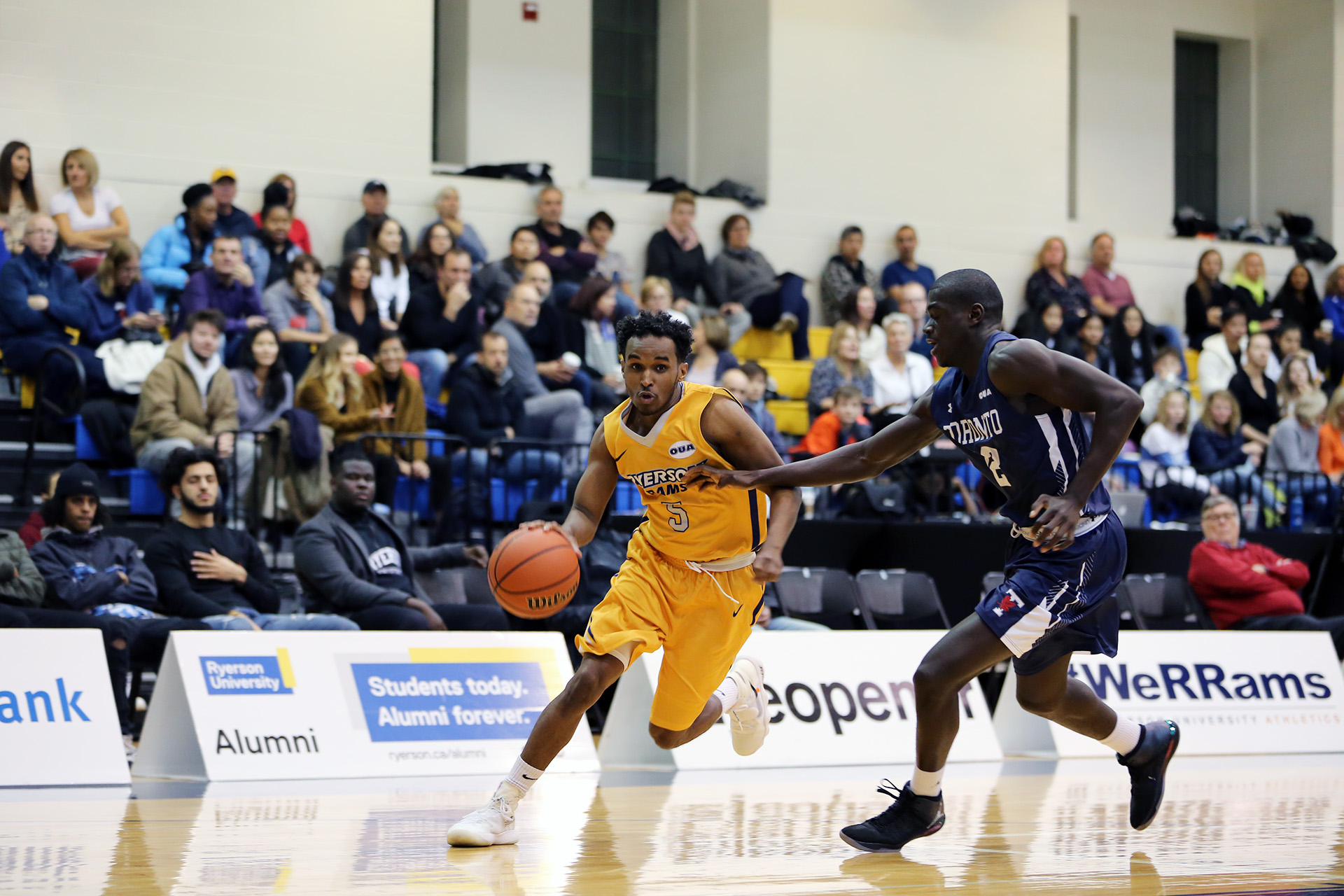 Ryerson Rams Men’s and Women’s teams get sweep vs. U of T Blues

Home » On Point Blog » Ryerson Rams Men’s and Women’s teams get sweep vs. U of T Blues

The Ryerson Rams and the University of Toronto Varsity Blues kicked off their OUA seasons Friday night in an all-Toronto matchup at the Mattamy Athletic Centre, with back-to-back games between the Women’s (WBB) and Men’s (MBB) basketball programs.

Second-year guard Jama Bin-Edward led the way for the Ryerson Rams women’s basketball team with 13 points and 9 rebounds, with Katherine Follis adding 13 points of her own as the Rams outplayed the Varsity Blues on both ends of the floor Friday night leading to a 67-37 victory.

Charlotte Collyer scored a team-high 11 points for the Varsity Blues, while Fiorella Granda and Christine Jurcau both added 8 points, including two 3-pointers each.

The Rams were missing Sofia Paska tonight due to an injury suffered during a recent exhibition game, but the the three-time OUA first-team all-star will be relied on throughout the season to anchor what has so far been an advantageous front court that possesses a combination of size along with high-percentage shooting around the basket.

Paska, a fifth-year senior, is coming off of a stellar 2017-18 campaign in which she was named OUA first-team all-star and USports second-team All-Canadian averaging 20.3 points per game and 9.3 rebounds per game.

The Rams fell short to the Carleton Ravens in last season’s Critelli Cup Playoffs in the quarter-finals, but with the return of Katherine Follis (who has missed games in the past two seasons due to injuries) and the addition of Hayley Robertson (transfer from University of Vermont), the Rams have positioned themselves to make a deeper push this season in the Critelli Cup and USports Final 8.

For the Varsity Blues, Friday night’s game also marked the return of fourth-year forward Collyer, who played only one game last season before missing the rest of the year due to an injury. Collyer is expected to add a presence in the high-post, paint and wing positions for the club. Fourth-year guard Keyira Parkes, who averaged 16.8 points per game in the 2017-18 season, struggled Friday night going 0 for 9 from the field, but will prove to become one of the Varsity Blues’ biggest offensive threats once again.

The Rams are entering a season in which the university will be hosting the USports Women’s Basketball Final 8 in Toronto for the first time since the 1989-90 season.

Jama Bin-Edward of Ryerson drives past U of T defender

The Ryerson Rams men’s basketball team wasted no time kicking off their 2018-19 campaign by coming out of the gates with a 19-0 run in the first quarter, leaving the University of Toronto Varsity Blues with little opportunities to recover.

Rams forward Filip Vujadinovic had a game-high 25 points, scoring 5 of 9 from 3-point range, to lead Ryerson to their first victory of the season.

J.V. Mukama scored 16 of his 19 points by halftime, helping to put the game out of reach with a 59-16 lead after two periods. Jayden Frederick and Keevon Small scored 13 points and 10 points, respectively, providing the Rams with athleticism and energy off the bench on both ends of the floor, including a couple of putback dunks as well as defensive stops.

Evan Shadkami, a USport All-Rookie last season, led the Varsity Blues as the only double-digit scorer with 12 points and 3 assists.

Coming off of a silver medal finish in both the OUA Wilson Cup and USport Final 8 in 2018, the Ryerson Rams are expected to make another deep push into the OUA Playoffs and National Championships this season, despite losing Manny Diressa, who led Ryerson with 21.8 points per game.

The Rams have a dominant veteran presence in Mukama, Myles Charvis and Vujadinovic, who all have the ability to shoot from the 3-point line and attack the basket. 7’2” center Tanor Ngom is also expected to have a bigger impact this season as he continues to develop his play around the basket. Ngom was named an OUA All-Rookie last season and became the first-ever USport player to participate in the Nike Basketball Academy this past summer.

Despite Friday night’s large margin of defeat for the Varsity Blues, the team hopes to build off of last season’s 14-10 record and return to the playoffs this upcoming February with the leadership of seniors such as Daniel Johansson, Nikola Paradina and Christopher Barrett.

OUA Friday Night Basketball: Around the League (winner in bold)