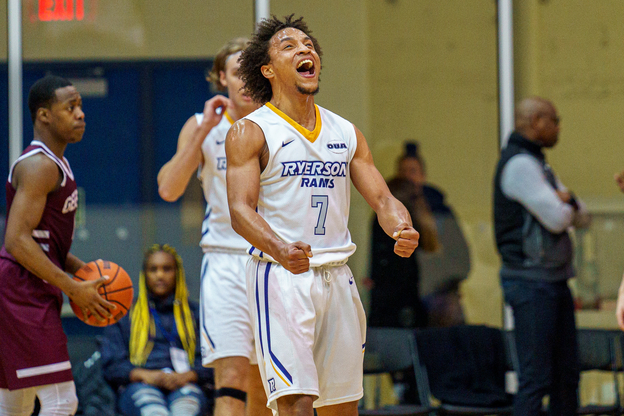 (Toronto, ON) As the OUA season gets closer to the playoffs, the Ryerson Rams were set to host their annual back to back against the Ottawa Gee Gee’s and the Carlton Ravens. The Gee-Gee’s would be the first test of the weekend for the Rams lead by fifth year veteran & Toronto native Calvin Epistola.

The Rams were red hot and on a 5-game winning streak and relied on their recently reunited big three of Jayden Frederick, Tanor Ngom and Tevaun Kokko. The overwhelming presence of fans, media and University alumni alike who were in the Mattamy Athletic Centre is a testament to the growth of the Canadian basketball scene.

The game itself opened up at a fast pace with Gee-Gee’s Gage Sabean showing off some early three point shooting. The Rams were paced by Kokko’s 14 first quarter points, which included an ankle breaking crossover and nice take to the rim. Frederick added five late first quarter points and the Rams would finish out the quarter trailing 23-26,“We knew this was going to be a battle for us, we just had to stay consistent and locked in defensively,” stated Ryerson’s Kokko after the game.

Ngom held most of the spotlight throughout the second quarter. The Ryerson big man has really grown in his versatility, as he was able to grab nine rebounds in the frame, he also hit a 3 pointer, made all of his free throws and added a steal for good measure.

The Rams would re-claim the lead by half time going into the locker room up 39-32. Ngom, the Rams 7’1 center has really evolved his skill set and tailored it to NBA or G League potential. “ We all now how hard he works “ says Ryerson alumni Mukama. Mukama who is back from playing professional basketball in Rwanda, commented that “ Ngom is a big part of the culture that we are trying to build here at Ryerson.”

Ngom, who has been in Toronto and away from his family in Senegal was surprised by his mom at his birthday celebration last weekend – he had not seen her in nearly 4 years. It was heart warming to see her at the game, and the all-star calibre performance Ngom delivered for her.

Ngom would continue to impress in the second half beginning with a stadium-shattering dunk and he completely imposed his will on the defensive glass for the Rams. Ryerson guard Kokko is one of the top emerging players in the OUA this season and he has a propensity to score in the paint and has handles that resemble Kyrie Irving’s.

Frederick got things going in the second half and the Rams were able to out pace the Gee-Gees and finish the third quarter with a 19-point lead. Although Gee Gee’s guard Epistola and forward Guillaume Pepin had relatively quiet nights on the scoring side, they fought admirably to prevent the game from getting out of hand. A few three pointers and impressive lay-ups in the fourth quarter were not going to be enough for the Gee-Gees as the damage had been done as Ryerson went on to win the game 91-67.

It is this combination of Fredrick, Ngom and Kokko that makes Ryerson particularly dangerous, “We’ve had a great start to the second semester,” said Kokko. “This is the first time all year we’ve really had everyone healthy and going.”

The real test for Ryerson will be Saturday night against a 16-0 top-ranked nationally Carleton Ravens team. “We’re definitely prepared,” Kokko continued. “I’m not going to give you any hints but we work and have a lot of confidence in our team. This is a definitely a statement win for us, to come out here and beat a solid time like this means a lot.”

This win will most likely result in Ryerson getting a well-deserved Top-10 National ranking in next week’s polls. They will try to keep the momentum and team building going as they face Carleton as mentioned above, followed by the McMaster Marauders (9-6) and the Brock Badfers (9-6).

Co-Players of the Game

Written By Berkeley Moses – Check Berkeley out on Instagram @Solidasabball

Photos by Reuben Polansky-Shapiro. Check out Reuben on Twitter