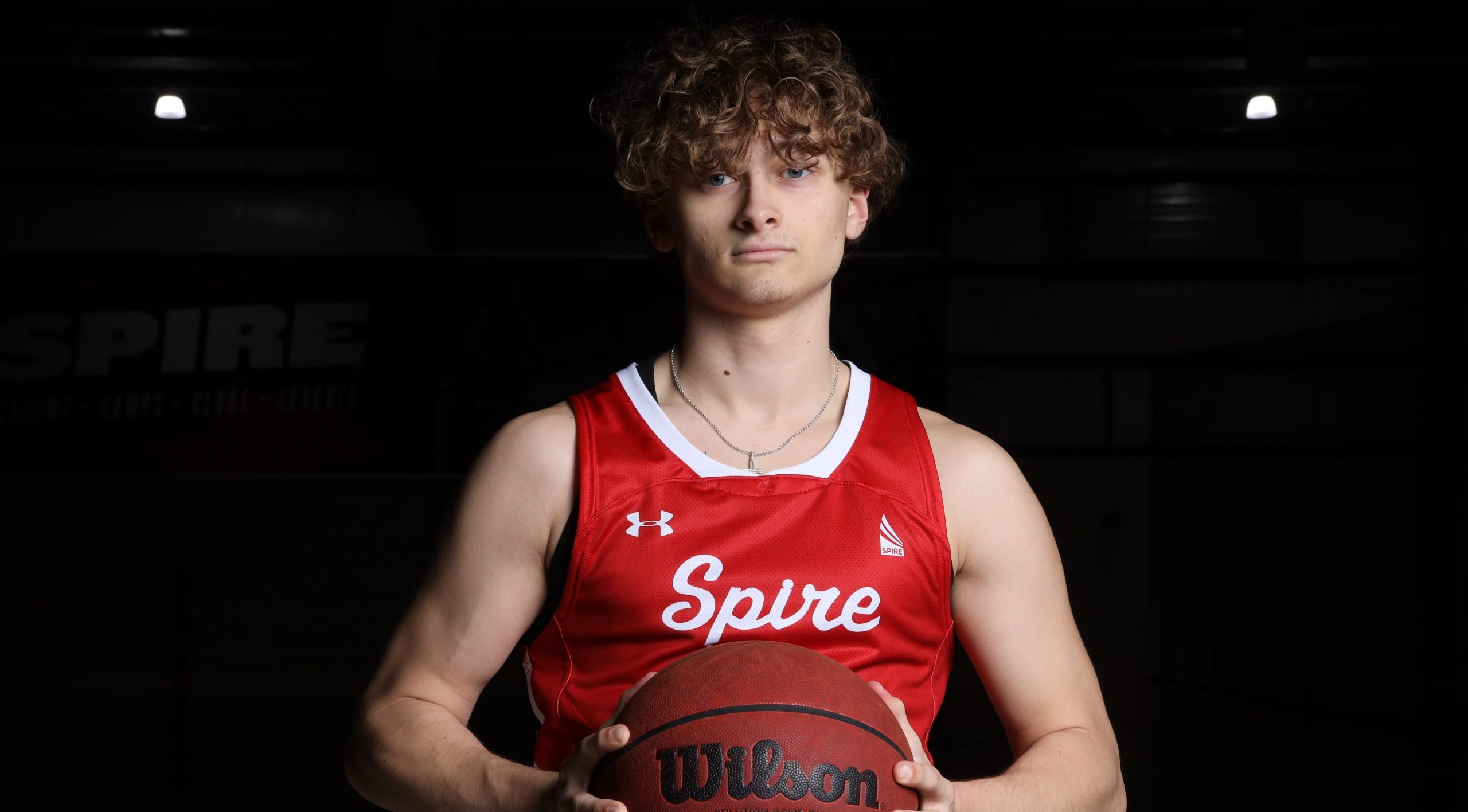 By Shaun McLeodJanuary 20, 2023No Comments

Injuries early on in an athlete’s journey can be a significant setback that causes a fork in the road, forcing them to reconsider their commitment – but for Schomberg, Ont. native Riley Melvin, a torn meniscus was the start of a journey that found him at SPIRE Academy in Ohio  on the brink of realizing his dream of playing university basketball.

Melvin, who had just made Northern Kings’ AAU roster at the time, noticed his knee had been giving him issues throughout practice and initially ignored the discomfort because “that’s what any 17-year-old kid does”, but pain on a routine curl drill eventually led to him getting looked at.

“I booked an appointment with my physio that same day,” said Melvin. “She said, ‘honestly, I think it’s your ACL’ and that just wasn’t what I wanted to hear a week into my season.

An MRI revealed a significant meniscus tear shortly after, but through visiting with experts, Melvin found the tear was in good shape, with good blood flow, and didn’t require any surgery. Within six weeks, Melvin was back and didn’t miss a single game that year.

“For me, it was just about getting back into the swing of things as quickly as possible,” said Melvin. “I knew I was out of shape at the time.”

While sidelined with the injury, Melvin continued to attend practices to absorb the schemes but coming back from the injury, he would be behind the others who had participated, and he would have to work twice as hard to earn time with the Northern Kings. Melvin found himself eventually logging heavy minutes on the Northern Kings AAU team, YNBA through March, and Aurora Elite Training (AET) after April, a second-year program that Melvin says won a “weird amount of games,” considering their experience.

“It was just a ton of playing time,” said Melvin, who averaged 14.3 points a game at AET. “It taught me a lot about resting and different types of recovery that I hadn’t thought of before (with my knee).”

Melvin says the grind of playing time was a lot, but it was ultimately worth it as he started a bit later than everyone else. He estimates he played nearly 100 game reps in the 2022 season, which was perfect for him to make mistakes, learn from the film, and continuously learn.

After the season, Melvin weighed his options, looking at a fifth year where he would attend Royal Crown Academy in Toronto, against D3 and U Sports offers until contact information for SPIRE Academy coach Michael Dooley came to him by way of a former coach. Melvin quickly sent him game tape and had several conversations with Dooley over a month and a half.

“The first thing I noticed is that he really cared,” said Melvin. “He texted me everyday, checked up on me to see how the season was going, talked to my coaches…he was super involved in the end of my season.

The visit to SPIRE Academy’s multimillion-dollar facility in Geneva, Ohio with seven basketball courts sealed the deal for Melvin. Spire notably helped develop LaMelo Ball before his departure to Australia prior to him being drafted third overall in the NBA draft.

“It became a no-brainer very quickly,” said Melvin. “It was a perfect fit.

Since attending SPIRE Academy in August, Melvin has continued to grow his game defensively and physically by putting on 18 pounds, something Melvin says is huge for him as he’s had to adapt to the larger bodies and more intense defensive scheme.

“It’s not like Canada,” he said. “I’m guarding a Cleveland State commit every day…my roommate is a six-foot-seven, 230-pound man-child committed to Omaha. The players I get to go up against every day are where I’ve grown the most.”

This summer, Melvin will have to revisit the decision of what to do next, but with a clear eye toward playing university basketball this time – the only unknown is where he’ll be doing it. He says U Sports and NCAA D3 schools are still in the mix, and D2 schools have also entered the mix.

“I’m at the point where I want to narrow it down, get to my last three, and finalize it from there,” said Melvin.