(Toronto, Ont. August 15, 2014) – Canada Basketball has selected the roster of athletes who will compete with the Senior B Women’s National Team at the 36th William Jones International Basketball Tournament in Taipei, Taiwan.

Head coach Fabian McKenzie will be leading the team through the tournament, where the team will look to gain experience against quality opponents.

“”We are looking forward to our trip to Taipei to represent Canada Basketball in the Jones Cup. Our team has put in a tremendous amount of work throughout training camp and is ready to put what they have learned into action. I have been very impressed with the performance of our group and I am excited to see them play,” said McKenzie.

Canada will play five games in the tournament. A full schedule, roster and coaching staff can be found below. 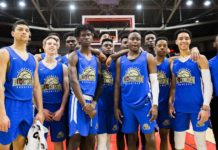