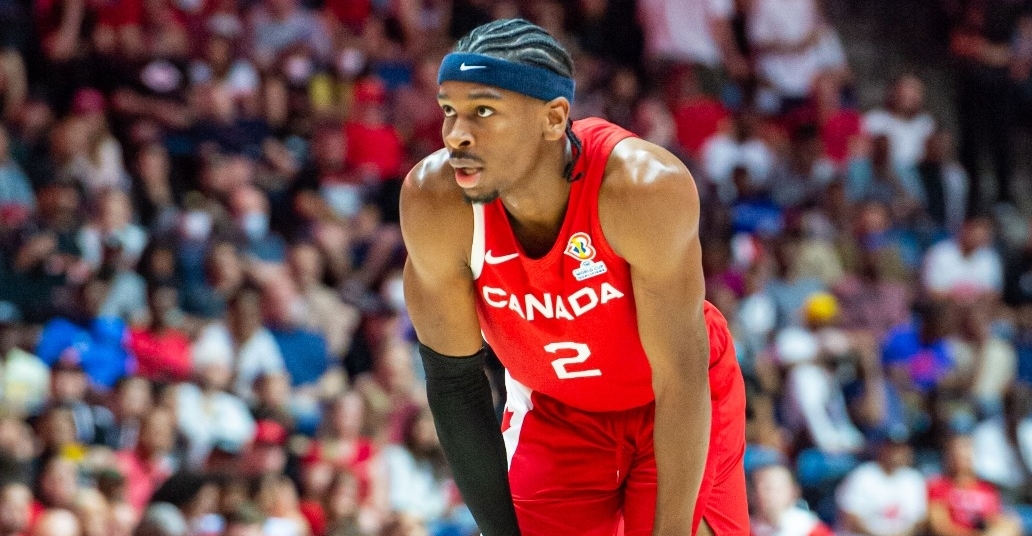 By Shaun McLeodJuly 2, 2022No Comments

It was a Canada Day to remember for Canada Basketball as they took a 95-75 victory off the Dominican Republic to clinch first place in Group C in the FIBA World Cup Americas Qualifiers.

One of the hometown boys, Shai Gilgeous-Alexander, got the party atmosphere going early with a left-handed dunk 12 seconds into the game – something completely new to the 23-year-old point guard.

Gilgeous-Alexander didn’t just get the game going; he was the engine for the Canadian offence throughout the blowout win with 32 points – 15 of which came in the third quarter alone, where Canada began to pull away from the Dominicans.

Utah Jazz guard Nickeil Alexander-Walker, said his final tally for family and friends in attendance was “60 to 70” after the game. He was able to keep pace with his cousin, Gilgeous-Alexander, throughout the first half, including a half-court buzzer-beater. He ended the game with 17 points, three steals, three assists, and three rebounds, including a buzzer-beater at the end of the first quarter, while continuing his string of solid performances for the national team.

Gilgeous-Alexander said it was just like playing with his cousin in high school, and while they had some kinks to work out at the beginning of the game, they both made the right plays to help the team win.

“We looked good,” said Gilgeous-Alexander with a smile.

Although Canada ended up winning decisively, the Dominicans wouldn’t let Canada run away and briefly took the lead in the second quarter. Victor Liz had 12 points, Jhonatan Araujo had 10 points, and Adonys Henriquez had 14 points to lead all scorers for the Dominicans.

While the Dominicans battled hard, a massive rebounding advantage for Canada started piling up as they dominated offensive glass 25-17. The Canadian defence also turned up the intensity after halftime with multiple highlight-reel blocks, including one from Gilgeous-Alexander that set the tone for the third quarter.

Kelly Olynyk had 17 points and 11 rebounds in his return to the senior men’s national team and said it was fun to play on home soil with a group of new players joining the team.

“I feel like the oldest guy out there now,” said Olynyk. “It’s just fun to get up and down with them. They’ve got a lot of talent and a lot of skill.”

With the game in hand in the fourth quarter, the crowd at the FirstOntario Centre began to chant “We want Edey”, referring to Zach Edey, the seven-foot-four Purdue centre who was the only Canadian player to not see the floor yet in the game. Nurse eventually sent the big man into the game to a roar from the crowd. Edey eventually went to the line and scored his first points for the senior men’s national team with the crowd chanting “MVP.”

While Nurse recognized it was a big moment for the young player, and he appreciated the cheering and noise the crowd was making for his team, he cautioned against not taking Edey seriously as a player for them going forward.

“He’s a serious player…we’re trying to figure out how to put him in the right places defensively and offensively and use his God-given talent,” said Nurse. “He’s improving a lot, and I think he gives us a unique factor. Now we’ve got to build him up.”

The win comes after almost a year’s worth of preparation to add more NBA caliber players to the events leading up to the Olympics and a week that saw not only the new players who played in Hamilton involved, but also players like Jamal Murray and RJ Barrett who have committed to the team but wouldn’t be available for this window as well.

“It felt like we’ve taken the next step forward in building,” said Nurse. “We had a lot of people in the gym, probably most coaches wouldn’t have liked how many we had in the gym most days.”

It’ll be a quick turnaround for Canada as they’ll head to St. Thomas to take on the U.S. Virgin Islands on Monday July 4th. Canada previously beat The Virgin Islands 94-46 behind 24 points from Kyle Wiltjer.

Also in attendance Friday night was Gilgeous-Alexander’s teammate on the OKC Thunder, Luguentz Dort, who sat behind the team Canada bench in the stands.