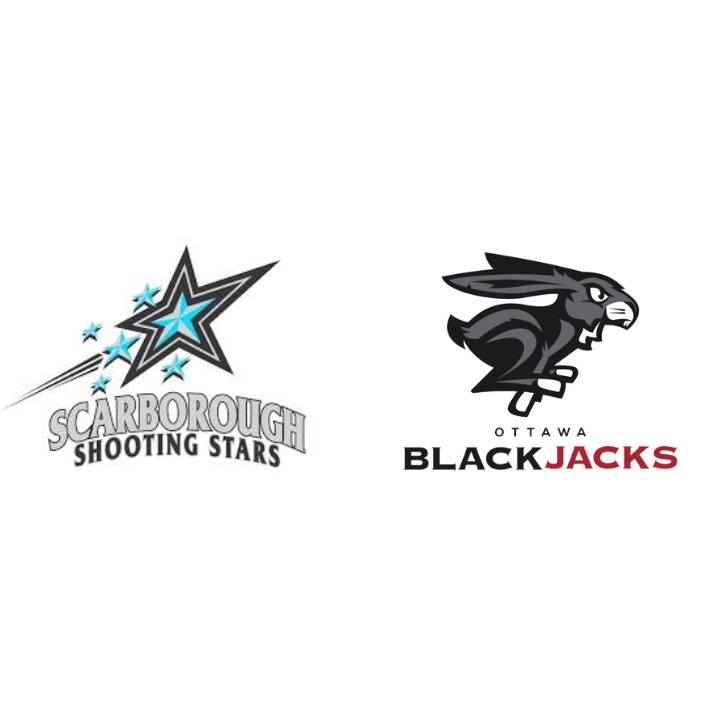 By Kyle OliveiraJune 28, 2022No Comments

The Ottawa Blackjacks completed an incredible road comeback on Monday evening, defeating the Scarborough Shooting Stars 91-90 after trailing by as many as 14 in the fourth.

The win improves the Blackjacks to 3-7 at the halfway point of the year, while it drops the Shooting Stars back to 5-5 after winning 4 of their previous 5.

Scarborough’s home crowd was given an impressive home display off the jump, as the Shooting Stars jumped out to an early 13-0 lead. Through timely three-point shooting and some extremely stingy defence, the Stars led 22-6 after the first and seemed to be in complete control. The Blackjacks began getting visibly frustrated offensively, shooting from the field at just a 15% clip well into the second frame. To Ottawa’s credit they kept the game competitive as the first half dwindled, trailing 40-28 into the break.

From there they applied pressure in the third, starting the second half on an 8-2 run. Scarborough fed off the crowd and got the game back under control though, leading 70-55 after three quarters. Clutch shooting in the fourth from Jalen Harris and Isiaha Mike kept Scarborough in command as they took an 82-68 lead into Elam Ending time, meaning the first team to reach 91 points would win the game. Scarborough were eventually just 1 point away, but 9 unanswered points on back-to-back-to-back threes gave the BlackJacks the most impressive win in the CEBL this season. In fact, the win was the largest Elam Ending comeback in leagRue history.

Deng Adel and Walt Lemon Jr. both finished with 20 points for Ottawa in the win. Lemon Jr. added nine assists for the near double-double. Jackson Rowe went an efficient 4/8 from the floor, scoring 10 points and grabbing nine boards. Tyrell Green had 15 points off the bench on 50% shooting.

Former Toronto Raptors guard Harris led the way for Scarborough in the tough loss, scoring 21 points and picking up 3 steals. Mike had 15 points of his own and collected 10 rebounds for the double-double. Kameron Chatman had 14 while Khalif Young had 11 on 80% from the field. Rashad James rounded out the starters with seven points. David Muenkat was the leading scorer off the bench with nine.

The game seemed to be in complete Scarborough control for 40-plus minutes, but timely three-point shooting ended up being the difference. When the Shooting Stars needed offence the most they went cold and were unable to seal the deal while Ottawa were unable to miss. Green was the hero for the visitors, hitting the game winner as his Ottawa teammates rushed him in a massive celebration at half court. It was a thrilling finish that will surely go down as one of the games of the year.

Scarborough will try to get things back on track as they travel to Langley for a Canada Day showdown with the Fraser Valley Bandits, while Ottawa will be back in action on July 2nd as they travel to Hamilton to face the Honey Badgers.