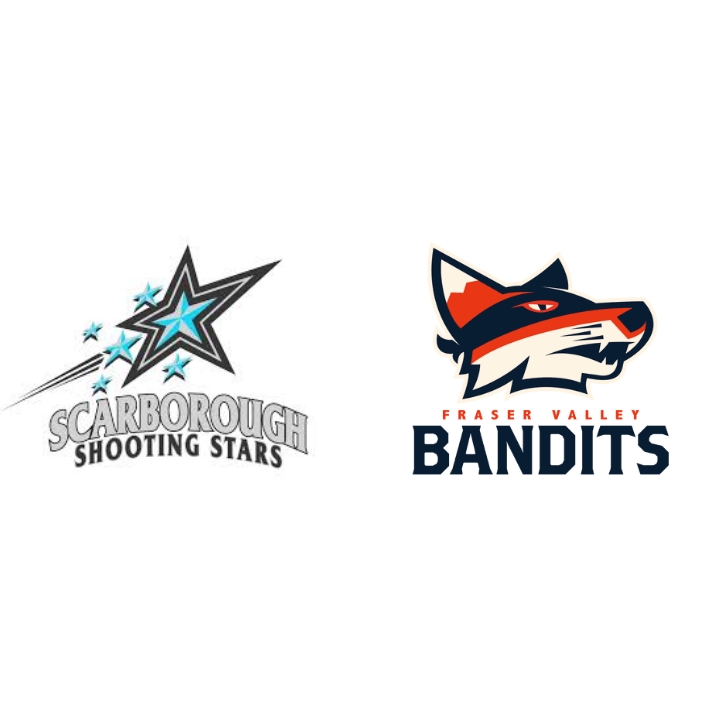 Shooting Stars fall 92-89 to the Fraser Valley Bandits, stopping their winning streak at 3

The Scarborough Shooting Stars’ three game winning streak has ended after a series of unfortunate events cost them in the final moments of their 92-89 loss to the Fraser Valley Bandits.

Scarborough took a few minutes to get on the board, but a big slam dunk from Isiaha Mike got Scarborough on the board. Kalif Young found a mismatch off a pick and roll on the next play, but Shane Gibson responded with a run of his own, with four points and an assist on a Murphy Burnatowski three to allow Fraser Valley to take a 10-point lead over Scarborough.

Alex Campbell got in on the hot shooting start for Fraser Valley, and the bandits crowded the Shooting Stars ball handlers, creating multiple turnovers on their way to a 27-16 lead after 1.

Scarborough continued to look to the pick and roll and began to chip away at the Fraser Valley lead through a variety of looks out of the set, but the Bandits stretched the lead back out to 11 points behind Gibson’s 16 points in the first half.

Harris began to take over the offence for Scarborough after the halftime break, including back-to-back slam dunks on his way to a 22-point, eight-rebound performance. A three-point shot from Scarborough’s Jean-Victor Mukama all but erased the 12-point first-half lead and brought the Stars back to within two points. Xavier Rathan-Mayes would tie it up with another fadeaway midrange jumper.

Fraser Valley took a one-point lead into the fourth, and Gibson got the Bandits started early with a layup at the rim for his 29th point of the night. Burnatowski made it a six-point run before Šarūnas Vasiliauskas made a deep three for his 12th point of the night, followed by one by Kameron Chatman, who cut the lead back down to one. A massive put-back jam from Young gave Scarborough the lead heading into Elam time.

Scarborough started to show frustration with the referees’ calls in Elam time, and both teams traded baskets in search of the 92-point lead. Harris made a beautiful layup in transition, and finding points for either team after became a grind. Kennedy finally broke the scoreless streak to bring the Bandits within three points of the target score, and Chatman followed suit by drawing a foul.

The final minute of play turned into a disaster for the Shooting Stars. Scarborough turned the ball over on an inbounds pass but blocked the shot from Kyle Adnam that would have won the game. The scramble to keep the ball inbounds saw the ball wind up in Gibson’s hands, and he missed an open jump shot. Harris mistimed a dribble on the other end, and Campbell headed to the line where he would ice the game for the bandits.

Scarborough sits fifth in the CEBL after their road trip and will return home to the Toronto Pan Am Sports Centre on June 25th to take on the Hamilton Honey Badgers, who are currently on a six-game winning streak and sit atop the league with a 7-1 record.