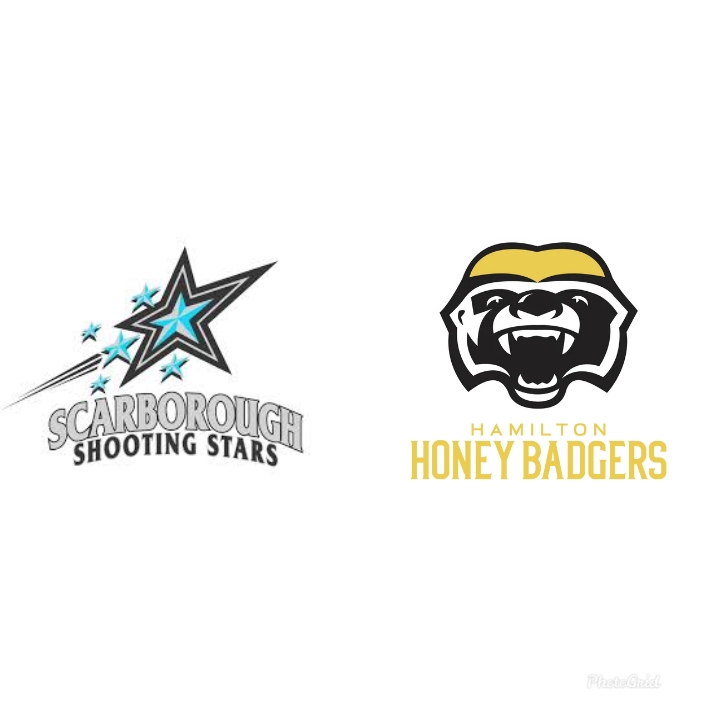 Shooting Stars three-game winning streak over with 84-70 loss to the Honey Badgers, as Jalen Harris leaves with injury

Home » On Point Blog » Shooting Stars three-game winning streak over with 84-70 loss to the Honey Badgers, as Jalen Harris leaves with injury

The Scarborough Shooting Stars’ three-game winning streak has come to an end with an 84-70 loss to the league-leading Hamilton Honey Badgers.

Khalif Young started the game with a dunk for the Shooting Stars (8-6), but the Honey Badgers (13-3) quickly established their shooting early and took a 25-14 lead after one quarter while Scarborough struggled to get their shot going.

The second quarter opened with a parade of dunks for either team, but Hamilton’s three-point shooting and perimeter defence continued to frustrate the Shooting Stars as they shot one-for-seven to open the game from three.

Midway through the second, Shooting Stars’ lead guard Jalen Harris went down with an injury and did not return to the floor this game, playing just nine minutes. An unlikely leader stepped up with Harris out of the line-up, as David Muenkat led Scarborough in scoring with 18 points, eight rebounds, and two steals. Kameron Chatman and Isiaha Mike each added 10 points for the Shooting Stars.

Hamilton would pull away even further with Scarborough’s offence hampered with their star out, taking a nearly 30-point lead into the third quarter.

Caleb Agada had five points, six rebounds and became the all-time leader in assists for the Hamilton Honey Badgers

While Hamilton dominated most of the game, Elam time became a battle with a stream of mistakes leading to turnovers and a final Scarborough run to cut the lead to 12, but a slam dunk from Joel James put an end to the surging Shooting Stars.

Scarborough falls to three games out of first place, all but removing them from contention for the top spot, and all eyes will turn to the injury status of Harris, who was the league’s second-leading scoring coming into this game. The Shooting Stars will host the second-place Niagara River Lions on Sunday, who are looking to make a run for the top seed as they prepare for their final two games against Hamilton this season.

Scarborough vs. Hamilton livestream broadcast below: