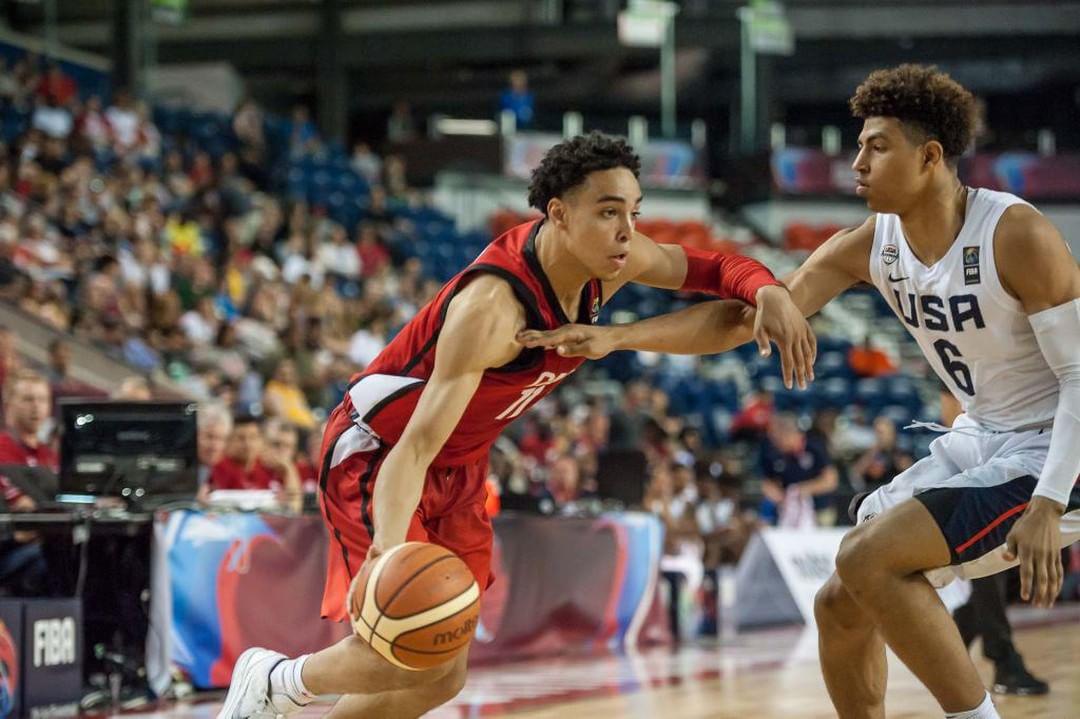 (St. Catherines, ON) Claiming the FIBA Americas silver medal and qualifying for next year’s 2019 FIBA U19 World Cup were not the U18 Team Canada’s biggest accomplishment.

Coming off last year’s gold medal victory at the 2017 FIBA U19 World Cup, the expectation, and believing in its very real possibility, to win gold in St. Catherines was the hallmark of progress.

To Canada’s chagrin, Team U.S.A. dominated the final game. Canada had difficulty scoring against the physical strength of Team U.S.A.’s defence, and on offensive transitions, the latter converted Team Canada’s mistakes into easy buckets. Despite the 113-74 blowout, Canada had a strong third quarter and the team never seemed intimidated.

The summer ahead has a lot in store for Canada’s players like A.J. Lawson, Andrew Nembhard and Addison Patterson. Lawson has officially visited South Carolina, Creighton, Tulane, and will be visiting Oregon soon. Nembhard will continue to improve, playing for and learning from Cory Joseph on the Senior Men’s National team. Patterson will be playing in Argentina at the U17 World Cup at the end of this month. All three players will likely suit up for draft day in the very near future.

In the finals, Lawson led the team with 18 points despite showing some difficulty with contact and finishing at the rim. Rather than becoming intimidated by U.S.A.’s strong inside presence, he kept taking the ball inside and also capitalized on his three-point shooting game, shooting 4 for 9 beyond the arc.

“I’m just going to raise my standards and play harder,” asserted Lawson before the finals. “If they’re D1, we’re D1 too.”

Lawson has the talent to rely on different parts of his game to remain an offensive threat. When he had trouble scoring inside, he shot the three; when shots are not dropping, he can resort to his speed and passing ability to create for others.

University of Florida Gators commit Nembhard, had two James Harden-esque step back threes during the finals, the second one off a behind-the-back dribble. He also used his step back move off the drive, creating shots for himself as he penetrated the paint.

He led Canada in passing, finishing with eight assists. Nembhard has the ability to draw the double team and pass down low, or kick the ball to the perimeter player for an open shot. He was very effective on the pick and roll, displaying perfect timing when throwing the pass to a rolling Jaden Bediako.

“Every time I call Andrew’s name, he wants to come over,” said Smart. “He wants to see if I’m going to say something he doesn’t already know.”

Class of 2020 recruit Patterson demonstrated the same fearlessness Lawson had. Despite being two years younger than Lawson, he played with supreme confidence on both ends of the floor. Even when he had difficulty scoring in the paint, his intensity never waned, continuing to protect the ball and drive relentlessly. On defence, he asserted his presence by swatting the ball away from USA’s leading scorer, Cole Anthony, and Coby White.

When asked about his aspirations to play at the highest level, he remained focused on his process: “My time will come. I’m just going to keep working,” said Patterson.

Not only did Team Canada face the ultimate test before next year’s World Cup, the FIBA tournament focused the global basketball community’s attention on Canada for 10 days.

According to B&M Agency, a sports marketing agency that promoted and facilitated the event, 27,000 fans came to the Meridian Centre and half a million streamed the tournament. For the final game, 4,240 fans filled the stands of the Meridian Centre, and St. Catherines will be ready to host the Canada Summer Games in 2021.

Hosting a FIBA basketball tournament on home soil was a first for Canada, and this country’s basketball fortunes will only continue to rise from here.