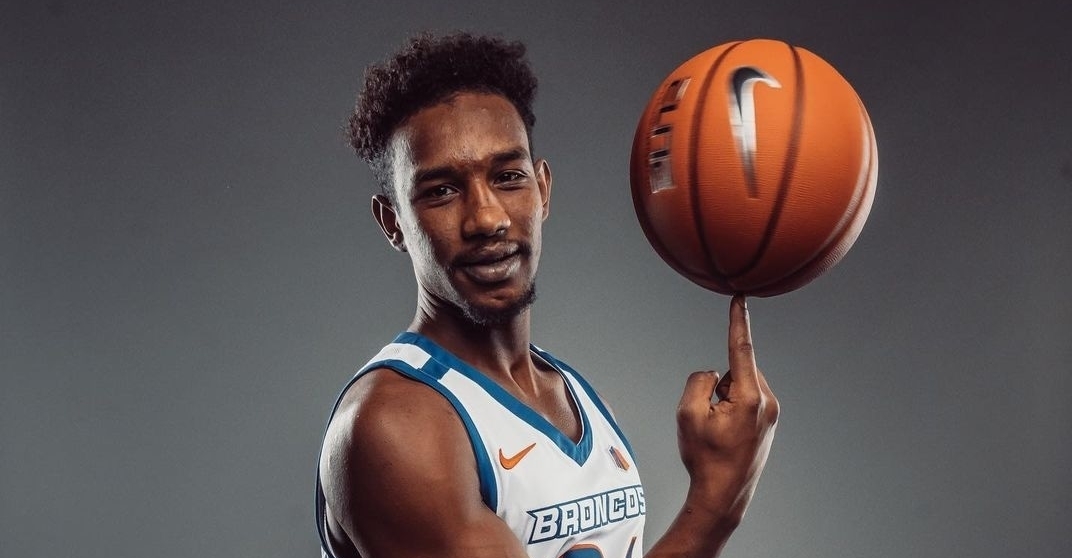 By Shaun McLeodMarch 3, 2022No Comments

Abu Kigab’s last six years in basketball have been a journey, from FIBA U19 World Cup gold medalist in 2017 with the Canadian national team to a fifth-year senior leading the Boise State Broncos to the top of the Mountain West Conference.

For Kigab, it’s all love for his time in the gem state.

“I love Boise. I’m loving the school experience, loving everything on and off the court,” said Kigab, who returned to the school after being granted an additional year of eligibility due to the COVID-19 pandemic. “I’m able to just be myself, and having that ability just makes me happy.”

Boise State athletics might be best known for their blue football fields and a historic upset over Oklahoma in the 2007 Fiesta Bowl, but they’ve begun to make their name in basketball over the past five years, opting to find players, like Kigab, through transfers. Boise State suffered a heartbreaking 59-56 in the quarter-finals of the NIT tournament last year to the eventual champions Memphis Tigers, but they’ve come back stronger and strung together 14 wins a row before losing to Wyoming on Feb. 3.

“We took it day by day, focused on the process, and didn’t worry too much about the outcome,” said Kigab, who is leading the Broncos in scoring with 13.7 points per game. “We focused on the things we can control, just let the outcome take care of itself self.”

The season is a return to normal in many ways, after a season filled with empty gyms and a schedule loaded with back-to-backs and home-and-aways against the same teams, and Kigab says that having the home crowd back has helped propel them on runs while also providing crowd noise to disrupt the other team’s momentum.

Despite the disruptions and the uncertainty of the 2020-21 season, Kigab keeps a positive view of it in hindsight, saying he felt it was a blessing even to be playing basketball during those unprecedented times, and the team felt the same. The team finished 19-9 that year, and with another year of success underway, Kigab says the sky is the limit for what this team can accomplish.

“This team puts in the work every day, and we just have to be consistent with the work,” said Kigab. “We can do some really great things, but it starts with the work and knowing who we are when we go out there and play.”

Kigab isn’t the only Canadian contributing to Boise State’s success. Six-foot-eight Winnipeg native Emmanual Akot has taken the reigns as the team’s point guard after transferring from Arizona and redshirting the 2019-20 season. “He does so much for our team… he’s an all-around problem,” said Kagib.

The two Canadians were familiar with each other from their time with the Canadian national team, and the two forged a connection quickly and Kigab says they naturally became roommates because of their shared heritage. “He’s my guy,” said Kigab with a laugh. “I can’t wait for him to keep going and take that step to the next level too.”

Kigab’s Canadian roots also come through in the form of support through his hometown of St. Catherines, Ont., who he says have supported him and had his back throughout his entire journey and that he’s proud and honoured to represent around the world.

“When I go out there, I know I’m not only playing for myself, my teammates, and coaching staff, but also playing for my city, my country, my family, so I take a lot of pride in that,” said Kigab.

As a fifth-year senior, Kigab says he’s thought about what might come next for him, but it’s something that is out of his control at this point. He notes that right now, he’s focused on things like how hard he plays, how much sleep he gets, what he eats, and his attitude. “Simple things,” he calls them, but things that he says will add up over time.  “If I can do that consistently, I think I’ll be in a really good position to be successful,” he said.

For kids looking to follow in his footsteps and play in the NCAA and possibly beyond, Kigab’s biggest piece of advice is to stay level-headed throughout the ups and downs that will come with playing the game.

“That’s the biggest thing that I’ve been through on my journey. I’ve had a lot of adversity,” said Kigab. “It’s just how you respond to that adversity. Keep battling and keep going, and you can do some great things.”

NOTES: Kigab, Akot and Boise State just claimed the school’s first Mountain West regular season championship on March 1st with a 73-67 win over Nevada in front of a record Broncos crowd. Kigab scored a team-high 23 points to go with four rebounds and three assists in 39 minutes. Akot poured in 16 points and added 3 rebounds and 3 assists in 33 minutes. The win improved the Broncos to 24-6 on the season and their chances to participate in March Madness are very likely.

Next up: At Colorado State on Saturday March 5th

The Future of Canadian Basketball in the Paint, Part 4: College Underclassmen