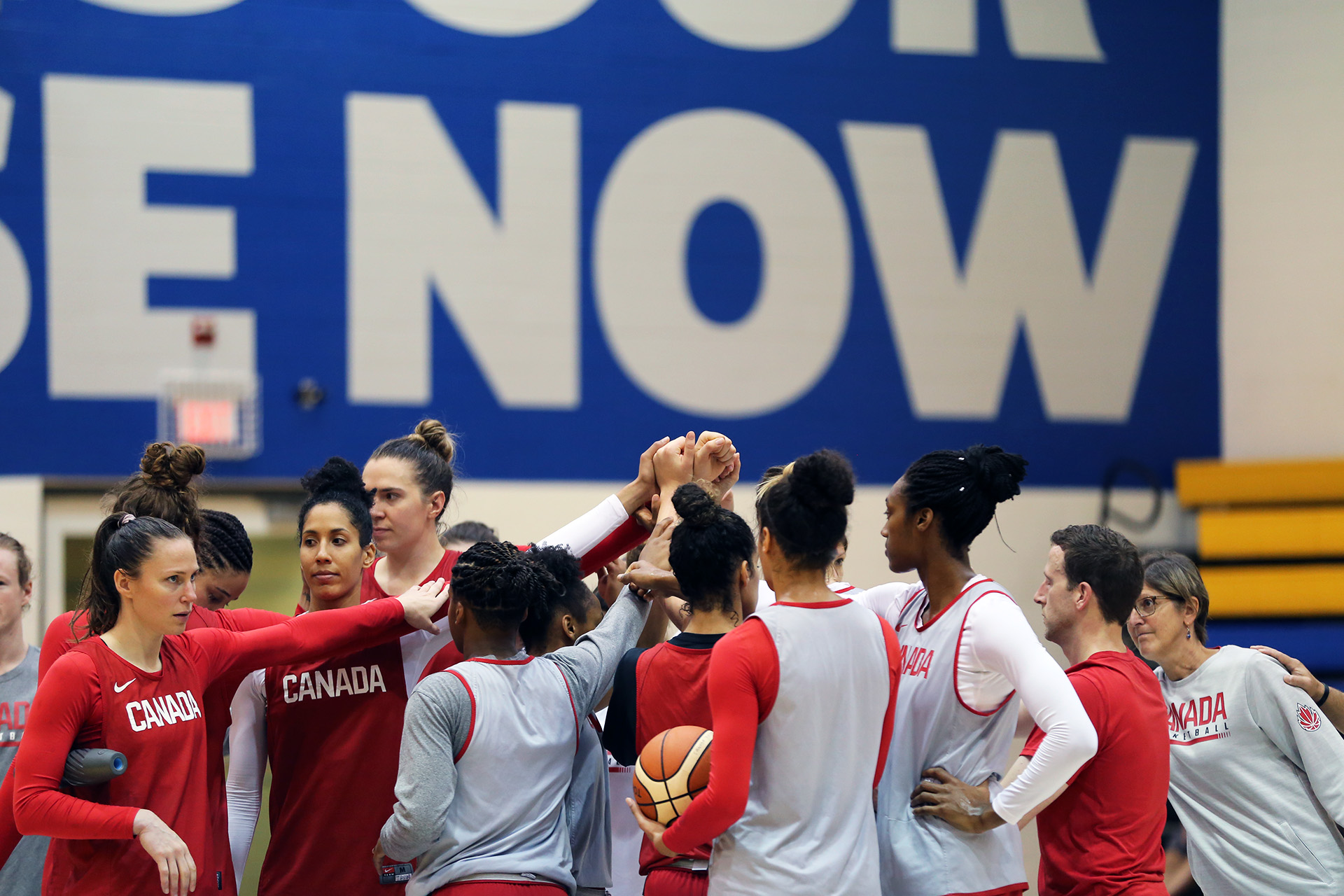 By Kajan ThiruthanikasalamSeptember 21, 2018No Comments

(Toronto, ON) In early September, the Canadian Senior Women’s National Team travelled to Webster Bank Arena in Bridgeport, CT, for a two-game exhibition series against two very tough opponents in Japan and the United States. These two games were a test to see how their speed and athleticism would match up against two powerhouse squads.

It’s safe to say that after two games, Team Canada is on the right track thus far.

Canada held a double-digit lead for much of the game against Japan and eventually won, 76-69, despite 13 made triples allowed. The women outclassed Japan on the glass (45-36) and were superior in ball movement (24-11 in assists).

Team Canada held a 40-28 lead at halftime against the top ranked Americans and even held a 10-point lead in the fourth quarter. But 15 unanswered points from the United States gave them a lead that they would not relinquish as Canada fell, 74-68.

“We know we can defend them full court. Our speed gave both teams difficulties,” women’s national head coach Lisa Thomaidis said on some of the positives from the two-game series. “And on the offensive end, we scored a lot on the first side which I didn’t think would be happening.”

Canada used their size advantage against Japan and their mental toughness was tested against the United States.

“With the exception of Ruth (Hamblin), everyone else can stretch it out to the perimeter, shoot outside shots, and handle the ball confidently,” forward Nayo Raincock-Ekunwe said.

It wasn’t all good news, however, as the Canadians suffered a huge blow to their frontcourt when Center Kayla Alexander suffered an MCL injury in the exhibition game against USA. Considering that it was her first time making the senior team on top of that made Thomaidis feel even worse when she heard the news.

“So sad for her,” Thomaidis said. “She really showed how well she can rebound and defend at that position. To lose her is a big hit and it’ll force others to step up.”

One player who stood out consistently with her inside presence was Indiana Fever power forward Natalie Achonwa, scoring in double figures in both games.

“I really picked my poison; I shot the shots that were my shots,” Achonwa said, who shot 72 per cent from the field in the two game series. “I play within my game and that (maturity) just has come with age. It’s learning what your strengths are and taking advantage of them.”

She finished with 16 points and 11 rebounds on 80 per cent shooting from the field against Japan before stuffing the stat sheet against the Americans with 10 points, six rebounds, four assists, two steals, and two blocks.

New York Liberty guard Kia Nurse led all scorers in the game against the Americans with 22 points as Team Canada led by as many as 16 in the first quarter alone. But the disparity from the free throw line (29-13) and rebounding (51-38) categories ultimately decided the game in favour of the Americans.

As training camp wound down, Raincock-Ekunwe says that despite the short training camp, the team will be ready for the world championships.

“It’s been intense and it’s been competitive,” Raincock-Ekunwe said. “It’s been short but within the week that we’ve had a training camp, we’ve gotten a lot done and pushed each other.”

Note: Alexander was replaced on the roster by Jamie Weisner-Scott, an alum of and star of Oregon State University from 2012 to 2016. Scott has already suited up for Canada and fit seamlessly with the team in Tenerife.

A SUMMER OF FIRSTS FOR WOMEN IN CANADIAN BASKETBALL

It has been an historic summer for women in Canadian basketball. The first significant event occurred in late July with an inaugural women’s game at the Nike Crown League that pitted the Toronto All Stars against the under 18 Canadian women’s team, which turned out to be a competitive treat for the fans.

“I’ve been around Crown League for a really good time and I was fortunate enough to be invited by everybody there and Nike arranging that to happen while I was back home,” Nurse said, who tipped off the game. “For women’s basketball, we need to see more leagues and places where it’s showcased.”

And just over a month ago, recently retired Team Canada player Tamara Tatham was named to the Raptors 905 coaching staff as a mentor coach, becoming the first Canadian woman to be named on the staff of an NBA G League team.

“Tamara (Tatham) would be really great at it; she’s a great player herself and has a great basketball IQ,” Nurse said. “It’ll be a lot of fun to see what happens but big props to her and thanks for putting women on the map.”

“The growth and the rise of basketball in Canada is here to stay,” Thomaidis said about the turn of events. “It’s really exploding on the scene and we have to continue to build on the momentum that we’ve generated and keep driving it forward.”

After wrapping up another exhibition series in Antibes, France, from September 15th-17th, where they beat Senegal but fell to the French and the Americans, the journey for the sixth ranked Canadians towards getting a medal at the 2018 FIBA Women’s Basketball World Cup begins on Saturday Sept. 22 against Greece in Tenerife, Spain, at 12:30 pm. EST. Games can be stream on DAZN