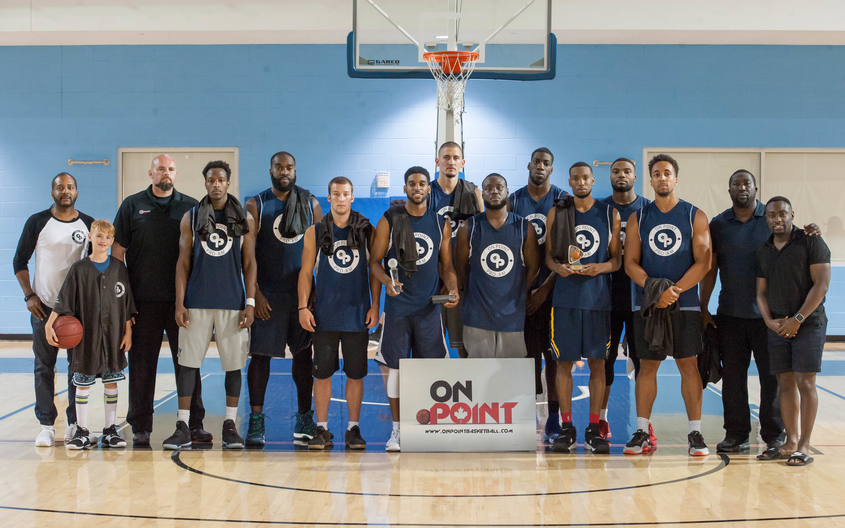 (Scarborough, ON) Toben was riding at an all time high heading into the championship game, winning three straight games after losing the first game of the season. One of those wins was against On Point, ending their unbeaten start. Toben looked to win the 2017 Inaugural On Point Summer Pro-Am. All they had to do was beat On Point again.

Team On Point, however, flipped the script this time around.

Behind 21-point performances from guards Alastair Cole and Jamal Reynolds, On Point came out on top, 80-73, in a tight back-and-forth affair to win the championship at the Toronto Pan Am Sports Centre.

Cole’s drives kept Toben’s defense at bay as he shot an efficient seven of 12 from the field, including hitting both of his triples. Reynolds’ energy on the glass along with his strong free throw shooting (9-10) proved huge for On Point.

“It’s my job,” Newby said about his facilitating. “Finding my teammates is going to help everyone play harder because they know they’re going to get the ball so they’ll end up playing harder on both ends.”

This game was so close that the final score ended up being the biggest lead of the game. Although there were just 10 lead changes and 10 ties altogether, neither team led by more than seven.

“You just got to stay with the course; they were up, we were up,” Newby said. “At the end of the day, we just knew we had to buckle down together and play hard.”

Centre Marko Curic changed the script of the game in the last two minutes, scoring nine of his 14 points during that span, including the go-ahead triple to put On Point ahead to stay. He finished with a double-double of 10 rebounds and a game-high five blocks.

“The last two minutes is crunch time,” Curic said with a grin.

The last of Curic’s five blocks was monumental as he blocked a potential game-tying triple from Toben guard Dinjyl Walker to dash any hopes of overtime.

Toben was led by Walker, who finished with 17 points, including 13 in the second half, and a team high four assists. Guard Denny McDonald had 11 points while forward Kevin Thomas provided a lift off the bench with 12 points and a team high 10 rebounds.

If there was a stat that stood out in deciding this game, it was the charity stripe as On Point shot 90 per cent (27-30). Toben, meanwhile, missed nine free throws and it proved costly; they shot 12-21 (57.8 per cent) from the free throw line.

“The guys did a great job of getting stops, making free throws, attacking the basket and getting to the line,” Cole said.

Coming into the game, it was clear that stopping Toben guard Gilbert Gyamfi was a priority. Gyamfi had 31 points the last time these two teams faced off.

This game, though? Gyamfi finished with just seven points on nine shots as the On Point defense made life difficult for him. Although Reynolds was named the Player of the Game, he had high praise for Cole.

“The game plan was to cut off his left hand,” Reynolds said. “Alastair sacrificed for the team and picked up a couple of early fouls but he kept Gilbert out of the lane and that was a key; he was the most important player for us.”

The game was tightly contested from the beginning as both teams exchanged baskets for the first 12 minutes of the game. However, Thomas’ scoring around the basket, combined with Toben’s balanced scoring, offset Gyamfi’s quiet first half as they went into the break, up five (40-35) at the half.

In the second half, On Point went on an early 7-0 run, taking a 46-43 lead and seemingly seized momentum, only for Toben to respond, setting up thrilling offensive highlights from both teams for the rest of the game.

After Toben took the lead at 71-70 on a Walker layup, Curic made the game’s biggest shot, staring down Thomas off of an inbound and draining the contested triple.

“His (Thomas) hand was up in my face but he looked kind of lazy,” Curic said. “It was an easy shot for me.”

Toben couldn’t convert on their next possession and Curic almost brought the place down with a tomahawk attempt but had it blocked by Thomas.

Toben guard Joshua Collins then attempted to save the ball but threw it right to Curic who then made a layup, putting his team up five and forcing Toben to call time out. Toben then cut the lead to two and On Point guard Juevol Myles split a pair of free throws, giving Toben the chance to tie.

Walker went off the screen and went up for the triple but Curic read the play perfectly and used his 6’10 frame to block the shot and keep it in play before getting intentionally fouled. Curic then sealed the game at the line with four straight free throws.

When asked about what the Pro Am and winning the inaugural season meant for them, Reynolds, Newby and Cole had differing perspectives.

“I really wanted to get a championship before the summer ended after reaching in other finals (OVO Bounce) and falling short,” Reynolds said. “I took it personal before the game because we lost to Toben before and we wanted to give them payback.”

“Personally, my goal for me every summer is to come back home and at least win one pro-am tournament,” Newby said. “And I got one tonight.”

“For me, this is my first time going against pros,” Cole said. “It’s just a good way to see where I’m at for the future.”

Congratulations goes out to the coaching staff:

With that, the inaugural On Point Summer League Pro Am ends with a resounding success. See you all next year!