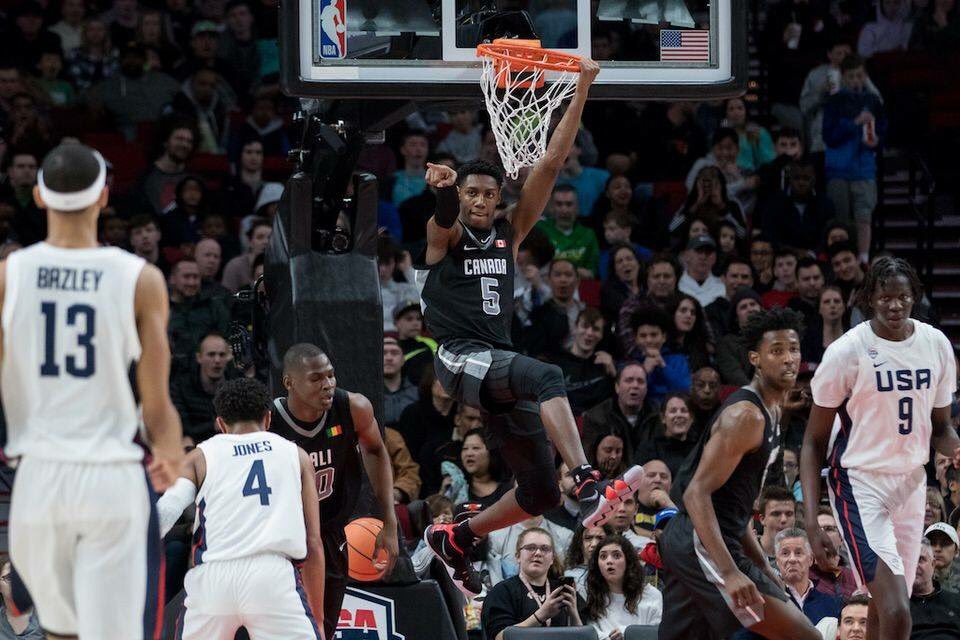 By Connor WilliamsonApril 18, 2018No Comments

(Portland Oregon) In what was a tight game for three quarters, the World team beat the USA Friday night, 89-76. After being down three points entering the 4th quarter, the World outscored the USA 28-12 to finish the game, behind strong play from Andrew Nembhard, Jaylen Hoard, Charles Bassey, and of course RJ Barrett who scored a game-high 20pts & was named MVP. There was a certain malaise to the USA team, which missed four players (Louis King, Zion Williamson, Keldon Johnson, and Romeo Langford), that did not burn off as the game became more competitive. While Bol Bol had a banner night as a shot blocker (6 blocks) the World team was able to get looks at the basket, thanks to the team’s share-the-ball ethos. Good cuts were rewarded with good passes, as World team wings caught USA defenders ball watching on a number of occasions for back door cuts. World team Coach Roy Rana highlighted Barrett’s unselfishness after the game, explaining that it set the tone for the whole team and its style of play.

The USA’s ball watching, in addition to the aggressive inside presences of Hoard, Bassey, and in short minutes Kofi Cockburn hurt them down the stretch. As Bol slid over to contest shots at the rim, the USA did a poor job of helping the helper, leading to 21 offensive rebounds for the World Team, compared to USA’s 8 offensive boards. Bassey in particular feasted on Bol’s vacated post, with 5 offensive rebounds of his own, on his way to a World team record 16 rebounds. Hoard and Barrett also got in on the action, crashing the glass from the perimeter, pulling down 7 and 2 of their team’s misses respectively. In many ways, this opportunism defined the game for the World team in a game where the talent was fairly equal.

The Canadian cohort played extremely well in the contest, with Barrett leading the World’s high-energy 4th quarter takeover. In the first three minutes, he collected a couple of steals and assisted or scored on all four World team scores, totalling 10 points. That turned a three point deficit into a five point lead, from which the World team never looked back. In the first half, Nembhard connected with Barrett for two crowd pleasing alley-oop dunks, showing off Nembard’s vision and passing ability and Barrett’s cutting and body control. Barrett later returned the favor for his countryman and high school teammate, finding Nembhard with a hit ahead for a bucket. Ignas Brazdeikis also drew “oohs” from the crowd by stepping through a double team on a slashing drive, turning a USA stop into a World basket. In maybe the most impressive play of the game, Nembhard saved an offensive rebound from going out of bounds with a behind the back pass to Hoard for an easy dunk.

Assorted Scouting Highlights from the Canadians

The World Select Team outrebounded the US 60-42 and tallied 23 assists to the Team USA’s 18 helpers.

The all-time Nike Hoop Summit series now stands at 14-7 in the USA’s favour.

Next up for Barrett and Nembhard is the Signature All-Canadian Showcase at the Hershey Centre in Mississauga, On on Monday April 23rd, 2018. It will be the last High School game for both players.