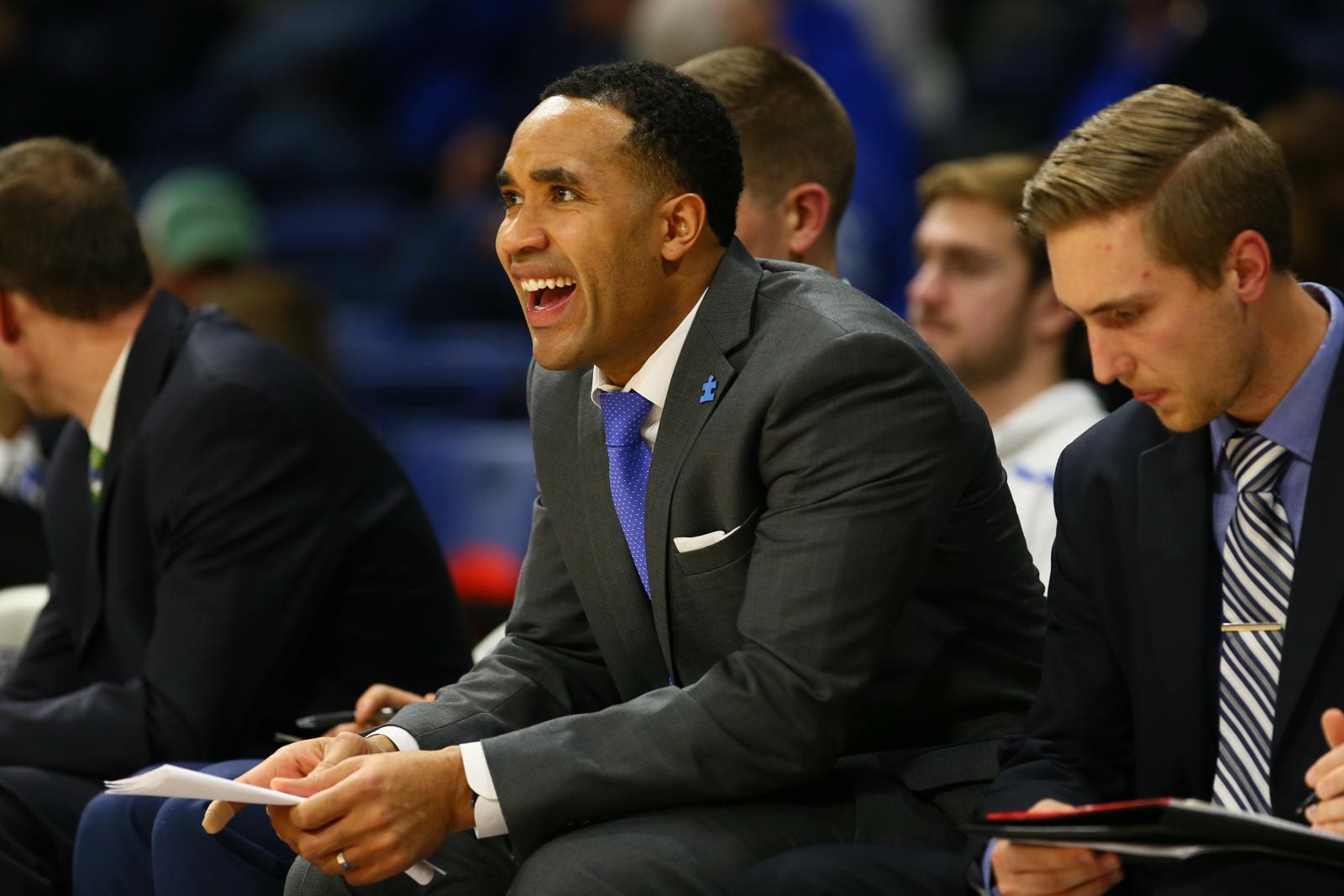 Oftentimes different names mean different things depending on where you’re from. In Canada, say the name Drake and you’re instantly in the middle of a rap conversation, but if you’re in the US (especially the Midwest) and say Drake, people are likely going to get a different idea: they’ll be talking about Drake University.

In a basketball sense, the Drake Bulldogs are having one of their best runs in school history. The mid-major program from the Missouri Valley Conference has been making waves in college basketball circles over the past three years, and this season the hype was rewarded with a trip to the NCAA Tournament and a win in the First Four. They quickly became a household name across the country after holding the nation’s longest winning streak of 18 games this past year, and have even made their way up into Canadian basketball conversations. The interesting thing is that this current Bulldog squad actually has multiple ties back to Canada, with the most notable being from the coaching past of Drake assistant coach Larry Blunt.

When it comes to coaching, many say that you’re either raised with that innate desire to lead, or you’re attracted to it later on in life, and for Coach Blunt, the former certainly reigns true.

“My father was a coach, so it was something that was dear to my heart”, said Blunt. “My mother was a principle, so growing up in that educational background made it something I always had interest in.”

Blunt wasn’t born or raised in Canada, rather in Virginia, with a passion for football and sports in general. In the offseason though, he found basketball as his true calling.

“I played Division I college football, but growing up in Virginia you play multiple sports.”, said Blunt. “When college football ended there was always a void, no spring or summer football, and so I volunteered at a local high school, and that’s when I realized [coaching] was something that I had serious interest in doing.”

That coaching interest eventually led Blunt to a multitude of positions including D III and D II stints as both an assistant and head coach. The road was lengthy, but proved valuable in terms of experience, and eventually opened the doors to a new opportunity in a different country: a head coaching gig with the Oshawa Power of the National Basketball League of Canada (NBL Canada).

“I was fortunate to have a relationship with Robert Brickey who held a position in the front office of the Oshawa Power.”, said Blunt on his original tie to the position. “I loved [coaching in Oshawa]. It was a great experience, it got my foot in the door in Canada, and I developed some great relationships. I actually lived with Cory Joseph’s aunt, Merin, when I first moved to Canada. Without her letting me stay with them I don’t think any of this success could have been possible. I will forever be grateful to her and her family”.

That experience of moving to a new country is always difficult, but the typical Canadian hospitality eased the transition, and within a few years, Blunt was instrumental in the creation of Orangeville Prep at the Athlete Institute in Mono, ON. When you hear that name now, it comes with a certain prestige, as in 2021 the program has seen a number of high-profile alumni such as Jamal Murray, Luguentz Dort, Thon Maker and more ascend and achieve much success at the NBA level. But when Blunt first arrived in Mono, the level of respect the institute now receives was not quite at the same peak.

“When we started Orangeville Prep I remember having to beg NCAA coaches to come across the border.”, said Blunt. “We had 10 Division I players, you can go through the whole list, all 10 guys signed a scholarship, and we were begging for coaches to come evaluate guys. Compare it to my third year…we didn’t have enough chairs to accommodate all of these coaches trying to find the next talent.”

Both figuratively and literally, people were starting to tune in, and by his third season with the program, Blunt and several others helped build what is now one of the most prestigious youth basketball teams in the country, let alone North America. That multi-year experience north of the border gave Blunt an interesting look at how Canadian basketball in general has grown in such a short span of time.

When asked about how he would describe Canadian basketball currently, Blunt said that it’s a secret that is becoming not so secretive, and that’s the exact same way he described his post-Orangeville-hire and current job as the assistant coach for Drake.

“Drake is one of the world’s best kept secrets, but I think the secret is getting out; I think it’s the same with Canada.”, claimed Blunt. “People have taken notice and are aware of all the Canadian talent, and it’s just the tip of the iceberg. People are playing basketball at an earlier age, and the infrastructure continues to grow. So many people are helping these young kids use our game to create opportunities for a free education. Many rosters have, and many programs will continue to seek out Canadian talent to help improve their roster.”

As people take note of the basketball prowess from the north, people are taking notice of the Drake Bulldogs as well, and Coach Blunt alongside the rest of what is a youthful and energetic coaching staff are really beginning to make waves. The Bulldogs had one of their best seasons in school history finishing with a 26-4 overall record, alongside a 15-3 showing in MVC conference play. They lost in the finals of the conference tournament against an extremely tough and postseason-ready Loyola-Chicago team, and got selected into March Madness as a member of the First Four. 2021 was only the 5th time in school history that a Drake team was able to get to the big dance, and this group was the first to do it since 2008.

This past season solidified the fact that we are experiencing a special run of Drake men’s basketball, but in his three years of experience as an assistant, Blunt says this program has been on track for this sort of success for way longer than the past 12 months.

“I think because of the tournament success we are being recognized, but our last three years have been a great ride.”, said Blunt. “We’ve won 20 games back-to-back-to-back for only the second time in school history. This is one of the best runs our school has had, and our passionate fan base continues to grow.”

Another intriguing piece of the parallels between the Drake Bulldogs and Canada is that Coach Blunt isn’t the only one bringing a Canadian past to the table. Toronto native Okay Djamgouz (London Basketball Academy) is in his second year at Drake as a redshirt freshman, and made 19 appearances for the team this season.

Djamgouz averaged 4.2 minutes-per-game, but had big moments when he was given the chance. A great example is when he helped the Bulldogs defeat Kansas State earlier in the year when he hit a big 3 in the first half. As well, Djamgouz received a player of the game award earlier in the season after impressively scoring 12 points in 11 minutes. The only thing missing now for Djamgouz is opportunity, but with Drake’s rotation consisting of mostly juniors and seniors, the learning experience has been just as valuable as court-time for Djamgouz. Moving forward, Blunt feels that Djamgouz will expand his role with this Drake team as he continues to develop, especially considering the way the 6’5” guard is able to shoot the basketball.

“Okay has something we value and that’s shot making, especially from 3.”, stated Blunt. “A lot of people don’t know that he played his entire first semester at 17 years old, so it’s been a great experience for him to learn from these older guys. He has days in practice where he shows flashes and makes shots at a really high level. He has developed his game both mentally and physically, and he is one of the hardest workers on our team. A lot of it comes down now to opportunity which should come as he continues to improve and develop.”

The future looks bright for Djamgouz just as it looks bright for Drake, and for Canadian basketball as a whole. Both Drake University and Canada Basketball have long been underdogs, slept on for decades without much in the way of media attention and opportunity, and only now are both beginning to gain traction and finally find the respect they thoroughly deserve.

The golden era of Bulldogs basketball is well underway, and through assistant coach Larry Blunt, you can find northern fingerprints all over the program, as the words Drake and Canada manage to find themselves in the same breath once again.