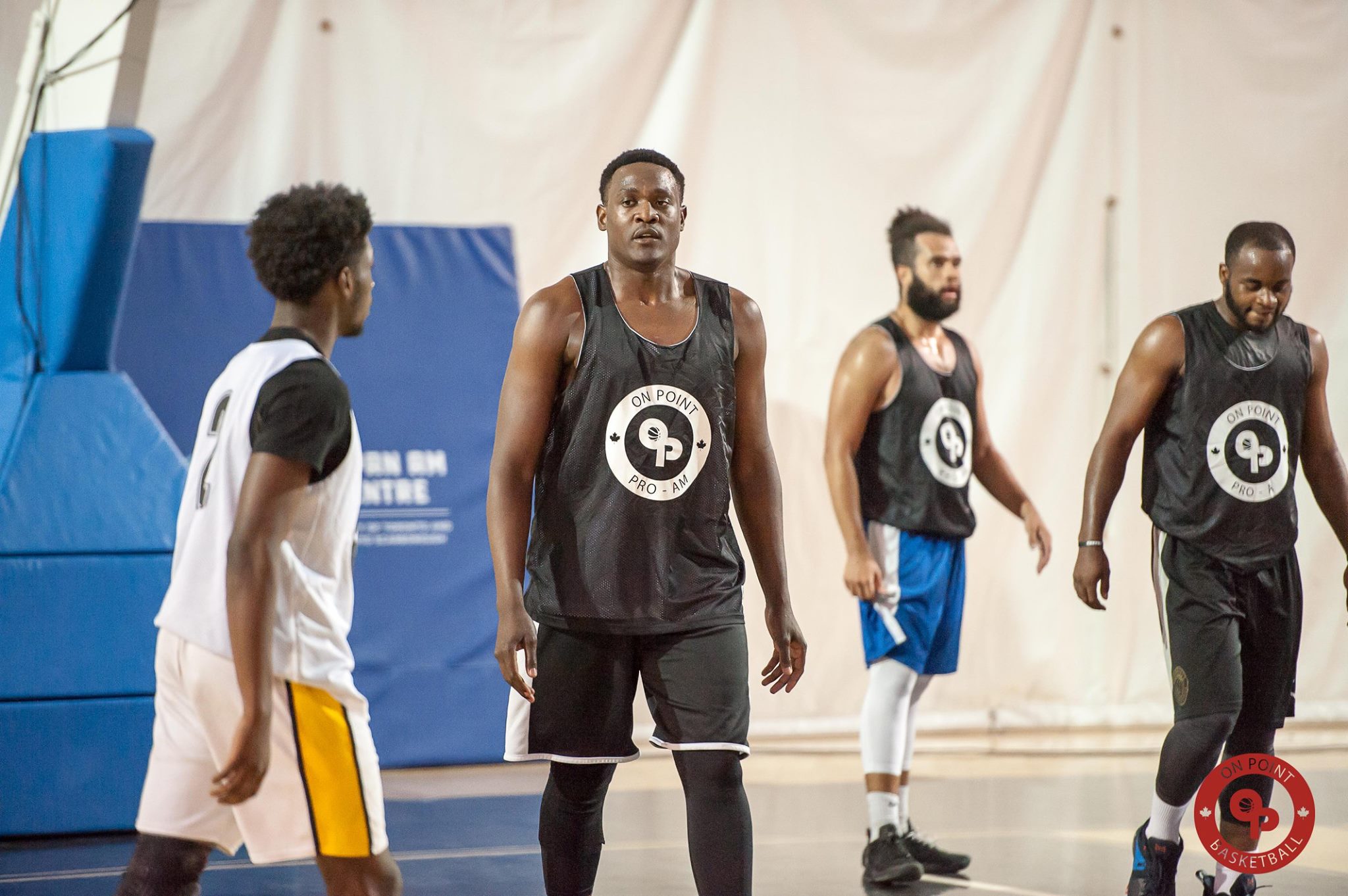 By Kajan ThiruthanikasalamAugust 6, 2018No Comments

Season 2 of the On Point Summer League Pro-Am continued Wednesday August 25th when the league semifinals took place. On Point and Toben were looking to make it to the championship game for the second year in a row while X-Men and M.A.D.E. looked to change that.

Both games saw early double-digit leads evaporate quickly. However, one team completed the comeback and another one recovered from a potentially disastrous outcome.

Who were the teams that went through? Time to find out.

ON POINT SURVIVES SCARE AGAINST X-MEN

This was turning out perfectly for Team On Point heading into this game as stats keeper Kaelan Rose was forced into action for a depleted team. This time, it was for X-Men. Meanwhile, On Point went nine deep, including Kenny Ejim who was back in action for the defending champions.

On Point did pull off the win but not without a major scare early on.

Team On Point, behind 20 points from Alex Johnson, overcame an early 14 point first half deficit to defeat X-Men, 85-78, to advance to the championship game for the second straight year.

Johnson, AKA Superman, hit six triples and had four assists in total. Many of those threes came at critical moments to stem X-Men’s momentum, to the delight and roaring cheers of his cheering section, particularly from his wife, Brey Johnson (nee Dorsett).

“I love my wife; she just brings the energy. She’s the yin to my yang,” Johnson said, smiling. “She just does a great job of motivating and keeping me focused. I tip my hat off to her.”

Alex Johnson of Team On Point

Three other players joined Johnson in double digit scoring. Nigel Tyghter had 12 points while Jamal Reynolds had 11 points and dished out a game-high seven assists. Devin Johnson dropped 10 points, including eight in a row during the first half that brought On Point back into the game.

“He was the one that sparked the run,” Johnson said about Devin Johnson’s run. “Sometimes the starters ain’t getting it done and you need a guy like him who can come in and do his job.”

The loss spoiled an incredible performance from Kevon Parchment, who dropped a game high 35 points, along with five assists, but was slowed down at crucial moments late in the game by Reynolds.

“Jamal’s an underrated defender; he’s 6’5” and he’s long and lanky. What we wanted to do was put length on him (Parchment),” Johnson said. “So we just tried to make it tough and give him a different look.”

Rose had another solid effort, scoring 13 points while Nevell Provo had 12 points and Tyrell Leotaud chipped in with 10 points in the loss.

X-Men started off the game on a 19-5 run and led by 14 another time (24-10). But On Point finally woke up and got going, chipping away at the deficit until Alex’s second triple gave them the lead for good.

On Point went into the break, up 40-39, despite 13 first half points from Parchment.

Alex Johnson and Reynolds started the second half with steals and points at the rim as On Point eventually extended their lead to as many as nine. But the feisty X-Men, missing key contributors Jayden Frederick and Davion Parnsalu, fought back and cut the lead down to one (73-72) after a fast break jam from Parchment.

However, Tyghter’s free throw line jumper sparked seven straight points from On Point as they finally put away X-Men and avoided a major upset. But, according to “Superman” Johnson, On Point needs to take this game as a major wakeup call.

“This is the second game that we’ve just came into it and thought we were going to win just like that without playing basketball,” Johnson said of the close call. “The final is not going to be one of those games when you could just walk in and think that we could just win. We’ve got to play basketball.”

Team Toben could not have started off a game any better as they scored the first 11 points of the game. However, with a team as talented as M.A.D.E. is, leads will evaporate quickly and it did, looking like a repeat of the first game.

“A team that good will never stay down for long,” Toben guard Josh Collins said. “We knew that they were going to make a run. For our team, it was important for us to move the ball and that way, everybody is engaged with the game.”

Unlike the last game, however, Toben got it back together and seized a huge victory.

Three players scored over 20 points for Toben, led by Shane Osayande’s game-high 21 points and 12 rebounds, as they beat M.A.D.E., 85-81, to advance to the championship game for the second year in a row.

Collins and Dinjiyl Walker each had 20 points. Collins also had eight rebounds and a team-high eight assists.

“Just try to keep the tempo of the game in our favour,” Collins said about his playmaking. “A lot of times, they went under so I had to shoot it just to keep them honest. After you keep them honest, other guys are open and they made shots.”

“They’re both tremendous for us. Both are two of the best guards in Canada and it’s great to have them on the Toben team,” said Osayande about Collins and Walker. “You’ve seen what they did and look forward to more from them.”

Osayande made his presence felt at the rim on both ends, getting easy baskets and altering opponents at the rim.

“I was just seeing an opportunity at hand,” Osayande said of his performance. “M.A.D.E. have a great team but we wanted to get back to the finals so I was trying to do anything that I could to help my team do that.”

“Shane is doing what Shane does; he’s big at the rim and it helps when we send guys to the rim and not be worried knowing there’s always going to be help there,” Collins said about Osayande’s performance. “He changed a lot of shots.”

MiKyle McIntosh led M.A.D.E. with 20 points while Duane Notice had a triple-double, with 19 points, 11 rebounds, and a game high 10 assists. Fresh off an historic performance in his last game, Jaylen Babb-Harrison scored 14 points while Darnell Landon had 12 points in the loss.

“With me, James (Siakam) and Liam Phillip, we’ve got guys that can rebound and play inside-out; we just tried to take advantage of that,” Osayande said about the rebounding edge. “Just try to crash the glass offensively and defensively.

Despite the slow start, M.A.D.E. fought all the way back to take the lead and held a 39-35 edge with the first half winding down. But Toben responded with seven unanswered points to end the first half, capped off by a jam from Osayande, as they took a 42-39 lead at the break.

M.A.D.E. then retook the lead and held a five-point lead (66-61) midway through the second half. But Toben, once again, responded with 11 straight points this time to take back the lead for good as M.A.D.E. only got as close as four the rest of the way.

This sets up a rematch of last year’s championship game on August 8 to determine who wins Season 2 of the On Point Pro-Am. Like last year, Toben comes in with a lot of momentum but the players know that it does not mean anything when tip off starts.

“We just have to play 36 minutes of basketball,” Osayande said about playing On Point in the final. “We see them all around Toronto and we know what they’re capable of doing. Just focusing on locking in and we’ll come out victorious if we do that.”

“We can only control what we can control,” Collins said. “But if we play our game, move the ball, and play good defence like we did today, we’ve got a good chance to win it as much as they do.”

Team On Point back in the final

Top seeded Toben and second seeded On Point meet in the finals for the second year in a row. The first Pro-Am ended with On Point taking the title with a 78-73 win.

A full preview of the finals will come soon.