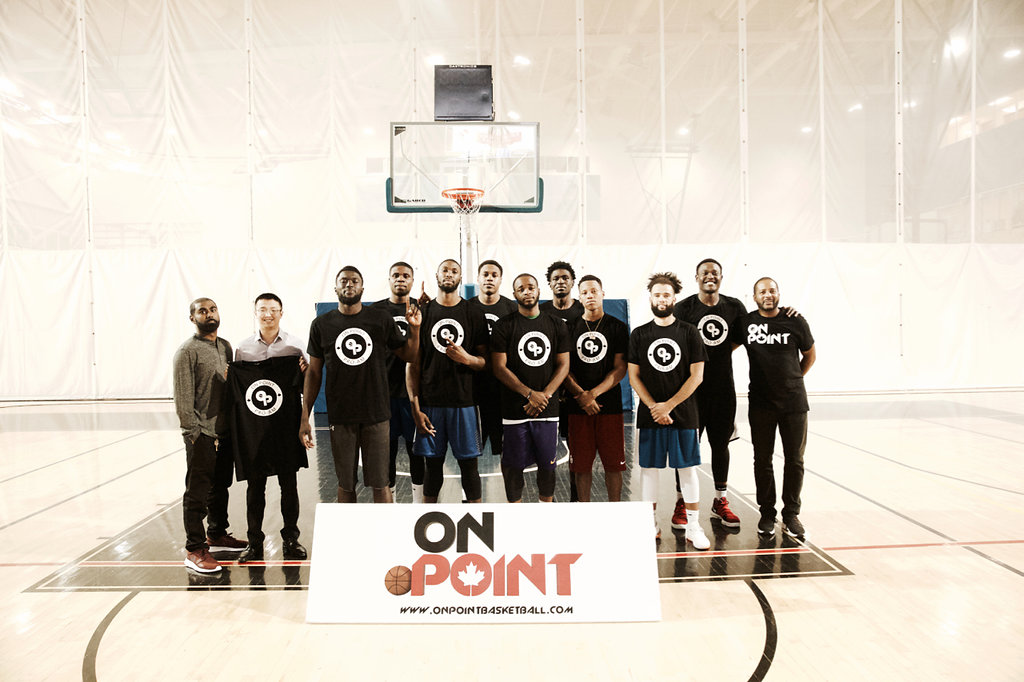 By Kajan ThiruthanikasalamAugust 18, 2018No Comments

It was an exciting end to what was a successful second season at the On Point Summer League Pro-Am. Toben and On Point faced off in the championship game for the second straight year.

For Toben, the task was simple. Avenge last year’s defeat. For On Point, it was to go back to back.

Toben had recent success against On Point in the last three weeks, winning during the regular season and beating them in the MCup basketball tournament Men’s Elite Division final. They came into this game with a lot of momentum but then again, that was the same story last year.

Except there was one thing was different this year then from last year. Toben took advantage of that momentum Wednesday night and pulled off the win.

In what was a high scoring affair, Toben defeated On Point, 114-111, to win their first On Point Pro-Am championship at the Toronto Pan Am Sports Centre. Gilbert Gyamfi and Alex Johnson were named Game MVPs for their respective teams while Josh Collins took home Season MVP.

A lot else happened during a historic and eventful night so it’s only right to break this down.

Gilbert Gyamfi had an incredible On Point Pro-Am season last year up until the championship game, when he scored just five points in that crucial game. It’s safe to say that this year, he put that behind him and in a massive way.

Gyamfi led a balanced offensive attack from Toben with 22 points and was the team’s game MVP and Eye Studio TO Performer; hitting a team high three triples.

“Last year, they (On Point) came to the finals set to stop me from getting into the paint,” Gyamfi said about the change from last to this year. “I think this year, they weren’t focused on me; they were focused on Josh (Collins) and Dinjyl (Walker). It takes the pressure off of me and it’s only a matter of time before I get going.

15 of his points came in the second half, including some key baskets to keep On Point at bay.

“I wasn’t surprised,” Gyamfi said when asked about the wide-open looks he got. “I was in a slump for the last couple of weeks so they (On Point) weren’t respecting me and were focused on others.”

Gyamfi says the game, for Toben, came down to being patient on offense and keeping it simple.

“Starting the game, I didn’t think we did that,” Gyamfi said. “But for the majority of the second half, we made it simple and people got hot. It puts the opponent in a tough position.”

After a championship game last year that ended in heartbreak for Gyamfi, he finally got vengeance in two ways – with a great scoring night and a title.

SUPERMAN LIVES UP TO HIS NICKNAME

Move out of the way, Jaylen Babb-Harrison. There’s a new record holder in the scoring column now.

It is bittersweet with the final score not in On Point’s favour but was it ever a performance for the ages as Alex “Superman” Johnson dropped a Pro-Am all-time high of 43 points.

Johnson had a chance to tie the game with an attempt from beyond half court but it fell short. Despite the result not being what he wanted at the end of it all, Johnson admitted that it was a game for the ages for him.

“It’s up there,” Johnson said when asked where this performance would rank for him personally. “I’m a pass first point guard so I just go off the vibe of the game. Today, I was hitting and I took full advantage of that.”

It is the first time that a player has dropped 40 or more points in Pro-Am history. Johnson’s jump shot was especially money as he hit a whopping 10 triples, many of them off the dribble.

He says that this performance validates his work in the offseason as teams can no longer go under the screen on him and felt disrespected when he was left open from the top.

“Most definitely,” Johnson said. “That’s been the scouting report on me my whole life. I’ve been working really hard this offseason to make people pay for going under ball screens.”

It was the first summer back in Toronto for Johnson in quite a while as he spent the last two out in Hong Kong. Along with playing in the On Point Pro-Am, the point guard also won a Crown League title as a member of 1 Love T.O.

Cheering from the sidelines was a familiar face in Johnson’s wife Brey Dorsett, who was mostly in attendance throughout this season. Brey also played in the first ever women’s game at this year’s Crown League.

As the summer winds down, the couple looks to play professional basketball overseas. This time, however, they look to be closer to each other.

“She has a couple of offers to go to Romania or France; we’re just waiting to see what best fits us,” Johnson said of what’s next this upcoming season for the both of them. “Last season, we were away from each other a lot so this year, we’re trying to be together.”

A lot of momentum is in Superman’s direction right now, especially after the performance of a lifetime.

Alex Johnson of On Point

All season long, there were many players that stepped up when necessary. For the title game, when it mattered most, it showed once again.

No player on Toben scored more than the top two scorers from On Point. They, however, more than made up for it with six players scoring in double figures. Also, everyone that played scored.

“Toben has tried to emphasize that (balance) all season,” Gyamfi said of the team effort. “Everyone on our team is a threat and are capable of having a great night. It’s easier that way, especially when it comes to scoring.”

Gyamfi had a team high 22 points while Dinjyl Walker had 17 and Anthony Ottley Jr. had 16. Collins (more on him later), Shane Osayande and James Siakam all dropped 15 points to round off Toben’s double digit scorers.

“The balance from this team is key for us to win games,” Collins said. “If we want to be successful, we’ve got to play as a team. Everybody contributes so it’s always great.”

And speaking about the floor general….

As mentioned in numerous occasions, anybody on Toben can go off on any given night.

But make no mistake about this. There really was not a doubt who this season’s MVP would be, especially considering his leadership and poise as a point guard on the offensive end.

Toben’s Josh Collins was named On Point Pro-Am MVP and Eye Studio TO Performer as he finished the title game with 15 points, six rebounds, and a game-high eight assists.

“Honoured to be named MVP,” Collins said with a hint of surprise post-game. “I’m just happy and thrilled to be standing at the top at the end of the season.”

It marks consecutive years that a point guard was named Season MVP, following On Point’s Jabs Newby from last year. Collins attributed his presence at the point to experience.

“Toben is very much a team where we’ve stayed together so I’ve kind of known how everyone plays and knowing the guys is half the battle when it comes to controlling the tempo,” Collins said. “I attribute that to being a nice, cohesive team.”

Like Gyamfi, Collins experienced heartbreak as they fell short to On Point in the title game last season. So it’s obvious to him that this win means that much more.

Collins credited his team for playing a better game this time around but also shouted out On Point for a hard fought battle.

“When two teams go at it like that and it’s a one-game series, it could go either way,” Collins said. “It comes down to a few plays and key stops. Luckily, for today, we were able to get those.”

Collins was high on praise when it came to the second season of the On Point Pro-Am, in general. He says it’ll only grow bigger from here on out with attention and more guys coming back to play.

“I think it was really good just because it’s been in Scarborough the whole time; there’s not really much of a pro league in Scarborough,” Collins said about the growth of the Pro-Am. “Two successful years of high, competitive basketball means that for next year, it’ll be even better.”

“And that’s all you can really ask for.”

Nigel Tyghter of On Point

TAKEAWAYS FROM THE FINALS

ON BEHALF OF TEAM ON POINT, THANK YOU FOR COMING OUT TO A SUCCESSFUL SECOND SEASON OF THE ON POINT SUMMER PRO-AM. SEE YOU NEXT YEAR!