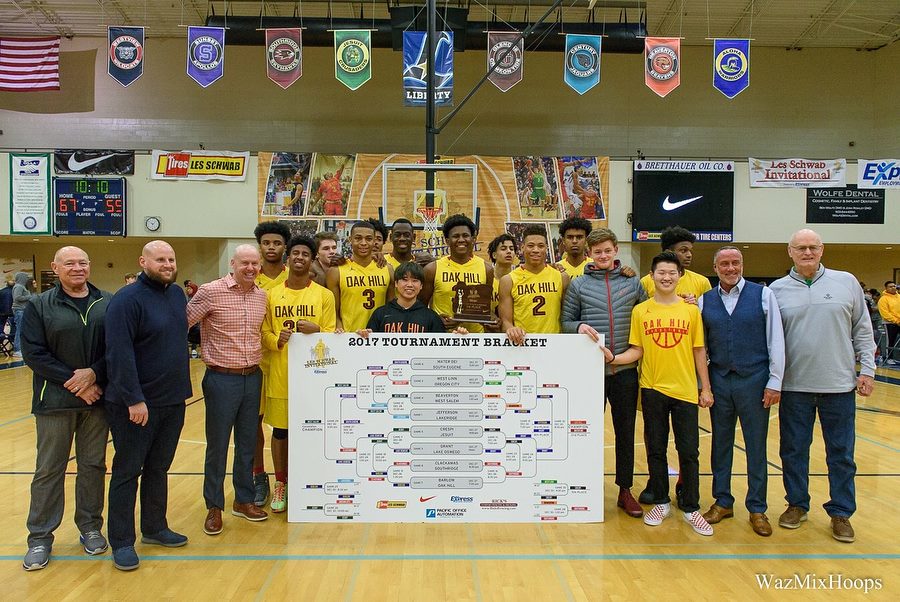 By Conrad ChowJanuary 4, 2018No Comments

(HILLSBORO, OR) — Carmelo Anthony, Kevin Durant, Ben Simmons, Michael Porter Jr. – those are just a few eye-popping names from distinct eras of basketball supremacy who have graced the hardwood at Liberty High School, home of the Les Schwab Invitational (LSI) in Oregon. One of the top high school holiday basketball tournaments in North America, the LSI features both in-state and national teams. Since its inception 22 years ago, this hoops competition has become a routine recruiting ground for local NCAA Div. I, Div. II, Div. III, and JUCO coaches.

For the seventh time in tournament history, the Oak Hill Academy Warriors led by Keldon Johnson, took home the championship. Oak Hill cruised past local Oregon teams in Barlow, Southridge, and Grant en-route to a battle with California’s Mater Dei Monarchs. Mater Dei, which had lost 5-star recruit Bol Bol and dynamic guard P.J. Fuller via transfers had led early, but Oak Hill came out on top with a 67-55 win.

Top-down, Oak Hill’s roster is loaded with a talented starting lineup consisting of players who have signed with Div. I schools including Florida, Kansas, Kentucky, and Oregon in the class of 2018.

The team’s depth extends to its underclassmen, high school sophomores who have been on the radar of various college coaches for quite some time.

Among those players is 6’9” forward Josh Hemmings, who hails from Toronto, Canada. Hemmings and Lindell Wigginton are two of the Canadians who played on this prestigious team during the 2016-17 season. The latter has gone off to Iowa State and has averaged 15.2 points, 4.5 rebounds, and 2.5 assists so far in his freshman year.

Hemmings, in his second season with Oak Hill, appreciates the time he and Wigginton had together as teammates.

“It was a great opportunity to learn from someone who is experienced,” Hemmings said. “He’s doing big things at Iowa State and I look to just keep going and following his image.”

As for the team, the Warriors obviously have high aspirations. They dominated at the Chick-Fil-A Classic before arriving at Hillsboro, Oregon. The goal is to stay undefeated and ultimately win the 2018 Dicks Nationals, an objective echoed by tournament MVP Keldon Johnson.

In early October, Canada Basketball held its Junior National Open ID Camp in Toronto, Canada. This event provided Hemmings the opportunity to see his friends and have family members come out and watch him compete against the country’s most elite.

“It was great playing with guys I haven’t seen in a while and playing for Canada,” he said.

The camp was a primer in preparation for this summer’s FIBA U18 Americas in St. Catharines, Ontario and FIBA U17 World Cup in Argentina – two tournaments we could potentially see Hemmings participate in.

Being on such a star-studded squad, minutes can be hard to come by. In limited time, Hemmings was impressive and efficient at the LSI. The lefty averaged 4.0 points, 3.7 rebounds in 5.7 minutes during three contests on 50.0% shooting from the field. His length stood out as well as an ability to spread the floor, showcase constant activity on the glass, and take high-percentage shots within the offense.

For young players, being mentally and physically prepared is imperative to production when called upon in a game. “It’s hard. You got to keep loose because you get tight sometimes,” said Hemmings. “When you get on, you got to just be ready, be aggressive, and keep doing what you’re doing on the court.”

Looking forward, Hemmings is eager to build off of his current college offers. “I have UCLA so far, Tulane, USC, Cincinnati, and Georgia Tech. Those are my top five schools so far,” he said.

“I want to develop my game so that next year I can be a bigger part of the team. And I just want to keep getting better.”

“Culture is a popular word this day and age, but the biggest thing about coaching high school kids is letting them know that you care about them and being present enough in their lives so that you can really be attentive to what they have to say.”