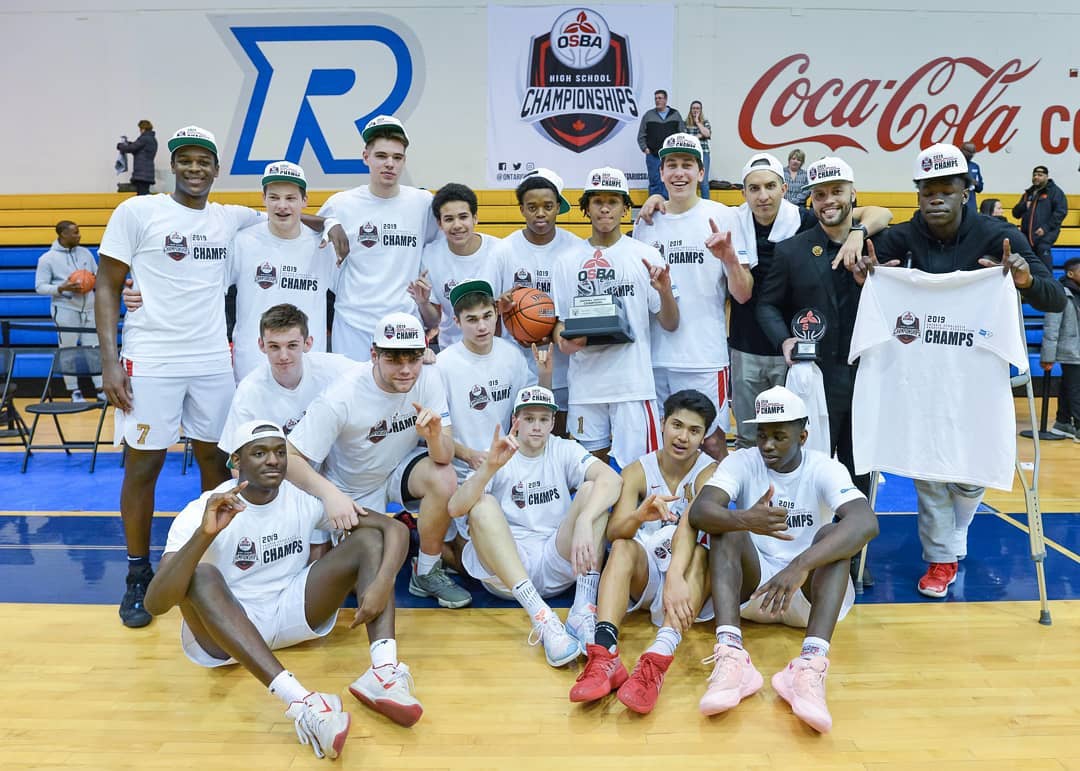 (Toronto, On) The father of the men’s OSBA Finals MVP stood to the side, hidden away from all the camera flashes and media attention being showered on his son. Despite his son winning a second OSBA championship, his father’s smile barely broke through his stoicism.

“My dad used to teach me a lot and he coached me until Grade 10. He taught me everything I know and if it wasn’t for him, I wouldn’t be anywhere,” said OSBA Finals MVP Avan Nava, praising his father’s role in his basketball development.

In last year’s finals, the TRC Wolfpack guard was but a mere pivotal role player, hitting four out of his six three-point shots. But this year, he transformed into a true leader of TRC’s offense.

“I just put the work in, put the time in,” explained a humble Nava about what he did to improve. “I practiced going off ball screens, practiced my passing, everything that turns me into a better player, so I could have a bigger role.”

In the championship game, TRC was missing its star player and University of San Diego commit Sabry Philip due to injury. But in the face of adversity, TRC’s collective strength only grew stronger.

The first quarter was mostly neck-and-neck, but TRC established its dominance at the end of the second half leading 46-35. From that point on, the scoring gap never closed.

Throughout the second and third quarters, Nava and Lorenzo Downey bamboozled Thornlea’s defence. Late in the second quarter, Nava pushed the lead back up to 11 points after Downey’s back-to-back threes. At the end of the third quarter, TRC’s Viktor Nausedas threw down an emphatic two-handed dunk, putting his team up by 14 points.

Before the fourth quarter started, TRC had sucked all hopes of a Thornlea comeback. Though Thunder’s raucous fans made their presence known, TRC was up 16 points leading 83-67 with 4:29 left in the fourth quarter. The game was over and the Wolfpack became back-to-back champions.

Avan Nava was a man on a mission, staring down every player he scored on. He finished the game with 24 points, five assists and drew six fouls. He was guarded by prospective Virginia Tech commit Cashius McNeilly, but drove to the rim fearlessly and demonstrated an arsenal of offensive moves. Despite his lack of size, he drove and finished at the basket with ease. Even when his shots were not dropping, he continued to attack without losing intensity. When the option to drive became unavailable, he pulled up for the mid-range, shot a fadeaway, tossed up a floater or hit the three. He showed ball control and passing ability to create for others, especially by making defenders collapse on him.

Lorenzo Downey made a name for himself as a prolific scorer in the championship game. He is still in Grade 11 and can do everything offensively. He has the elite athleticism that will solicit high major offers. Just as he had done the night before, by hitting the game-changing layup against Ridley College, Downey showed he can penetrate the paint at will and finish easily. With 4:35 left in the third quarter, he had a quick shot fake from the perimeter, took two dribbles and threw down a powerful dunk. He also went 5-for-9 from downtown, hitting three of them in the third quarter. When the defence played up on him after his fifth made three, he opened up his own driving lane with his lighting quick handles and first step.

While Downey used his quickness and speed to get to the rim, Viktor Nausedas used his strength. He had a couple of great drives from the perimeter and drew fouls, going to the charity stripe eight times. He had some highlight reel dunks throughout the game: a two-handed throwdown and a nail-in-the-coffin, game-ending windmill dunk. He finished the game with a double-double of 21 points and 11 rebounds.

Adam Francolini made his presence known in the second half. He had picture-perfect form on his jump shot, scored 13 points and shot 3-for-6 from downtown.

Darius DeAveiro shared a game-high plus-15 with Nava. DeAveiro was one point shy of a double-double, scoring nine points with 11 assists.

Keeshawn Barthelemy had 17 points and five assists. He was an extremely crafty scorer inside — once he drove, he either kissed it off the glass or altered his shot over defenders with his signature floater. He was 7-for-10 from the two-point territory, but was off from outside going 1-for-11 from downtown.

Cashius McNeilly led all scorers with 26 points, had two steals and seven rebounds. His shooting performance was the exact reverse of Barthelemy’s. McNeilly shot a poor 4-for-14 from the two-point territory, but went 4-for-8 from downtown.

Both Keshawn Barthelemy and Cashius McNeilly were selected for the Biosteel All Canadian Game.