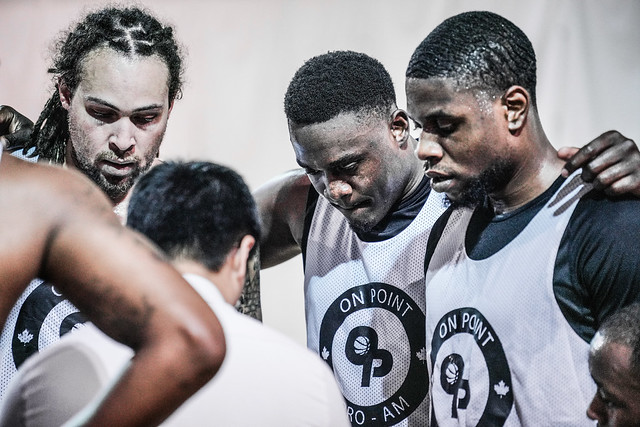 (Toronto, ON) A frantic day at the Toronto Pan Am Centre wrapped up on July 24 as the final, for the first time in On Point Summer Pro-Am history, will not feature both Toben and On Point.

Instead, it will be Toben and X-Men who advance to Sunday night’s championship game. For Toben, it will be their third trip to the final in as many years while X-Men advances to the final for the first time ever.

Here are the final standings:

Five players scored in double figures for Team X-Men, led by Jayden Frederick’s game high 23 points as the team shot 50 per cent from the field overall and hit 38.2 per cent of its triples (13/34).

Frederick wasn’t the only other Ryerson Ram that showed out last night as Yusuf Ali and Warsame Mohamed also had big games. Ali continued to showcase his floor game with 12 points and a game high six assists while Mohamed continues to show off his offensive game as he had 14 points and five rebounds.

Rico DiLoreto had 14 points while Kevon Parchment had 13 points to round out the double-digit scorers for X-Men. The first-time finalists never trailed throughout the game.

Devin Johnson led starting 5, with 22 points. Robert Nortmann had another solid game on the interior with 14 points and seven rebounds while Christian Casimier had 12 points and Reggie Perez had 11 points off of the bench.

X-Men, led by head coach Ryan Xavier, has players that have played with each other at different post-secondary institutions in the past (ex. Ryerson) and that chemistry has been key throughout the season.

After the double-digit victory in the preceding game clinched X-Men a spot in the championship game, it came down to one final game to determine who would take that second spot and face them.

For Toben, their scenarios were to either win or not lose by double digits. On Point was under real pressure in this situation because not only did they have to win… they had to win by at least 14 points in order to advance.

And although Team On Point managed to pull out the win, it was only by five, as Toben advanced to its third straight final, looking to repeat as On Point Summer Pro-Am champions.

It was a game in which foul trouble was the story throughout the game for both teams. A total of 54 personal fouls (25 for Toben, 29 for On Point) were called in the game.

Jamal Reynolds stuffed the stat sheet once again with 11 points, five rebounds and four assists while Jabari Craig chipped in with ten points.

Denny McDonald led Toben for the third straight game in scoring, finishing with 21 points and nine rebounds. James Siakam had 16 points and a team high three steals while Theon Reefer had 13 points.

Freddy Appiah led all players with six assists and hit two big triples to keep Toben near or below that 14-point margin.

It looked like Team On Point would break down that vaunted 14-point threshold as they were up 13 with less than two minutes to go in the game. But Zach Marcelline and James Siakam both hitting contested triples and costly turnovers in the backcourt proved to be too much to overcome for On Point as they are officially eliminated from championship contention.

On Point Summer Pro Am Championship Game: X-Men vs. Toben at 8pm at the Toronto Pan Am Sports Centre on Sunday July 28th, 2019. Admission FREE

Written by Kajan Thiruthanikasalam. Check out Kajan on Twitter.